Mad Men ended tonight in keeping with the spirit of the series and the mini-film that introduced it. Not with a suicide, but with a raft of characters' life shifts with unknown possibilities. Seven seasons ago, if you'd looked closely at the series' 36-second opening title sequence, ushering audiences into the glossy, but conflicted world of '60s Madison Avenue, you'd have known how it all ended -- more or less.

The title sequence for Mad Men that has opened the AMC series since it's 2007 debut is rife with symbolism. Art pundits and superfans alike have imbued the series opener with silhouetted Don Draper's existential spiraling loss of control. But no one except Matthew Weiner, Mad Men's creator and the steward of its story world, characters, and plot, knew that the title sequence foreshadowed the series' entire story arc across seven seasons.

In the iconic opener, viewers see the back of the enigmatic ad man enter an office building and, as that world crumbles, watch him plummet from the skyscraper. Seen from multiple POVs, he falls past juxtaposed ads peddling the post-WWII American Dream -- alcohol, beautiful women, and wholesome family life. All this represents Draper's metaphorical crises of confidence and authenticity, played out season after season, relationship after relationship, ad campaign after ad campaign.

Weiner even teased us with the possibility of Draper's figurative fall from grace transforming into a literal fall to death in the antepenultimate episode, "Lost Horizons." As he enters his new McCann Erickson skyscraper office for the first time, Draper pushes on the sealed window, trapped and uneasy. But Draper falling to his death is not the ending Weiner plotted for the ending seven years ago. "What I envisioned was vaguer, a feeling. The actual concrete version came to me about three or four years ago, and that's exactly how we filmed it," Weiner relayed to AP's TV critic, Frazier Moore. Weiner added, "All I can say is, that we followed the rules of the show."

And follow he did. When viewing the title sequence as a précis to the entire series' themes and rules, we never see the protagonist hit the ground. Deep into the fall, as the silhouetted man hurdles directly into the viewer/camera, the fall stops and the shot resolves on the cypher of a seated man viewed from behind -- reconstituted as an ersatz Humpty Dumpty. And that's exactly what happened to Peggy Olson, Roger Sterling, Joan Holloway, and Don Draper in Mad Men's season finale. Peggy found love and respect right under her nose; Roger finally grew up; Joan let her true voice roar; and Don realized internal peace, which of course he segued into one of the world's best ads of all time for Coca Cola, "I'd Like to Teach the World to Sing (In Perfect Harmony)."

As the series drew to a close, we left all four sitting on that metaphorical couch, in charge of their own worlds. Fitting and in character.

If you watch the main title sequence one more time perhaps you can see the full arc of series and its characters in this brief 36 seconds.

For a behind-the-scenes reveal of the creation of Mad Men's opening title sequence, I interviewed Mark Gardener, the sequence's co-creator and Imaginary Forces' former creative director. Mad Men is one of several vibrant case studies in my upcoming book, Transmedia Marketing: From Film and TV to Games and Digital Media on transmedia storytelling and engagement for media and entertainment from Focal Press in the American Film Market® Presents book series. To follow is a sneak peek of that case study, "Mad Men -- Branding the American Dream" from Transmedia Marketing (publishes June 2015):

The branding for the Emmy award-winning Mad Men, some of the most distinctive and stylized creative work in television, was not an accident -- not if Matthew Weiner had anything to do with it. And Weiner's artistic vision and attention to detail had a lot to do with it. Weiner had been incubating the series about the halcyon years of the post-WWII advertising industry for a very long time. In fact, it was Weiner's 1999 Mad Men script that compelled David Chase to bring him on as a Sopranos writer. After the Sopranos ended in 2007, Weiner tenaciously pursued a network for the drama he believed in. To Weiner, the period in US history from the late 1950s through the early 1970s spoke volumes about past, present, and future life in the US. HBO and Showtime passed on it, but eventually he sold 13 episodes of Mad Men to AMC, a network with no successful original programming to date.

So in 2007, the untested period drama with unknown actors needed a brand and a look. Mad Men's creator Weiner had a clear vision, not only for what the series was about, but also how to communicate it. The series' key theme was encapsulated into the credo of Don Draper, the series' primary ad man, "Advertising is based on one thing: Happiness." Mad Men was a reflection of an era that sold the American Dream, but Draper, as a stand-in for many other Americans, was confused by what that truly meant and how to genuinely find himself within that dream.

It was the irony of this man's success at hawking happiness, while struggling to find a modicum of his own that Weiner wanted to communicate. That and the inner conflict of this Madison Avenue boys' club, who were doting suburban family men on weekends, and hard-drinking, chain-smoking, and philandering rakes during the week.

Imaginary Forces' creative directors Mark Gardner and Steve Fuller were tasked with creating an open that matched the series' complexity and emotion and communicated its core themes. They had two amazing assets to work with: the series' pilot and direct access to Weiner. Weiner wanted the title sequence to communicate two stories: the one that you see, and the real story that you only see in glimpses. And he didn't want it to have a 1960s pastiche look, but rather to be placed firmly in the era. Gardner and Fuller sought a visual style representing the 1960s that was also contemporary. And they wanted to convey the dual life of a man who was both cool and sophisticated, but also out of control.

He essentially didn't even know who he was and he was a conflicted character. We wanted to show everybody that on the surface he's very in control, a very confident person, but is living a lie. And that's something that's obviously come out far more over the seasons, but was there even just in the pilot. And so we wanted to have something that got to that.
-- Mark Gardner, creative director, SYPartners

Weiner presented the concept of a man walking into an office building, entering his office, placing down his suitcase, and jumping out the window. But of course, the title sequence story needed to be much more than that. The creative directors explored the loss of control that falling represents by gathering their favorite falling scenes from films. Saul Bass' final title sequence for the film Casino and many Hitchcock films, including North by Northwest, inspired the creators.

We were trying to get at the heart of what the show was about in falling. It just seemed like this is something everyone recognizes. Everyone dreams about it. It's a very powerful metaphor.
-- Mark Gardner, creative director, SYPartners

And with the benefit of CGI (computer-generated imagery) they created a more modern, stylized look. They had the man fall into a chasm of false and conflicting advertising promises -- from pantyhose and alcohol to wedding rings and families -- abstractly and monochromatically depicted on the sides of skyscrapers. Rather than present the fall in a continuous CGI camera move, it looked like a real film shoot, as if there were cameras on the surrounding buildings creating a variety of shots -- wide shots, medium shots, and telephoto lens shots. 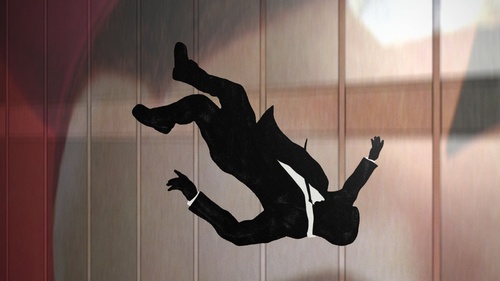 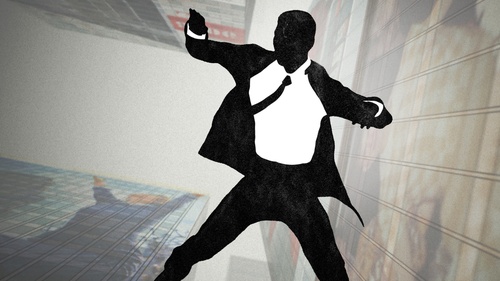 Stills taken from Mad Men; Provided through the courtesy of Lionsgate
The multiple "camera" POVs of the falling man created in CGI.

In early creative rounds, the sequence was one continuous fall. But Weiner wanted something to set up the fall. So the creators created an abstract office world that shattered and led to his fall.

The clincher was how the man was depicted. The creative directors chose the power and mystery of a black and white silhouetted man, ostensibly Don Draper, shown first from behind as he entered an office, echoed in tight silhouetted shots of his foot and briefcase. The motif of the backside of inscrutable figures has penetrated culture -- from the brooding photo of JFK during the Cuban Missile Crisis to the Following fan movie clip montage of people shot from behind on YouTube. 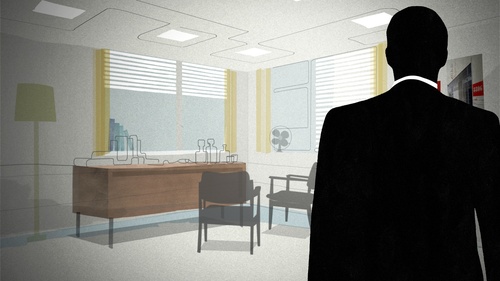 Stills taken from Mad Men; Provided through the courtesy of Lionsgate
Mad Men's Don Draper is a mysterious and conflicted silhouetted man.

And the title sequence resolved on a signature, seated silhouette of an enigmatic Draper, in control, holding a burning cigarette. The silhouette shot sealed the deal for Weiner when Imaginary Forces pitched their initial work to him, and it ended up carrying the series' marketing materials.

It was that image of him from behind, sort of unknowable, but full of confidence and mystique that was the thing. He said, "That's my show. You summed it up in one frame."
-- Mark Gardner, creative director, SYPartners 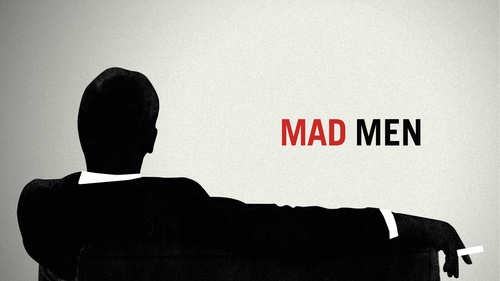 Stills taken from Mad Men; Provided through the courtesy of Lionsgate
The signature final silhouetted shot of Mad Men's title sequence, which drove the series' branding and marketing materials.

The team developed three or four ideas, but it was clear to Weiner that the approach in the final title sequence was the best. But this sequence concept was chock full of problems for AMC and Lionsgate. First, they had concerns about associations of the falling man with photos of 9/11 victims jumping from the Twin Towers. And then there was the overt depiction of an indulgent, if not decadent, lifestyle.

I was witness to some of those conversations such as, "We can't have someone falling out of a building. We can't show someone with a cigarette in their hand. We can't have references to alcohol," which all are there in the title sequence. And Weiner said, "No, we need all of those in." It's quite inspiring to hear someone defend their project. You see how these things can get ruined by people insisting on compromising. And he just didn't.
-- Mark Gardner, creative director, SYPartners

In the end, the network and studio took a chance on Weiner's singular vision and Gardner and Fuller's unique expression of it. Silhouette Man's reappearance, back in control, in the final frame, sold them on Falling Man. To bring the title sequence fully to life, Weiner chose "A Beautiful Mine," a moody and evocative jazz arrangement by RJD2 as the open's theme music. The song has a Hitchcockian quality, akin to Bernard Herrmann's music. Its foreboding is realized with a major break in tone and tempo when the man's world falls apart and he tumbles downward.

Mad Men's title sequence is a 36-second cryptic, dream sequence of a silhouetted man lost and trapped in the American dream that he peddles.

The complete Mad Men case study appears in Transmedia Marketing: From Film and TV to Games and Digital Media, which skillfully guides media makers and media marketers through the rapidly changing world of entertainment and media marketing. Its groundbreaking transmedia approach integrates storytelling and marketing content creation across multiple media platforms -- harnessing the power of audience to shape and promote your story. Through success stories, full color examples of effective marketing techniques in action, and insight from top entertainment professionals, Transmedia Marketing covers the fundamentals of a sound 21st century marketing and content plan.