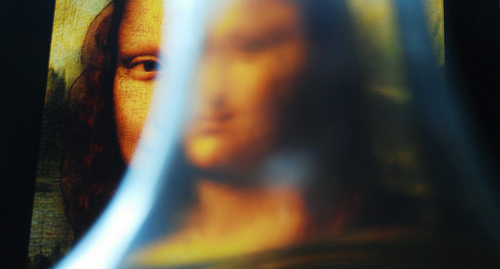 "You are going to hate what I have to tell you about the Mona Lisa," the distinguished art historian Rab Hatfield declared when we met several years ago in Florence. "I am 99.9 percent certain that the woman we see in the Louvre is not who you think she is."

Immersed in research on Mona (Madame) Lisa Gherardini del Giocondo, Leonardo da Vinci's assumed model, I took a deep breath. If he was right, I would end up with the story of the greatest case of mistaken identity in the history of art.

A few months later, Hatfield sent an e-mail with "exciting but also very embarrassing" news. He had come upon an "astonishing letter" in the Florentine archives that convinced him that "we probably do see Mona Lisa Gherardini in the portrait after all."

Sworn to secrecy until Hatfield published his meticulously documented findings in The Three Mona Lisas earlier this year, I report his revelations in the newly released paperback edition of Mona Lisa: A Life Discovered. Among the most intriguing:

1. Two of Florence's political leaders hit on Mona Lisa.
The letter dated September 26, 1515 -- ten years after Leonardo worked on the portrait -- shares the juicy gossip that two twenty-something scions of the city's power elite, members of the Medici and Strozzi families, had "tempted...Mona Lisa in her honor."

2. Mona Lisa proved herself a faithful and virtuous wife.
Lisa, the 36-year-old mother of six children, rejected the men's advances. Outraged, her would-be suitors vowed to bring about her husband's ruin. However, they seem to have relented after she privately met with one of them: Lorenzo di Piero de' Medici, 13 years her junior and a grandson of the great Lorenzo Il Magnifico. ("Lorenzino" died, allegedly of syphilis, four years later.)

3. Her husband behaved like a cad.
Francesco del Giocondo, never questioning the truth of the accusation, responded, not with righteous anger over the insult to his wife's virtue, but with abject apologies for her disrespect -- which the noblemen mocked.

4. Mona Lisa's mate was despised as a profiteer and a loan shark.
Despite considerable wealth, Francesco became the most aggressive plaintiff in the Florentine Merchants Court, targeting "little people" and pouncing on their possessions if they couldn't repay their small loans.

5. Mona Lisa's sister sullied the family reputation.
In 1512 her cloistered younger sister Camilla, along with three other nuns, was publicly denounced for engaging in "obscenities" with several young swains who had climbed over their convent's walls for a nighttime rendezvous.

6. Leonardo didn't paint the Mona Lisa solely for money.
"There must have been something special about Mona Lisa -- something that made her more 'paintable' than most other Renaissance wives," asserts Hatfield, who has devoted a lifetime to studying Renaissance masters. Perhaps the enigmatic smile that Leonardo had experimented with in other paintings?

7. Leonardo painted three versions of the Mona Lisa, one on top of the other.
The artist began his portrait of Mona Lisa on a poplar wood panel in 1503 but set it aside to work on a civic mural. Returning to the painting between 1504 and 1506, Leonardo tinkered with his model's features and placement. Years later, as sophisticated imaging techniques reveal, he added subtle shadings and adorned her with long "fairly bright red" tresses (since faded into brown) to create what Hatfield calls the "third Mona Lisa" -- the portrait we see in the Louvre.

Mystery may always swirl around this most famous of paintings and its subject, but one thing remains certain: Five centuries after a genius immortalized her, the world cannot stop looking at the Renaissance woman whom everyone recognizes -- and whose secrets we are just getting to know.

Author of the best-selling LA BELLA LINGUA: My Love Affair with Italian, the World’s Most Enchanting Language and MONA LISA: A Life Discovered.