"The truth is I am too many years ahead of this age... and the unenlightened mind of the average man." -- Victoria C. Woodhull to reporters about her 1872 Presidential campaign

Nope, Hillary wasn't the first. Before her there was Victoria C. Woodhull. I hear you asking, "Victoria who?" Most people haven't ever heard of this 19th century female suffrage icon, but she was a revolutionary woman before her time. Here are seven things she can teach us about being strong, modern women: 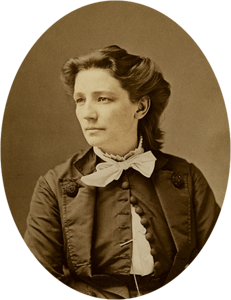 Now, don't get me wrong, Victoria was no saint. There were plenty of things about her that would be controversial even today. She was a proponent of Free Love (meaning that she believed marriage shouldn't be a legal institution, but rather left up to the individuals involved). She had Communist leanings and later in life espoused eugenics, a controversial science. She also had several husbands and possibly multiple lovers.

But does that mean she can't be a role model for women today? Hell no! Victoria knew no fear and neither should we. No matter what your dream is, chase after it with all you have. Victoria's may not have come true, but she changed history pursuing it and so can you.