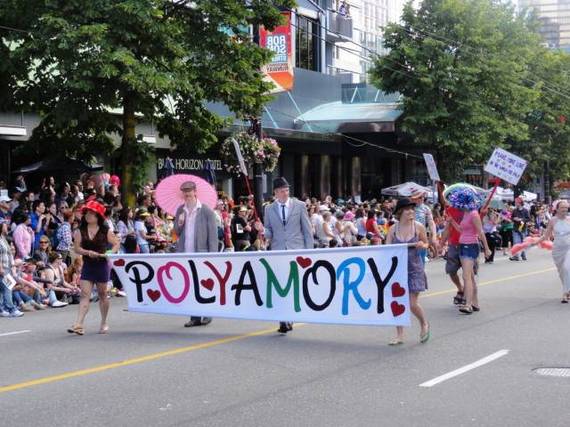 There are many forms of consensual non monogamy, ways which people in a relationship negotiate sex and intimacy outside of traditional norms. From car keys in the middle of the room swinging through hand-fasted triads, to relationship anarchy, people have been saying for a while now that there are other ways of doing relationships. Of course, as many advocates of polygamy will point out, traditional depends on where you are standing, and there are a number of cultures across the world who have had different models of how adult relationships can work

Whatever someone calls their way of doing relationships, they encounter the same questions, preconceptions and stereotypes from monogamous people.

1. You must be sex mad!
Some forms of consensual non monogamy are based around sexual encounters, swinging for example. In swinging single people and couples believe that sex is not just reserved for those with whom you have an emotional bond. However, many swingers will only "play" (a term which highlights the easy going, light hearted attitude taken to sex) with those they have built some form of an emotional relationship with. There are very few hard and fast rules around swinging, other than the golden rule of consent.

Many non monogamous people however do not see their relationships as about more sex, but more love, that is what polyamory means after all -- "many loves." For them the idea that they are just looking for more sexual partners is hurtful, it's about love, emotional connection, not bed hopping. A joke in policy circles is that you need google calendar more than you need a bag of sex toys!

2. I could never have an affair
So often people confuse being unfaithful with polyamory, and its probably the statement which causes more anger than any other. Poly, or whatever form of consensual non monogamy someone practices, is consensual, but people seem to skim over the all important "c word." If you are deceiving a partner, going behind their back, it's not polyamory, it's not consensual for all parties involved. If you ever want to see sparks fly, mention those on poly forums and sites who claim to be poly, but without the consent of their partners. Whilst it is of course difficult if you realize after marriage that you and your partner have different views on monogamy, the ethical solution is to talk, and negotiate. I know from my client work that this is not as impossible as some might suppose. If you are meeting others without the consent of your partner, its a lot of things, but it is not poly.

3. It must be wonderful to never get jealous.
There are some people who don't seem to get jealous. There are far more people who know that jealousy is a destructive emotion, which eats away at our joy and happiness. Choosing non monogamy does not mean you do not get jealous, there isn't a handy switch you can turn off. For many poly people it's about accepting that jealousy isn't a positive emotion, and working through their feelings rather than giving full reign to them. They may well be jealous, but, they choose not to let the emotion control things. The lovely polar opposite of jealousy is compersion, a beautiful concept, pleasure in a partner's relationship with another.

4. But what about the children!
It's a cry many LGBTQ people are used to hearing, and many Pride parades will have a poly section, as a lot of similar prejudices are faced. I can safely say, as a therapist, and parent, children need love, support, acceptance, and the makeup of the family which provides that is far less relevant to their health and happiness than the fact it is provided.

5. But who do you really love?
In some ways this is like the question children ask their parents -- "But which of us do you love the most?" It can be difficult to explain that love doesn't work like that, your children can be very different, and yet loved equally. So it is for poly people. Some do have primary partners, someone they see as their life partner, whilst others dislike this as too hierarchical.However most poly people reject the idea that a relationship is somehow more real or valid because its with one person, over another. The relative new concept of relationship anarchy challenges the idea that people we have sex with should have primacy. It may sound odd, but how many of us have a close friend, who sticks with us through thick and thin, who is always there when a relationship ends? These friends know us better than any partner, and relationship anarchy suggests should not be considered a lesser relationship.

6. Will you sleep with me?
This is often put less politely, but it's a common question . Related to the first point, just because someone is not monogamous, doesn't mean they want to have sex with you. So many poly women and nonbinary people have told me this is a huge issue for them. The minute they mention they are non monogamous huge assumptions are made. It is important to remember that many poly people only have sex within committed emotional relationships, so no, they probably aren't going to get naked within seconds of meeting you.

7. I could never convince my wife to do that
This infuriates for two reasons. Poly is about all parties agreeing, not about coercion, or convincing someone to do something against their will. Poly is not for everyone; I personally believe some people are naturally inclined to be monogamous, and others are not. It is also suggesting that women are not active in, or desiring of poly, but are led by male partners and husbands, who have forced them into it. Women can, and do, suggest exploring polyamory, and want polyamorous relationships.