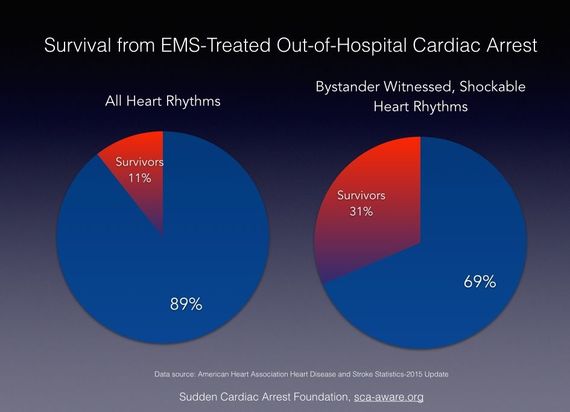 Sudden cardiac arrest (SCA) is a leading cause of death in the U.S., affecting about 326,200 people of all ages outside hospitals every day. Dave Goldberg, CEO of Survey Monkey and husband of Sheryl Sandberg, Facebook COO, was one of its recent victims.

During this week alone, about 6,250 unsuspecting victims will suffer SCA, most of them (70 percent) at home. Their hearts will unexpectedly stop beating and blood will no longer flow to the brain and throughout the body. They will collapse, stop breathing normally, and may appear to be having seizures. In essence, they will be dead -- and they will stay this way unless bystanders act immediately to restore their heartbeats with CPR and defibrillation.

Unfortunately, only one-third of SCA victims receives CPR from bystanders and fewer than five percent are treated with automated external defibrillators (AEDs) before EMS arrives at the scene. But for every minute that passes without CPR and defibrillation, the chances of survival decrease by 7-10 percent. As a result, only 11 percent of victims typically survive. Yet survival rates could double or triple if more people knew what to do when SCA strikes. In fact, as many as 50,000 additional lives could be saved each year.

Why don't more people know and use these fundamental lifesaving skills? Seven common myths may be barriers to bystander action.

Given the facts and the tremendous opportunity to save so many more lives, we urge the public to seek CPR and AED training during the first week of June, National CPR-AED Awareness Week. Our growing survivor network is a testament to the fact that immediate CPR and defibrillation saves lives. Since most cardiac arrests occur in the home, taking a few minutes to learn CPR and how to use an AED could mean the difference between life and death for your loved one.

Advertisement
You can save a life. Here's how: