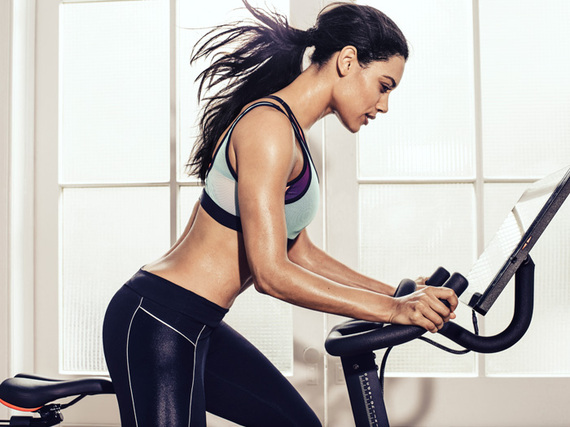 By Amy Marturana for Well+Good

Thanks to the fast-paced, push-you-to-your-limits, and forget-your-worries nature of a spin class, it's easy to let everything go--including proper technique--the moment you jump on bike and the music grabs you.

But when it comes down to it, your attention to (or disregard for) form and other best practices will determine whether you're basking in sweaty endorphins afterward, or nursing a strained muscle.

"Preventing injury is part of every workout," explains top Peloton coach Steven Little, a serious indoor cycling pro who was one of Flywheel's founding instructors and has been teaching spin for close to nine years. "We tend to work hard and sometimes try to do everything and not listen to our bodies."

And if you're not as seasoned or have had instructors who don't cue for good form, you may not even know you're doing it incorrectly or inefficiently, he says.

To make sure you're riding right, we asked Little to break down the common mistakes riders make in class, and how to fix them, so you get the most out of every sweat session. And we're pretty sure you want that to happen if you showed up at 7:00 a.m.

Here are the seven things you may be doing wrong in spin class, and how to fix them:
1. Tensing your shoulders. We know the ride is intense, but that doesn't mean your posture should be, too. Relaxing the shoulders is "a really common thing instructors remind riders of throughout class," Little says. You want to sit up straight, back comfortable and not over-arched, and avoid drifting over the front of your handlebars. But you should also keep your shoulders relaxed, not up by your ears, and look straight ahead, not down at your feet, to avoid unnecessary strain (and potential injury) in the neck and back.

More:
healthy livingspinningCyclingpelotonsoulcycle
Newsletter Sign Up
The essential guide to taking care of your mind and body
Subscribe to HuffPost’s wellness email
Successfully Subscribed!
Wellness delivered to your inbox