The moment I saw the photograph--a grave enclosed in an iron cage--I knew there was a book in it for me. The online article I'd stumbled across was brief and uninformative, claiming that this girl's family caged her grave because they thought she was a vampire (or maybe a werewolf). Even the location of the grave was obscured in the article, listed as "near Rorhbach's outside Catawissa, Pennsylvania." 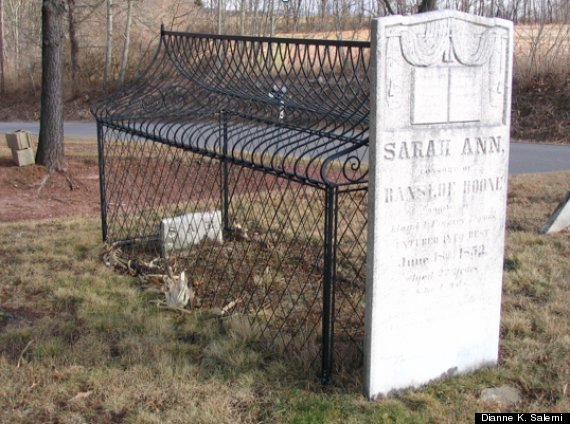 I had to see it. No matter what the explanation for this grave was, I knew it wouldn't satisfy me. This was going to be one of those stories that left me chilled in spite of anyone's attempt to debunk it. I'm attracted to unsolved mysteries, especially bizarre ones. If there's a "rational explanation," so much the better, because it's somehow even creepier when a reason is given and it makes no sense.

I wrote my first novel, We Hear the Dead, about Maggie and Kate Fox, teenage sisters who claimed the strange rapping noises that followed them everywhere were messages from spirits. In 1848, they were contacted by the ghost of a murdered man supposedly buried in the basement of their house. Forty years later, Maggie Fox admitted that she and her sister created the rapping noises by cracking the joints in their toes. Mystery solved. Except ... witnesses claimed the spirits proved their otherworldly knowledge by rapping out the ages of everyone in the room. How many times in a row can a person crack a toe joint? Is it possible to do it 33 times, as testified in numerous accounts? And under the observation of a physician, no less? History has dismissed the Fox sisters as frauds, but no one has ever satisfactorily explained everything they did.

As for the caged grave, my husband tracked down the cemetery with Google Earth, and we took a drive to Catawissa. The Hooded Grave Cemetery was just beyond Rorhbach's Farm Market (Aha!) and when we pulled the car up beside the gravestones, we found not one, but TWO caged graves.

The article never said there were two.

Both graves belonged to young women. They were related. The married name of one was the maiden name of the other, and they died within a couple days of each other. Instantly captivated, I started making notes for The Caged Graves even as my husband drove away from the cemetery.

Research turned up possible explanations, and they were as unsatisfying as I expected. Were the cages mortsafes, meant to protect the graves from "resurrection men?" Most mortsafes are removed within a few weeks. Were they decorative, meant to display the affluence of the family? No amount of delicate filigree can change the fact that these are cages. As for vampires, that word didn't enter popular lore in North America until Dracula was published, several decades after these young women died.

When it comes to these graves and other mysterious events, I think the truth lies somewhere between the "rational" explanation and the dark flights of our imagination. And if not the truth, then at least a really good story.