The best way to predict the future is to create it. ― Peter Drucker

Whitney Johnsonis the leading thinker on driving corporate innovation through personal disruption. Johnson co-founded Rosa Park Advisors, an investment firm with Clay Christensen. Johnson is a frequent Harvard Business Review contributor and a successful author who was named by Fortune Magazine as the most influential women on Twitter. In 2015, Management Thinkers50 (described by Financial Times as the "Oscars of management thinking") named Johnson among their top 50 most influential management thinkers in the world. In her brilliant new book Disrupt Yourself, Johnson beautifully architects a map for personal disruption using the S-Curve developed in the early 1960s. 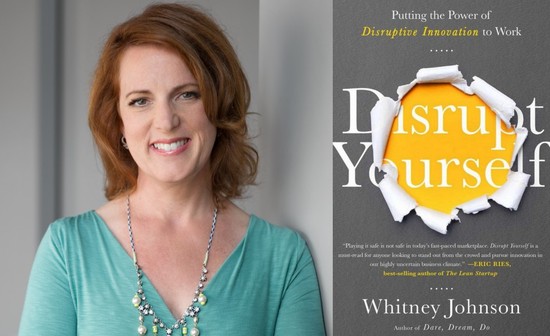 Developed by E.M. Rogers in 1972, the S-curve model attempts to make sense of non-linear world by illustrating the how, why, and at what rate ideas and products are adopted. Johnson very simply articulates the S-curve as the following: "Adoption is relatively slow at the first, at the base of the S, until a tipping point, or knee of the curve, is reached. You then move into hyper-growth, up the sleek, steep back of the curve. This is usually at somewhere between 10-15 percent of the market penetration. At the flat part of the top of the S, you've reached saturation, typically at 90%."

Johnson's thesis is that the S-curve help us understand the psychology of disruption ourselves. At first when we try something new the progress is slow but as we hit the steep part of the curve, the fun begins. As we near the peak of the curve, we are no longer emotionally rewarded. Johnson notes that with learning, progress doesn't follow straight line. In order to reach mastery, we need to find ways to manage ourselves along the S-curve journey. In her book, Johnson identifies seven variables that can speed up or slow down the movement of individuals or organizations along the curve.

The seven variables to reach mastery along the S-curve are:

1. Take the right risks - taking the right risk is about knowing the job that needs to be done. It's about focusing on what problem the customer need solved. Taking the right risk is also about identifying the job you want done. It is important to remind yourself that starting something new means taking a risk. And there are multiple kinds of risk. In business you must be able to distinguish between competitive risk and market risk. Studies have shown that market risk have six times the rate of success and 20X the revenue potential as compared to competitive risks. To select the right kind of risk is also involves avoiding the wrong risks and identifying jobs that no one else can do.

"Start with figuring out the jobs you want to do, then position yourself to play where no one else is playing. Trying something new is less risky and ultimately more satisfying," said Johnson.

So how do you identify what you do well? Start by asking the following questions:

Once you can match your strengths to unmet needs it is also important to make sure you are passionate about the work. Don't be surprised if you are overwhelmed by new tasks, new people, new information and unforeseen obstacles. You are the bottom of the S-curve now so this is to be expected.

3. Embrace constant constraints - constraints are not a bad thing. Constraints offer structure that can liberate us from the chaos and disorder of entropy according to Johnson. Here are the benefits of constraints:

So what are the most common kinds of constraints? One common constraint is money. Lack of experience or knowledge can restrict our growth. But lack of experience can also be an advantage. I was asked to run a marketing organization and be the CMO of a half-a-billion dollar public company with very little marketing experience. By adopting a customer focused approach and a beginner's mindset, I was able to rebrand the company, deliver new services and grow brand awareness in very little time with very little resources. Time is also a constraint but with the right amount of focus, trust, and resourcefulness, time constraints can be managed. There are also invisible constraints like depression and illness.

Johnson references 'A Beautiful Constraint' by Adam Morgan and Mark Barden, providing six steps for transforming a constraint into something useful:

Johnson reminds us that constraints give us something to push against. "Constraints keep up grounded, and staying grounded gives us traction. Constraints aren't a check on our freedom, but rather a valuable tool of creation," said Johnson.

You will achieve the greatest results in business and career if you drop the word "achievement" form your vocabulary and replace it with "contribution". - Peter Drucker

4. Battle entitlement - Entitlement is the belief that something is owed to you by life, comes in many guises, and is the innovation killer according to Johnson. There are different types of entitlement - cultural, emotional, and intellectual. In all cases, entitlement will stifle innovation at all levels, from organization to individual. Here are the antidote to entitlement types:

Advertisement
You must be able to disrupt yourself before disrupting others. If you feel the world owes you something, then you will significantly slow down your ride on the S-curve and potential stunt your ability to be disruptive. Plus, no one really like people who feel entitled to things. Be likable and give more than you take.

5. Step back to grow - sometimes the only way up is down. "Disruption by definition involves moving sideways, back, or down, with all the negative connotations and conjures, in order to move forward," said Johnson. One element of stepping back is rethinking your metrics.

"A disruptive innovation must measure different attributes of performance than those in your current value networks," said Johnson citing Clay Christensen. Learn to recalibrate and redefine success metrics as you ride the S-curve. Be adaptable and curious.

You have learnt something. That always feels at first as if you have lost something. - George Bernard Shaw

6. Give failure its due - Johnson reminds us that our hatred of and shrinking from failure typically starts when we are children. But to accelerate our growth, we must learn to fail gracefully.

"When you disrupt, you are walking into the unknown, exposing yourself to the risk of failure," said Johnson. The key is to recognize that it's not a matter of if, but when. Johnson reminds us that failure is heartbreaking, shameful and often very upsetting. "If you let a failure become a referendum on you, the millstone of shame will drown you and your dreams," said Johnson. The key is for us to learn from our failures and to construct a positive personal narrative. My favorite excerpt from the book is knowing when it is okay to quit:

"One lesson you might learn from failure is that you are on the curve for you. Famed football coach Vince Lombardi said, "Winners never quit." Marketing guru Seth Godin countered with, "Winners quit all the time. They just quit the right stuff at the right time."

7. Be discovery driven - "One of the key attributes ascribed to disruptors is that they play where no one else is playing," said Johnson. To have this level of unique insight we must be able to develop a discovery-planning process. Johnson references a plan archicture developed by Rita Gunter McGrath and Ian MacMillan with four steps to develop this plan:

The only way of discovering the limits of the possible is to venture a little way past them into the possible. - Arthur C. Clarke

A discovery driven career requires us to explore and not be afraid of discovery. Johnson reminds us that we can't see the top of the curve from the bottom and that often you can find yourself in places that you hadn't anticipated. You are not alone. Research shows that 70% of all successful new businesses end up with a strategy different from the one they initially pursued. They key is to follow your north start (core values and guiding principles) and know that as you start your journey of personal disruption, you are in search of yet-to-be-defined places. You are an explorer, driven by new learning opportunities to contribute to something that is important to you and others.

Surfing the S-curve of your own personal disruption is challenging, rewarding, exhilarating and fun. But it can also be scary and lonely. To avoid crashing while your surf, you must follow the 7 variables highlighted by Johnson in her amazing new book 'Disrupt Yourself'. I personally disrupted my own career recently and I am delighted by the outcome.

I love Whitney Johnson's new book - a smart and highly inspiring read. Each chapter references several examples of business and personal disruption. Each chapter includes specific stories of success, near failure and contributions based on adoption of these seven important S-curve variables. Disrupt Yourself is a must read for business executives and professionals at all levels. The book will surely guide you throughout your life and career as you ride the wave of success towards a fulfilling and prosperous place of happiness.

You can watch the interview with Whitney Johnson on my weekly show called DisrupTV (Twitter: @DisrupTVShow) with co-host Ray Wang, here.