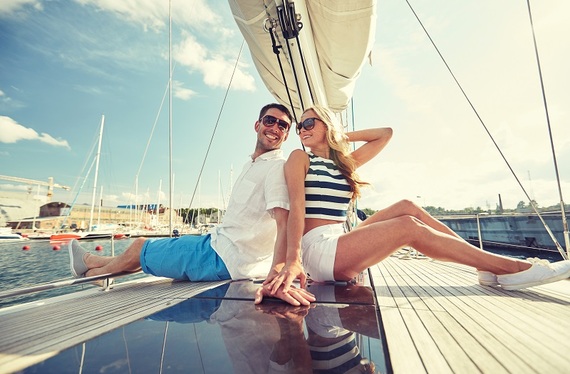 Champagne wishes and caviar dreams might seem out of reach for travelers on a beer-and-burger budget. But with a little research and planning, a vacation filled with private jets and luxury accommodations doesn't have to be a far-fetched fantasy. If you'd like to vacation like a millionaire without refinancing your mortgage or sabotaging your credit score, try these seven travel tips to add a little grandeur to your next getaway.

Vacation rental sites can make it easy to search for luxury rental properties. And because many available rentals accommodate a dozen or more guests, they can be cheaper per person than renting rooms at even the most basic hotel if you're booking for a group.

"If your group needs more than one hotel suite, then usually Airbnb will get you a luxury accommodation for the same price," said Alex Gerard, founder of the financial services site cardsmix.com.

HomeAway.com, for example, offers a five-bedroom, four-bath, ski-in/ski-out home in Montana that sleeps 12 and features a hot tub and wood-burning fireplace. Although prices vary by season, the property is available for around $600 a night, excluding taxes and fees, from Aug. 28 through Aug. 31. That's about $50 per person for a dozen guests. In contrast, the least expensive room -- a double queen -- available for those dates at the nearby Lodge at Big Sky is about $180 a night before taxes and fees.

2. Book a Private Plane (or Yacht)

Sites such as JetSuite open up private air travel to vacationers who want to be part of the jet set but don't happen to own their own planes. According to the JetSuite site, you can book a plane for an "all-in average block hour rate" of around $5,000; however, JetSuite's site also offers a SuiteDeals section that features last-minute daily flights starting at $536 each way for the whole jet.

Last-minute options for July 27, for example, included a jet that could accommodate six passengers on a flight from Miami to West Palm Beach, Fla., for $536.43, or less than $90 per person. That compares favorably with a last-minute coach seat on U.S. Airways or American Airlines for $327.20 based on an Expedia search of the same date.

And if air travel seems too run-of-the-mill, you can always book a yacht at GetMyBoat.com.

3. Visit in the Off-Season

"One way to travel like a millionaire is to stay in five-star resorts off-season," said Liz Dahl, founder of BoomerTravelPatrol.com. "The views will be the same, the accommodations will be the same, but the prices will be slashed in half."

Take Hix Island House, located on the island of Vieques just off the southeast corner of mainland Puerto Rico, for example. Hix Island House offers accommodations that feature private patios, fully stocked kitchens and -- in most cases -- outdoor showers that let you take in the beautiful view while you freshen up.

Vacationers who visit during the off-season stand to save a lot at this idyllic locale. From Jan. 4 through April 4, 2015, rates were listed at $450 a night for a two-bedroom loft in the property's Casa Solaris building. From April 5 through Dec. 23, 2015, rates start at $345 for the same space but climb to $725 a night, excluding taxes and fees, for a few days around Christmas. So, unless you're set on celebrating a feliz Navidad on Vieques, it makes sense to visit when rates are more affordable.

4. Plan Ahead When Dining Out

Wine experts recommend buying the bottle rather than opting to pay by the glass at restaurants, according to LearnVest, because the markup is typically much higher for a single pour than for a bottle, which will give you about four six-ounce glasses. Looking for restaurants that allow diners to BYOB, asking for deals on bottles that might be in short supply and opting for less-conventional varieties are also savvy saving strategies.

And remember that using coupons isn't limited to grocery shopping. Search sites such as Restuarants.com, Entertainment.com and Groupon for great deals before you travel. You might be surprised by how many high-end eateries offer discounts. For example, Groupon is currently offering a $99 deal that gives buyers a four-course prix fixe dinner for two and a bottle of sparkling wine -- valued at $186 -- at The Grill restaurant at the Ritz-Carlton, St. Louis.

5. Visit Countries Where a Dollar Is Worth More

Consider a trip outside the U.S., Canada or Europe to exotic locations in South America, Africa, Asia or India, where food, attractions and accommodations typically cost a lot less and the exchange rate falls in your favor.

At the five-star Conrad Hotel in Bangkok, for example, the lowest rate available on Aug. 23 for a deluxe room with a king-size bed is 3,710 Thai baht (around $106) a night before taxes and fees, while the best rate for a comparable room at the Conrad Hotel in New York is $238, according to the hotels' websites.

6. Use a Travel Rewards Credit Card

Using travel rewards credit cards can help you earn points that can be redeemed for hotel rooms, flights, rental cars and more. Some credit cards, such as Delta's SkyMiles cards, also offer other perks, including discounts on in-flight purchases, a free checked bag and priority boarding. While it might take a while to save up enough points for a free flight, the points can often be traded in for an upgrade on an existing reservation.

"Another way to travel like a millionaire is to save up your airline miles and upgrade yourself to first class," said Dahl. "Not only will you travel like one, but you might end up sitting right next to one!"

7. Leverage Your Loyalty and Manners to Ask for Upgrades

Dan Nainan, a professional comedian who has performed in 24 countries and traveled to more than twice that many in total, always flies the same airline to ensure he gets the best seat available on his long and frequent flights. He also isn't afraid to trade politeness for perks.

"Be extremely friendly and make friends with flight attendants, hotel personnel, car rental agents," he advised. "It's much, much easier to be upgraded to the nicer car, the hotel suite, or first class if you are nice."

This article, 7 Ways to Travel Like a Millionaire -- on a Budget, originally appeared on GOBankingRates.com.