Art the change you wish to see in the world.

As I walked along the streets of Denver, it was evident how much America craved this refreshed, creative spirit. Everywhere we went, crowds swarmed around us. People, young and old, were excited by the opportunity to express themselves by making their own unique spray-paint T's. We always knew that if everyone did his or her part, then we would win the election. Witnessing the success and the joy that the ObamaMobile -a car, stencils and spray-paint- brought to the convention, Annie and I decided that art was what we could do. We needed to bring change through art to people in all the battleground states across the country to foster social and political consciousness, and, ultimately, get Obama elected.

People were skeptical, and I don't blame them; driving over 7,000 miles in a painted van we didn't yet have, with less than two months remaining till the election seemed daunting, to say the least. Then, with time running out, we found our 1986 Volkswagen Vanagon, had it inspected at a shop, and got it smogged. And we were never sure we'd have enough money to do any of this, so for the first time, I paid for something on my credit card that I didn't have the money for, only to have the engine explode ten minutes after we handed over our life-savings. 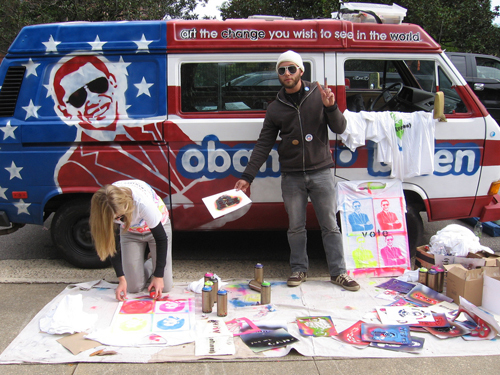 Annie Woods and Gadi with the BamaBus. Photo: Emily Graham

We believed in an America where people would paint a van, travel across the country, do art and meet people. We weren't officially part of the Obama campaign, no one paid us to do anything, but we believed in campaigning creatively and energizing our supporters.

Traveling across the country is an eye-opening and humbling experience. As worldly as our internet browsers may be, we need to get out from behind our laptops and start talking to each other again. Each conversation, both when we agreed, and even more so, when we didn't, enriched my perspective on the varying ways Americans practice Life, Liberty and the pursuit of Happiness. And, while the way these practices materialize very differently in California than in they do in New Mexico, or Iowa, or Missouri, we are all looking for respect, opportunity, and the chance to bequeath generations of Americans with a country they can invest in and be proud of.

We set out to refresh America's imagination. We found community.

We drove 7,034 miles from California to Pennsylvania and down to Florida in 31 days; we made over 1,500 handmade t-shirts; we were in a parades; we were at Obama's 100,000 person speech in St. Louis; and we even got to hand Michelle a t-shirt we made for her in Minnesota. But, the real story is the people we met along the way. Young and old, all over the country, we met supporters and cynics that welcomed us, offered us a warm meal, a shower, and, on the cold nights, even a roof over our heads. At 55 miles per hour on the highway, we got peace signs from truckers, got our photo taken and even rolled down the windows to have some high-speed conversations.

For most, this was the first time in their life that they ever held a can of spray-paint, and many hadn't made "art" since 5th grade with Mrs. Johnson. As they held down the stencils and sprayed, and even more so when they proudly displayed their masterpieces, we could see that they felt as though they were riding along with us on the BamaBus.

Every so often, we'd be driving at night on a smaller highway that goes through a town. As we passed the strip sure enough there would be one storefront with the lights still on, a small handful of people working on computers or organizing papers and some Obama signs. We'd pull over and with some pre-made shirts in hand and go talk with the unsuspecting organizers and volunteers. These are the people that were doing the real work in winning elections: making phone calls, knocking on doors, distributing literature; and to them, we were kind of like their eleventh hour Obama Fairies. They'd take pictures with the bus, in many cases freak out and call their Obama friends, but what stuck is how they said thank you.

We saw a country hungry for creative outlets, and as times get tough, we need to consider the Arts. In order to overcome the challenges ahead, we need to think creatively. This generation of young people, with technological advances, stands to be the most creative yet. In order to nurture this necessary creativity, we must invest in the Arts. Art builds community, creates culture, and has dividends that permeate into the economy.

Yes, we can; Yes, we did. With creativity and community, together, Yes, We Will.

See you at Inauguration.

•••••
The BamaBus was recently featured in TIME Magazine's Person of the Year Edition.

Come find the BamaBus in DC at the Manifest Hope Gallery. 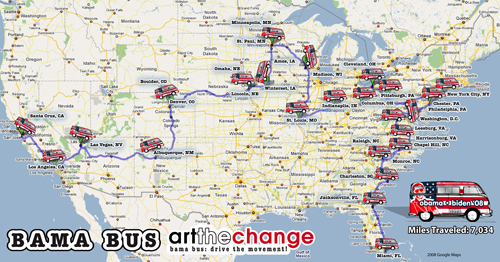