Ever feel like you're tweeting but no one's reading? Well, most of the time, you may be right.

That's according to a study conducted by Sysomos, a media monitoring and analytics firm, which examined 1.2 billion tweets sent in August and September 2009.

Wired reports on their findings, which suggest that a Twitter's lifespan may be little more than an hour in length:

They discovered that more than seven in every 10 tweets sink without any kind of reaction from the world. Of the remainder, just 6 percent get retweeted, and 92 percent of those retweets occur within the first hour. Multiplying those probabilities together means that fewer than one in 200 messages get retweeted after an hour's gone by. Essentially, once that hour's up, your message is ancient history.

As Wired notes, 23 percent of tweets get an @reply, with the vast majority (85 percent) getting only a single reply. Noting that "only 1.53% of Twitter conversations are three levels deep" (i.e. there are three @replies), Sysomos concludes, "only a small number of users actually have the ability to engage on Twitter in a significant way." The report also found that nearly 97 percent of @replies will occur with the first 60 minutes after the tweet was posted.

The study did not investigate why a relatively low number of tweets fail to generate a reply or retweet. Perhaps it's tied to Twitter's format, which quickly pushes down old posts--if so, it will be interesting to observe whether the redesigned "New Twitter" will encourage more users to engage with the tweets they see--but it could also be that we're saying doesn't always interest our followers.

A study of tweets conducted by Rutgers University in 2009 found that the majority of Twitterers (80 percent) are "meformers" who use Twitter to "post updates on their everyday activities, social lives, feelings, thoughts, and emotions." Twenty percent are "informers" who post information to their followers, from links to articles to breaking news.

Before you stop tweeting, keep in mind that the study determined how often tweets were "ignored" using the number retweets and @replies a post garnered--but seems to have overlooked tweets that are read by followers (i.e. they do not go unnoticed), but neither retweeted nor replied to. As HuffPost commenter Gregstevens writes (see below), "[J]ust because a tweet hasn't been replied to or retweeted doesn't mean it is being ignored. I maintain a twitter account that I use to promote a website. When the website posts new original content, I will tweet some kind of little advertising "blurb" about the article, with a link. I will do this approximately every hour. I will try to use a different "blurb" to get attention to the article each time, to be able to catch the interest of people scanning or searching for different keywords. Almost NONE of these tweets of mine are replied to or re-tweeted. But I can see that it's driving traffic to the website: hundreds of hundreds of hits arriving from the twitter links, with "spikes" of hits coinciding with the hourly tweets that I post."

See charts from Sysomos below. Do you feel like your tweets are ignored? Do you agree that "only a small number of users actually have the ability to engage on Twitter in a significant way?" Are @replies a fair measure of this? 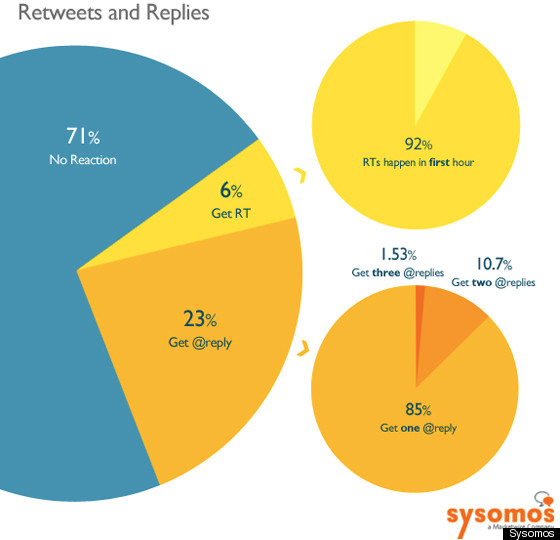