A lively, multigenerational group of Muslims and Jews has been meeting up on Mondays at the Silver Lake Jewish Community Center in Los Angeles. But this isn’t your average interfaith workshop.

There's no lecture from a rabbi or an imam delivered from a podium. There’s no documentary being screened and there are certainly no panel discussions to round out the night.

Instead, these interfaith friends are bonding over delicious, delicately crafted mocktails.

This project, called 72 Virgins, aims to bring Muslims and Jews together to socialize over a drink. It blossomed out of NewGround, a Los Angeles-based interfaith organization. 72 Virgins co-founders Saba Mirza, 34, and Howard Seth Cohen, 41, met while they were both fellows in NewGround’s Professional Fellowship program. They wanted to find a way for Muslims and Jews -- including even secular members of the two traditions -- to meet and mingle in a completely natural way.

“There’s something that happens when you’re standing with a group of people over a drink. It opens up a window to the other person,” Cohen told The Huffington Post. “We were looking at how we could create that kind of environment for all kinds of people.”

During the 72 Virgins mocktail workshops, Cohen guides participants through a drink demo, then lets them loose with the ingredients. Since the classes started in April, they've gotten participants who range in age from young professionals to septuagenarians.

Cohen, a self-taught cocktail connoisseur, says non-alcoholic drinks can actually be quite complex and sophisticated. Usually, a balance of sweet and sour flavors is used to lessen the bite of alcohol. But something special happens when that third element is taken away.

"When you remove alcohol from the equation, you're able to create these amazing beverages that have a multitude of flavors," Cohen said.

It’s also been refreshing for Mirza to know she’s no longer limited to cheap, sugary drinks when she’s at a restaurant with her friends.

“As a Muslim who doesn’t drink, it’s always been really frustrating for me to go to different places and look at all these cool drink menus with all these crazy funky names, and the only thing I can order is a virgin mojito or a Shirley Temple,” Mirza told HuffPost. 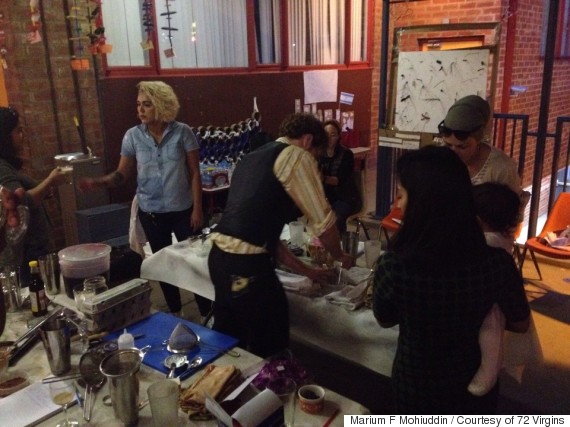 The organizers usually leave time at the end of the workshops for candid discussions. In this environment, it becomes easier for people to raise the questions they might otherwise be nervous about asking.

One of the questions that has come up involves the group’s provocative name.

"72 virgins" is a phrase that’s often been misinterpreted, Mirza says.

The phrase is found in a secondary Islamic text called the hadith, and some religious extremists have interpreted it to mean that martyrs will be rewarded with 72 virgins in paradise -- an interpretation that Mirza says just doesn’t fit with progressive Islam today.

“As a Muslim woman, it’s very offensive to me,” Mirza said. “I don’t believe this is what Islam is about at all.”

She notes that Islamophobic people have also seized upon the phrase, using it to ridicule the faith of the world’s 1.6 billion Muslims.

“It’s time for us to start taking this language back,” Mirza said. "It's about being able to talk about these difficult topics in a lighthearted matter."

Below, check out one of Cohen's mocktail recipes. 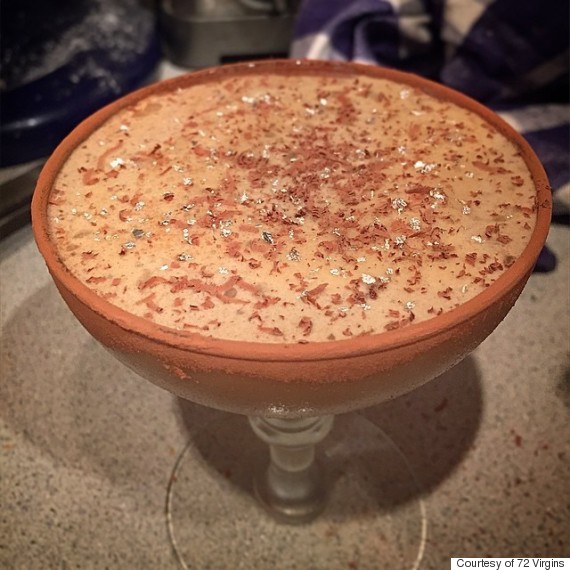 Place coupe glass in the freezer to chill.
Measure and pour all ingredients into cocktail shaker half-full of ice.
Shake for a thirty count (about 30 seconds). Strain into your chilled coupe glass. Use a cocktail strainer and a conical strainer to keep any small pieces of ice or coffee grounds out of the drink.

Express a lemon twist atop flip -- use a vegetable peeler or paring knife to cut away a piece of skin from a lemon. Grabbing the edges with your thumbs and forefingers, squeeze the zest on top of the drink, expressing the volatile oils onto the top of the drink. This imparts an incredible aroma to the nose of your drink.