Your life may have its ups and downs, but Joan Wind's has more -- homegirl can twerk it with the best of them.

The 73-year-old New York City woman was workin' that booty Wednesday as she and 357 other twerkers earned the Guinness World Record for Most People Twerking Simultaneously. She was leaving Macy's, holding several shopping bags, when she she saw the throng of cheeks flapping.

It was her time. 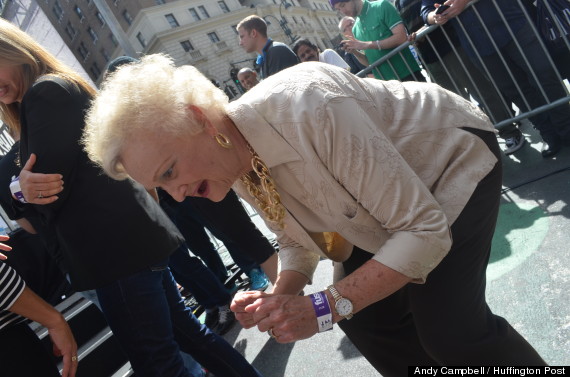 She's more of a hands-on-the-knees technique than an inverted-with-feet-on-the-wall kind of gal. In the video above, she proves that she has a lot better moves than many of her younger counterparts. She said twerking brought her back to the days of the Lindy.

"Two or three years ago I saw it but I didn't think I could do it," Wind told HuffPost Weird News. "Then I tried it at home in the mirror in the bedroom. And I said, 'Oh, it's shaking very good.'"

She said her favorite dance back in the day was the hustle. Now, with her new skills, Wind plans on starting a class for other seniors who want to know how to get down. She was always the type of lady that would "chase after pigeons rather than feed them," she says, and she wants to pass that attitude on to more of her peers.

Joan Wind, 73-Year-Old Twerker, Will Make You Believe In Yourself Again (VIDEO)
A Brief History of Twerking
1 / 32
DJ Jubilee "Do The Jubilee All" (1993)
First thing you need to know about twerking is that it is not new. In fact, it's about as old as Miley herself. The term, which is an amalgam of "twist" and "jerk," emerged from New Orlean's Bounce music scene where the dance was namedropped in songs like "Do The Jubilee All" from 1993. It's widely considered the first recorded reference as Jubilee chants "Twerk baby, twerk baby, twerk, twerk, twerk." Two years later, Cheeky Blakk released the song "Twerk Something," the first with twerk in the title.
YouTube