The Philadelphia 76ers are in the middle of an unprecedented multi-year teardown of their team in the name of future draft picks, high or low.

Got an annoying, expensive player on your team that you want to unload? Send him along with the right draft pick and the 76ers will take on your problem! Need a promising young point guard or an athletic freak of a forward? They can be yours! Just send toss over some of those sweet, sweet draft picks.

It’s a strategy that the team and its general manager, Sam Hinkie, have stuck to without fail ever since he took the reins of the team. Seriously, a guy knit a hat with a tank and a 76ers logo on it; these guys are not messing around.

And that’s what made it so, so weird when, amid the madness that was this year’s NBA trade deadline, Mark Stein of ESPN sent out this tweet:

What?! How could the 76ers have possibly decided it was a good idea to trade for actual, legitimate, real-life, ready-to-go, NBA-caliber player Isaiah Thomas? The guy averaged 20 points per game last year! Why are they not sticking to the plan? Has Hinkie lost his goddamned mind? THIS IS NOT PART OF THE PLAN.

Of course, the team then settled down, remembered they were the 76ers, thought better of it and let Thomas go in favor of, you know, draft picks and “flexibility”:

In all, it was a great day in 76ers tanking history. The team traded away two of its most promising young players, reigning Rookie of the Year Michael Carter-Williams and the athletic freak otherwise known as K.J. McDaniels, and in return received JaVale McGee, Isaiah Canaan and draft picks. A separate Sixerian deal that was never finalized would have sent the Sixers Chase Budinger (who would have been bought out, not played, LOL) as well as, you guessed it, some more draft picks.

But for a moment, let us not talk of such details. It is time to mourn the brief moment on Feb. 19, 2015, when the 76ers almost accidentally obtained an NBA-caliber player. 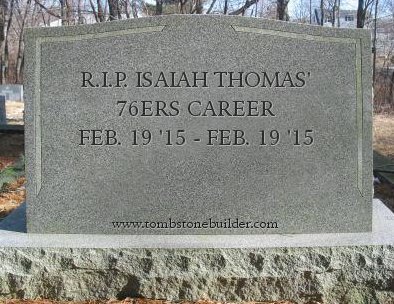