Some artists demand your attention; Brian Eno also wants your patience. The legendary English musician and producer challenges audiences with lengthy ambient compositions and advocates as a board member of the futurist Long Now Foundation. But nowhere is his gradual aesthetic more apparent than in his latest audiovisual piece, "77 Million Paintings," which made its East Coast debut in New York City this past weekend.

The work consists of a central, pinwheel-shaped display with 13 flatscreen monitors that slowly morph from one randomly-generated combination of images to another.

The changes are sometimes barely perceptible, and encourage the sensation of "Hey, when did that part get there?" The effect is disorienting, challenging, and -- after a few minutes of concentration -- beautiful.

A few tree-like columns add natural, slightly spooky element to the space, and several cones and rectangles on the floor and walls frame the central display. The visuals are accompanied by an understated ambient soundtrack, which, like the monitors, manages to span a wider emotional range than might be expected from random permutations.

The space itself contributes profoundly to the piece's power. The cavernous Cafe Rouge, which once housed the Hotel Pennsylvania's restaurant, has previously played host to wild dinner concerts from the likes of Duke Ellington and Glenn Miller. You can feel its Jazz Age ghosts in the elegant, engraved white ceiling, which adds a historical touch to the exhibition's hyper-HD video monitors.

It's only appropriate for Eno's work to inhabit such a haunted environment -- you begin to suspect that time moves at a different pace for him than it does for the rest of us. What we think of as the past might be, for him, just an earlier part of a longer Now.

"77 Million Paintings" runs through June 2 in New York as a part of the Red Bull Music Academy's spring programming series. 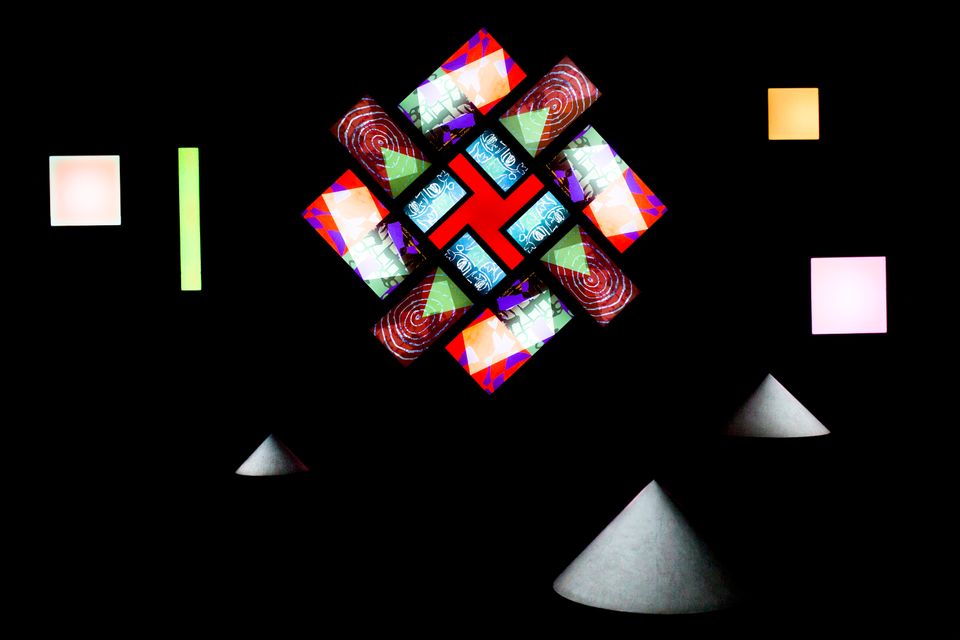