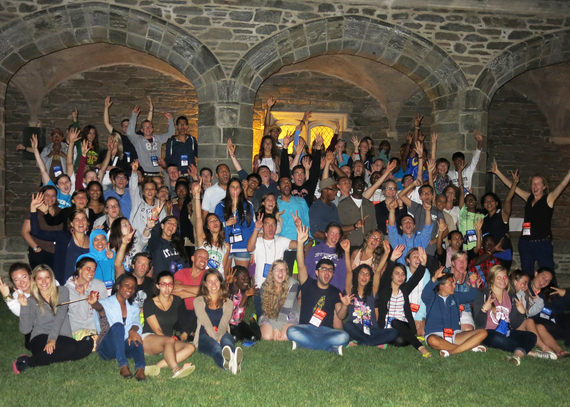 When we see photos in the news of families who are victims of extreme violence or war most of us don't stop to think about the tragic effect on children. Entire families are often adversely affected by the perils of war and violence. Some children lose their parents and other loved ones. How are they then supposed to cope, especially when violence and war are ongoing and/or become lasting traumatic events in their lives?

Tuesday's Children, a nonprofit organization that helps support the healing of children and families of the victims of 9/11, is hosting their 7th annual weeklong PROJECT COMMON BOND (PBC) summer camp next week at Bryn Mawr College in Pennsylvania for children ages 15 - 20. These teens and young adults share the tragedy of having loved ones who lost their lives at the hands of war and extreme violence.

Campers from 20 different countries including Kenya, Israel, Palestine, Algeria, France, Spain, Indonesia, Northern Ireland, Sri Lanka, India, and more will attend PROJECT COMMON BOND this week through July 28. To date, nearly 400 children have participated in PROJECT COMMON BOND like Isaac Othman, 20, from Tulkarem, West Bank. His cousin was killed in Tulkarem in 2002, at the age of 22. Isaac has participated in Seeds of Peace, a similar program in the U.S. which encourages dialogue and peace building between Israelis and Palestinians.

This year's program will welcome back two French participants, Anaele and Adrien Abescat. Anaele is 19 and is from Fayence, France. Her brother, Adrien, 22, has attended PCB many times as a participant and will be returning as a Group Leader this year. They lost their father in a terrorist attack in Saudi Arabia in 2007; both siblings were present during the attack.

All photos courtesy of Tuesday's Children.