This summer has seen a lot of flops on the big screen, but luckily Mother Nature is still directing some of the best shows around. Nothing but water tumbling from a vertical drop, waterfalls have a transcendent beauty that's almost difficult to explain -- there's the rush of the flowing water, the crash falling over the rocks and the residual spray of the cascade.

To help you find an awe-inspiring scene, U.S. News Travel searched far and wide -- from Yosemite National Park to Hamragardar, Iceland -- and found eight of the most impressive waterfalls across the globe. Some are tall, some are wide, some are incredibly strong and some are quaint -- yet all are magnificent. 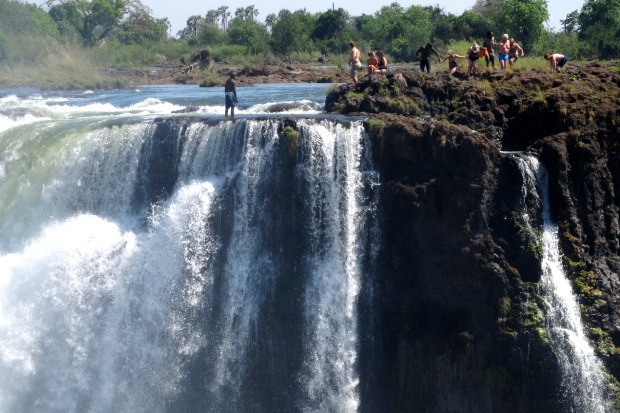 The Victoria Falls (known poetically as Mosi-ao-Tunya or "the Smoke that Thunders") are located at the border of Zambia and Zimbabwe in southern Africa. Reaching about a mile across, the cascading currents drop about 350 feet to the bottom of the Zambezi River where a cloud of mist creates an impenetrable fog. Visit during the wet season (November through March) to experience the highest water volume. To view the powerful falls, you can take a train from Bulawayo, Zimbabwe, or a bus from Windhoek, Namibia. The journey will take the better part of a day, but witnessing the rushing water plummeting to the lower part of the river is nothing short of magical.

Stretching over 1.5 miles from Misiones, Argentina, to Paraná, Brazil, the Iguazú Falls reign as the world's largest, tumbling 269 feet to the Iguazú River floor. Even when the area is experiencing a drought, the steep cliffs -- patch-worked with greenery and draped with skinny ribbons of white water -- are a magnificent sight to behold. Visit between August and November for the best chance to catch a glimpse of the falls gushing with water. You can view them from a number of different vantage points on both the Argentinian and Brazilian sides. One of the most popular ways to witness the roar, spray and beauty of the falls is along the Garganta del Diablo walkway and observation platform, located on the Argentinian side.

The Kaieteur Falls are as amazing to behold as they are difficult to reach. To access the falls -- located within the Kaieteur National Park in South America -- you must hire a pilot to fly you from the capital city of Georgetown, Guyana, to an allocated airstrip. But standing at the top of the falls and looking down at the striking sight of water crashing 741 feet into the Potaro River basin will be worth your journey. And despite the fact that the Kaieteur Falls are one of the world's strongest waterfalls -- gushing an average of 23,400 cubic feet of water per second -- the falls are preserved for their natural beauty, not their power-generating potential.

It's not the tallest, widest or largest waterfall on earth, but you can't deny the beauty of southern Iceland's Seljalandsfoss. Plus, it offers a memorable vantage point: You can walk behind the falls to "ooh" and "ahh" at the loveliness of the Icelandic countryside as you peer through the glittering mist. A single sheet of water pours about 200 feet from a cliff and splashes into a deep pool; make sure to wear waterproof gear as this foss (or waterfall) has been known to drench observers. The easiest way to access Seljalandsfoss is from the southern portion of Ring Road. You'll find Seljalandsfoss roughly 80 miles southeast of Reykjavik.

The Jog Falls in Southern India free fall 830 feet down a steep gorge into the lower part of the Sharavathi River. The currents actually spill down in four distinct falls. The Raja Fall looks like a pillar of white water until it encounters the side-winding Roarer Fall. The Rocket blasts down a number of shoots and the Rani is the gentlest of the four, traveling down in a sheath of foam. An observation platform, located directly opposite the falls, serves as an ideal spot to view this spectacular display. However, keep in mind that a dam manipulates the flow of the falls, so the best time to visit is during monsoon season (roughly June to October) when the water volume is at its highest.

Straddling two countries, Niagara Falls' waterfalls have awed Americans, Canadians and travelers from all over the world for more than a century. These tremendously powerful falls drop more than 3,000 tons of rushing water over the cliff face every second, creating a deafening roar and an endless supply of mist. Niagara Falls is composed of three distinct waterfalls: Ontario's Horseshoe Falls and New York's American and Bridal Veil falls. While Canada is known for hosting the most impressive section of the falls, visitors prefer the American side for its verdant landscape. The U.S. side is also popular for its Hurricane Deck, which overlooks the American Falls and offers spectators ample opportunity to be sloshed by an inescapable spray. If you want to get a close-up look at the falls, hop aboard a Maid of the Mist tour, or enjoy backstage access on a Journey Behind the Falls.

Angel Falls, the world's tallest waterfall at a staggering 3,212 feet, is not named for its proximity to heaven, but rather as a tribute to Jimmie Angel, a 1930s pilot who sought gold and instead found a waterfall. Perpetually shrouded in clouds, Angel Falls' waters drop from Auyán-Tepuí (Devil's Mountain) into the lower Churún River. You'll find the falls situated in the middle of a thick jungle in Venezuela's Canaima National Park. Travelers say the best way to take in the falls is by air, the way Angel first viewed them, though you can also book a river tour.