In 2000, measles was eradicated in the United States, but has recently re-emerged and infected over 100 people in at least 14 states. Many doctors point to parents not vaccinating their children as the reason the virus is now spreading in the United States. Though the vast majority of Americans believe that the benefits of vaccines outweigh the risks, some parents have opted out of vaccinating their children because of personal or religious reasons. Some point to a debunked link to vaccinations causing autism in children, however, earlier this week, the autism advocacy group, Autism Speaks urged parents to have their children vaccinated.

Below are 8 eye-opening facts about vaccines 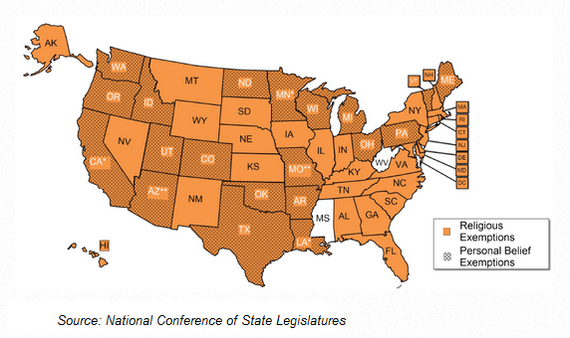 Currently, Mississippi and West Virginia are the only states which do not allow parents to opt out of vaccinating their children because of religious or personal beliefs.

92% of Doctors Say Measles Outbreak Due to Parents Not Vaccinating
Additionally, 79% of doctors believe unvaccinated children shouldn't be allowed in schools.

Tanzania Does Better Than U.S.
As noted by West Virginia Public Broadcasting, many poor countries have much higher vaccination rates than the United States. Tanzania for example, a country ranked 200th out of 228 countries in terms of GDP per capita, has a 99% vaccination rate. Only 91% of Americans have received the measles vaccination.

Younger Americans more skeptical about vaccines
Perhaps it's because millennials have grown up in a world without some of the diseases that previous generations experienced. Regardless, according to a recent YouGov survey, 21% of Americans 18-29 years old believe early childhood vaccinations can cause autism.

133 California School Districts have MMR Vaccination Rates of 80% or Lower
Data from californiakindegartenvaccinations.silk.co
As shown above in this Silk visualization above, according to CDC data, in more than
100 California, 80%
or less have received the measles, mumps and rubella vaccine. Another visualization shows that
22 school districts actually have vaccination rates under 50%
.
Data from californiakindegartenvaccinations.silk.co

Immunization Prevents Between 2-3 Million Deaths Every Year
The World Health Organization (WHO) points out that immunization prevents two to three million deaths each year from diphtheria, tetanus, whooping cough, and measles.

99% Reduction in Bacterial Meningitis Cases
According to the CDC, there has been a 99% reduction bacterial meningitis cases caused by Haemophilus influenzae since the vaccine was introduced in 1988.