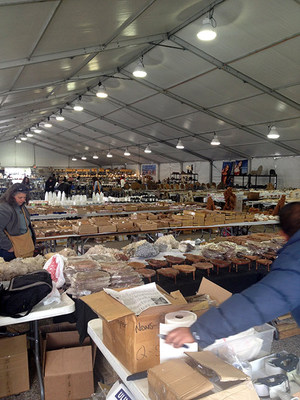 As someone who is passionate about jewelry and gemstones, I was like a kid in a candy store at the Tucson Gem, Mineral and Fossil Showcase. The "Gem Show" features more than 40 sites around Tucson where exhibitors display their wares. There are Miles and miles of tents flocking roadsides where individual gem hunters and collectors display thousands and thousands of stones, fossils and rocks; there were also exhibitors at hotels and convention centers.

Deemed as the world's largest treasure hunt, it was truly a paradise to me. At the end of the day I was overwhelmed and exhausted by all the unique natural elements on display -- from dinosaur fossils and rough, uncut stones to beautifully polished gemstones ready to be turned into beautiful jewelry.

Some of my favorite stones to work with are the uncommon and I enjoy working with raw, polished and cut stones. The hills and mountains around the world are filled with rare and beautiful mineral gemstones, some of which are more rare and valuable than diamonds. Following are 8 gorgeous mineral gemstones you may have never known existed.

Wulfenite is found in bright-oranges and yellows. It crystallizes in a tetragonal system, which means it has 7 lattice points. Wulfenite has been mined in Arizona, Mexico, Austria and Slovenia. The gorgeous orange wulfenite shown here is from the Red Cloud mine in Arizona. 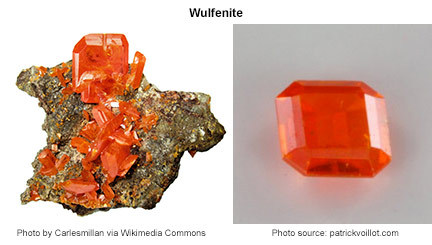 Rhodochrosite is found in shades of pink to pale brown with streaks of white. My team said it reminded them of bacon. Rhodochrosite occurs in a hydrothermal (hot water) vein in low temperature areas such as Romania where it was first discovered as well as Argentina. 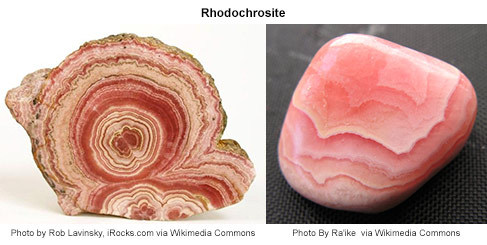 Bixbite is also known as Red Beryl or Red Emerald. It's one of the world's most rare and valuable gemstones and sells for about $10,000 per carat. Red beryl has only been reported from a handful of locations in Utah and New Mexico. The greatest concentration of gem-grade red beryl comes from the Violet Claim in the Wah Wah Mountains of mid-western Utah, discovered in 1958 by Lamar Hodges. 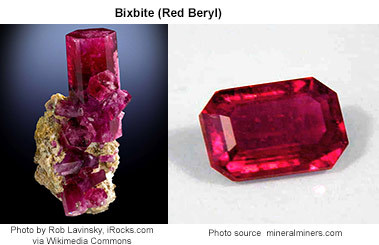 Musgravite was not discovered until 1967 when it was mined in the Musgrave Range of South Australia. Facet grade musgravite was not reported until 1993 and as recently as 2005, there were only eight known specimens. The mineral has since turned up in Greenland, Madagascar, Antarctica, Sri Lanka, and Tanzania. Its rarity puts it among the most expensive stones with prices up to $35,000 per carat. 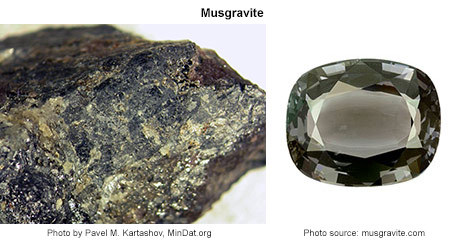 Jeremejevite is a very rare mineral, which can be colorless, yellowish and light blue to slightly purplish blue. It was first discovered in Russia, but the best sources are all located in the Erongo region in Namibia. Prices for this gem are around $2,000 per carat. 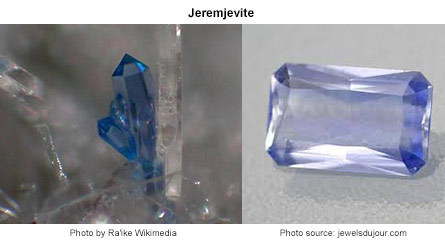 Alexandrite is a rare gemstone, which was discovered in the Ural Mountains in 1834 and named after the Russian tsar Alexander and became the national stone of tsarist Russia. The most fascinating feature of Alexandrite is its ability to change colors. It will exhibit emerald green, red and orange-yellow colors depending on viewing direction in both natural and artificial light. Fine-quality alexandrite has a green to bluish-green color in daylight changing to a red to purplish-red color in incandescent light.

Painite was discovered in 1951 in Mogok, Burma and was once considered the rarest mineral on Earth. For decades, only two crystals were known to exist. In 1957 it was given official gemstone status and in 1979 a third crystal was discovered by the GIA (Gemological Institute of America). At present, more than 1000 crystals have been found primarily in Mynamar. Painite has has an orange-red to brownish-red color, the darker the color the more occlusions. Prices have been quoted at p to $60,000 per carat. 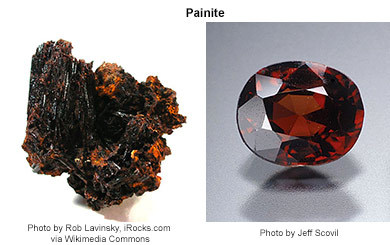 Uvarovite belongs to the garnet group of minerals and is the rarest of these. It was discovered in 1832 and is found in Spain, Russia, Canada, Finland, Norway and South Africa. Uvarovite is a beautiful emerald green drusy. Drusy means that tiny crystals that are deposited on the surface making Uvarovite more fragile than faceted or cabochon gems. One of my favorite one-of-a-kind earrings, designed for my Petra Collection of Fine Jewelry is made from Uvarovite and Diamonds. 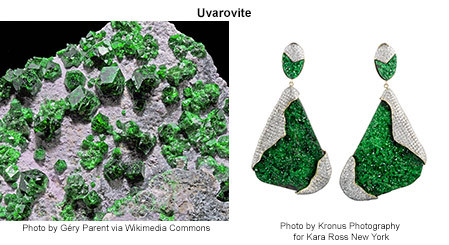