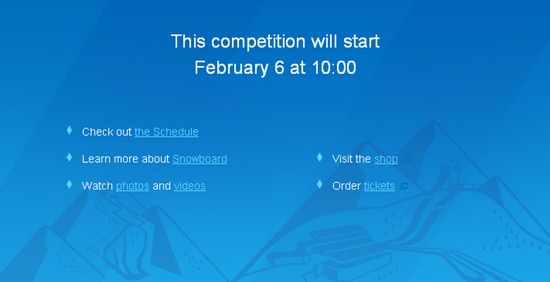 Back in the nineties there was this trend in blogging where niche sites would imitate the websites of major events.

If I could make a site that looked enough like Sochi 2014, then get it tons of traffic right before an event, I could earn referral commissions to hotels or sell Olympic hats on Amazon or even stuffed animals.

Pretty soon, Google stomped out this activity (well, mostly) with authentication methods, but not before a handful of us made what can only be considered ridiculous passive income.

Today, the web is different.

As we look towards the Olympics, however, there's still a lot we can learn from beyond the ceremonies, rings and medals.

1) You have to be BIG to get attention

I'm sure you felt this way -- you create a big project, an epic guide, then someone else one-ups you. Its sad but true: big get noticed, and small is overlooked. Take the new kicker jumps Russian engineers hand-crafted for slopestyle 2014. They're obviously dangerous and are probably getting sculpted down now, but they've already drawn enough media attention to the event that several million people will still watch Sage Kotsenburg try his new grab combos, regardless of the jumps. If you can harness your best talents and create something BIG that people actually need, you'll get the blogging attention you want.

2) International is still so cool

I find the fact that Sochi, the town hosting the games, is a subtropical Russian resort on the Black Sea to be pretty cool. Cooler than hosting the games in Canada (2010) and definitely cooler than hosting them in France (first ever), though to attend the games in 1924 with an iPhone on you would have been a site to remember. Bottom line is, if you've got an international card in your hand, then play in on your blog. Share adventures, often. Post pictures. This makes your life real, and your sales pitches more credible.

If you haven't read the olympic villages sexscapades summary Sam Aplipour published in 2013, grab yourself a hot cocoa and devote 30 minutes to it. Local officials had to airlift in 100,000 condoms so athletes could "do what they had to do" and I guess, for most of them, getting loose helped them relax which led to better performances (on the fields). My roommate used to order Playboys: do what you gotta do. I featured one magazine in my first big blogging guest post: do what you gotta do. Being naughty can definitely be attractive on your blog if you do it carefully.

4) You can always start your own traditions

Like, for example a game surrounding the opening ceremonies. I'll definitely be at one wearing some sort of random colors, how about you? On a blog, starting your own traditions isn't just attractive; it's mandatory. This brings you your community of fans and keep them around, waiting for the next event.

5) The best styles are always changing

So change with them, while keeping your best values. Olypmpians are among the world's most stylish humans, and darn if I'm not pumped to see what new Nike and H&M they're wearing this year so I can go buy the knock-off. Doesn't it always seem like your favorite blogs, from Mashable (tech) to Smart Passive Income (finance) are always getting redesigned? It's annoying, but it's smart business as usual, and they've got the experts and results to prove it. People want clean these days, and simple designs profit. As an avid blogger, I eat this stuff for breakfast, and have been particularly fond of this clever web designer lately because they're actually paying attention to the evolution of style.

"What's one person's good time can be another's nightmare" and Sochi 2014 will be no exception. Aside from tragic injuries which we all hope will be avoided, there's a sea of hackers ready to take your smartphone data lurking in the subtropics and on the hills of Rosa Khutor. The other night, Brian Williams did a segment on the hackers, and the sad takeaway is that your best defense is to delete data or not bring the devices at all! On a blog, same goes, though hopefully less serious. You should always make sure you have secure hosting (read my last HuffPost piece) and a good WordPress back-end to keep your business safe.

And if you can do it like Shaun White does, you'll get attention for it. I guess my best takeaway here is that if you are a well-known name in your blog's niche, don't hesitate to complain a bit sometimes and stir up the pot. Your voice is important so never settle.

8) Even the best are forgotten

At the end of the day, people turn off the televisions and go back to the trials and tribulations of their own lives. The flames die out as your office reopens. Even the gold medal figures skaters are forgotten. However on your blog or website, this doesn't have to be a bad thing. Understanding that you're just one form of entertainment in the sea of lots of others can alleviate some pressure and remind you you've got to keep creating the kind of content people showed up for to begin with.

Laptop and popcorn in hand...
I know several HuffPost readers who'll be blogging throughout the games. Will you? Tell us how. See you down below, and to everyone headed to Sochi, have a safe adventure!