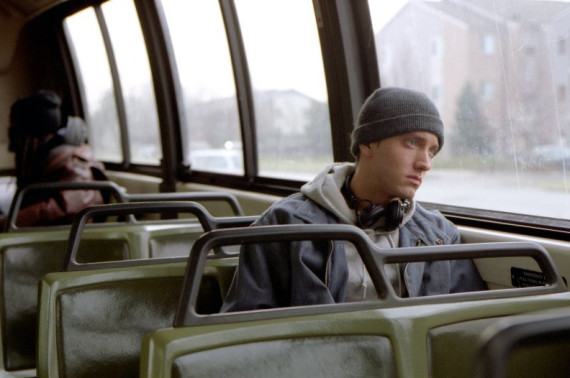 When "8 Mile" was released 10 years ago, on Nov. 9, 2002, Eminem was riding the wave of three mega-successful rap albums. After slashing his way into the public's consciousness with 1999's "Slim Shady LP" (certified four-times platinum), he attained true rock-star status -- and Top 40 radio ubiquity -- with its follow-ups, 2000's "Marshall Mathers LP" (diamond) and 2002's "The Eminem Show" (also diamond).

But he was scary. The albums were laced with malice -- a testament to the American music-listening public's ability to buy into revulsion. His flow, then nasal and hyperactive, laced the usual breathless braggadocio with a lethal cocktail of self-hatred and homicidal menace. There was also his relentlessly cheeky humor, which worked better in some places ("Slim Shady") than others ("Without Me").

The brash Detroit rapper, born Marshall Mathers on October 17, 1972, also happened to be one of the year's biggest movie stars. "8 Mile," a movie about a fictionalized Eminem's rise from Detroit's darkest corners, starred the rapper as himself and banked $51 million during its opening weekend. The film has since earned $242 million in global sales on a scant budget of $41 million.

If that feat -- ruling the box office and the radio while being wholly obscene -- seems small in today's age of Odd Futures and Chief Keefs, keep in mind that Em was not only a grown man (he turned 30 the year of "The Eminem Show" and "8 Mile"), but that he was fantasizing about the murder of his wife and calling his mother a "selfish bitch" who deserved to "burn in hell" (on "Cleaning Out My Closet"). This wasn't Odd Future antagonizing the P.C. crowd by spouting homosexual slurs (though Eminem did that, too) or Chief Keef expressing a youthful disregard for all that's right. This was a man selling millions of records about killing the mother of his daughter -- with the willing assistance of none other than Dr. Dre. (From 1999's "What's the Difference?": "Well if you ever kill that Kim bitch, I'll show you where the ocean is.")

Eminem won an Oscar for Best Original Song and released No. 1 albums while maintaining a level of rage that was -- and perhaps still is -- unparalleled in popular culture. Fast forward 10 years later, and what remains of 2002's Marshall Mathers?

Not much. Over the course of a long decade, Eminem has gone from culture's biggest wildcard to the motivational speaker of the rap game. His latest releases, 2009's "Relapse" and 2010's "Recovery," see a new Marshall Mathers, one who emerged from half a decade of writer's block and prescription pill abuse as a man who was "not afraid to take a stand" and wants to you to hold his hand ("Not Afraid"). His transformation, from a train wreck who scared America into buying his albums by offering up his every disgusting impulse for entertainment to a wise, distant label boss and veteran uninterested in darkness, was complete.

(There's a notable exception in the form of "Love the Way You Lie," a song about domestic violence. But that single was carried by Rihanna -- a pop star. The old Eminem would have enjoyed ridiculing track's sing-songy hook; the new Eminem is featured on Rihanna's upcoming album.)

It's unseemly, of course, to complain too much about Eminem's ascent from talented drug-addled mess to successful family man. But his early work was so visceral (and his recent releases so tepid) that he comes close to proving the notion that the best art comes from pain and chaos. That's an idea reinforced, incidentally, by Angel Haze's recent take on Eminem's 2000 hip-hop confession "Cleaning Out My Closet." In the new version, Haze recounts her experiences with sexual assault with blistering honesty.

So how does this all affect "8 Mile"? The movie is now a snapshot of a lost performer's former life. It wouldn't work if the rapper we now know acted in it, because it's impossible to see today's Eminem in the greasy, visually depressed scenes that dominate the film. It's impossible to imagine today's Eminem hooking up with Brittany Murphy in the back of a factory, or losing it when she sees his mother's house.

Not that we shouldn't have seen this coming: The track that won Eminem his only Oscar was "Lose Yourself," his first true stab at writing something universal, about working hard enough to shed one's current identity. Mission accomplished.