Having trudged through four years of high school English classes, there has unfortunately been only a small smattering of books that have actually inspired me or forced me to consider their meaning. There were the stereotypical required readings such as Romeo and Juliet and The Invisible Man, but while certainly monumental, they did not evoke a sense of amazement and love of literature.

The only books that I have read in high school that left me astonished were Wuthering Heights, Crime and Punishment, To Kill a Mockingbird and Les Miserables. I felt that all the others I had to read were simply in the curriculum to fill the specified quotas (i.e. one book on race, another on religion and several from Shakespeare). Basically, these often abstract books just did not interest me, a regular teenager just trying to get through the maze of high school unscathed.

Today, I am massively enamored with all types of literature, whether they are historical, travel-related, fantasy or romance. I simply cannot imagine a life in which books do not have the ability to transport me to another place and time so that I can live a thousand lives just by picking up bound sheets of paper. Tolkien revealed the land of fantasy, Heart of Darkness pushed me across the edge of sanity and The Prince had me live with cutthroat Florentines. Harry Potter showed me what the thought of magic could do a young girl; I dreamed about a thrilling world living inside my mundane one.

In short, I was more willing to continue consuming the written word when I had to the power to choose what I wanted to read. In school, many students do not take that important initiative themselves and end up disdaining literature because they are forced to read one boring novel after another. I am neither an adult nor a seasoned human being with oodles of life experiences, so that is probably why I (and many other teenagers) do not find the memoirs of Frederick Douglass or Othello particularly riveting.

However, if more exciting and relevant required readings were implemented in school curriculums and extra reading on the side was encouraged more, literacy would jump exponentially. Students just need exposure to that one book, that life-changing novel that contains vitality, life lessons, romance, beautifully crafted language or the thrill of the unfamiliar to become hooked. That is why I believe the Lord of the Rings and Harry Potter series should be required readings in school; they are the modern giants of fantasy writing and already have large cult followings.

Teachers may be weary because these series are too "mainstream" with multiple movies, but I think those details should not be the sole reasons for their lack of visibility in schools. In fact, it is because of their widespread popularity that teachers should jump on the chance for students to read them. Students would be more actively engaged and wouldn't dread coming home to do boring "homework." Instead, they would embark on innumerable journeys at night and come to appreciate the art of storytelling -- priceless traits that can't be picked up on the street or taught in a strict classroom. I am singling out Harry Potter and Lord of the Rings because the two authors, J.K. Rowling and J.R.R. Tolkien, are the reasons I have become such a prolific fiction writer today. With them, the impossible became only a few feet away and alternate universes were constructed with a stroke of the pen. Here are a few more reasons to consider adding HP and LOTR to your child's or student's reading list (and not just for those in high school!) 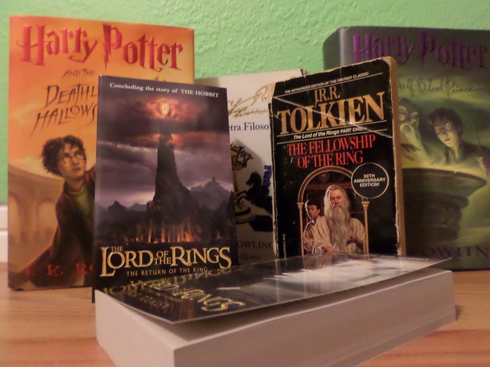 1. Both novels teach the importance of loyalty, friendship and honesty (i.e. the classic trio of Harry, Ron and Hermione and the Fellowship). For example, in chapter 5 of Harry Potter and The Half Blood Prince, "He [Harry] knew that Ron and Hermione were more shocked than they were letting on, but the mere fact that they were still there on either side of him... was worth more than he could ever tell them."

2. Both include advanced vocabulary that would be a boon when students have to take state-administered exams (i.e. I received a 790 on SAT reading because I read like a fiend). Lord of the Rings takes the gold medal in this category for including obscure words such as "malice," "unceasing," and "bestirred."

3. Both are incredible stimulators of imagination for both younger students and self-absorbed high schoolers. The complicated story lines foster critical thinking and analytical skills as well. For example, who doesn't think that "... the trees of Fangorn were awake, and the forest was rising, marching over the hills to war," in chapter 4 is super neat?

4. These books, especially the Harry Potter series, expose readers to complicated characters that change over long periods of time. Catherine and Heathcliff are all very nice and dandy, but the reader is unable to form a long term bond with them since they are only in one concise novel. By contrast, the characters of Snape and Malfoy are so intriguing in that they reveal poignant aspects of human behavior.

5. Both novel series are engaging and introduce students to different, albeit made-up, languages. Elvish or Gobbledegook anyone?

6. The importance of education is stressed in both series, especially in Harry Potter. Despite the increasingly terrible times and almost being slaughtered by Lord Voldemort every year, Harry, Ron and Hermione still continue to value learning. Students these days shouldn't complain about how hard Calculus or English classes are -- at least they aren't being plagued by death eaters and Basilisks.

7. They teach appreciation of traveling and cultural diversity, traits that are important when exposing students to curiosity and innovation. Tolkien is the master of creativity, and the various landscapes he describes are so other-worldly and mesmerizing that I almost believe in their existence. J.K. Rowling also satisfies wanderlust in Harry Potter and the Deathly Hallows. Although camping out in the freezing woods for a year wasn't exactly ideal, the rugged setting was definitely refreshing.

The attitude of apathy towards reading that is spreading through school systems like a virus can be combated several ways. Although Lord of the Rings and Harry Potter are just two suggested series of many, they are the largest and most recognizable titles for students. They will be more enthusiastic to read these books (if they haven't already) because of their adventure, relatable characters and mainstream exposure.

The second way to boost a love of literature is to encourage students to read as much as they can on their own. Most students don't get into Shakespeare, but they may well enjoy historical fiction, medieval tales or even Don Quixote. Advanced literacy is the key to an educated society, and I hear "I don't like reading" too many times in school on a daily basis. Reading is a gateway drug to a whole other universe of possibilities.

Accounting student at the University of Florida