'I'm so tired, I can hardly navigate.'

These words were written by my grandfather, Frank Dexter Merrill, in his diary entry for July 27, 1957.

Within hours, he was dead of a massive heart attack at the age of 79 -- struck down in the very chair in which he was sitting.

Frank was a diarist for the last ten years of his life. He didn't keep a journal; he kept a diary, a daily log. Not too much philosophical or theological reflection in his diaries, except when he was going off on Harry S. Truman. 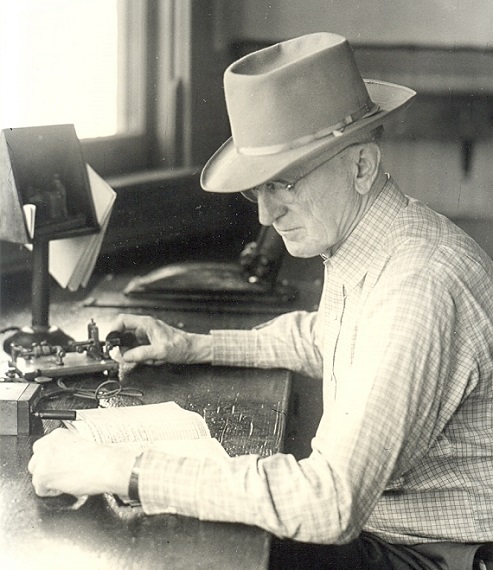 Frank was a railroad man. Here he is at his desk at the depot.

It was truly a daily chronicle. He recorded the time of his rising up and his laying down; his going out and his coming in. The morning temperature was noted, as was what he had for breakfast, who washed the dishes, how many spuds he peeled for supper, the radio programs he heard and the people he saw.

It's a fascinating look into life in the early 1950s, and I based my novel, The Temporary Typist, on his character and the world he describes in the small Iowa town where he lived most of his life. 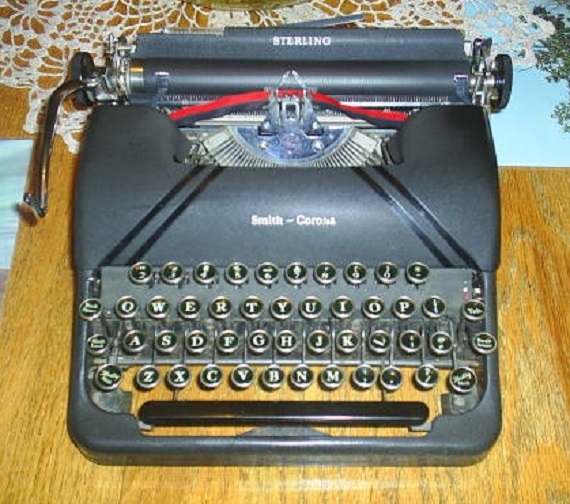 One of the typewriters Frank used.

Oscar Wilde, who arguably possessed the most agile mind of the late 1800s and early 1900s, writes, 'I never travel without my diary. One should always have something sensational to read in the train' (The Importance of Being Earnest).

Frank's life was not sensational, nor is mine. But I, too, keep a diary. The question I am asked most frequently is 'Why?' Of all literary genres, the diary is the least read and most uninteresting, with possible exception of Wilde or Anais Nin. A nutrition label on a loaf of pumpernickel is more exciting. So if no one is going to read your diary -- and really, you don't want them to -- then, why write at all?

I've struggled with that question. Here are some possible answers:

I'm a narcissist. Perhaps I really believe that it's all about me, whatever it's means. Perhaps I keep a diary because I have an inflated opinion of the importance of what I do, and my life as a whole. By writing this stuff down, I feel noteworthy. (I don't really believe this, but, I suppose, it's possible.)

The urge toward immortality. My diaries are a more-or-less permanent record of my life that may survive me beyond the grave for as long as my descendants care to preserve them. Eventually, and inevitably, the last copies (digital or hard copy) of the diaries will disappear, and thus the record, and, eventually, the memory of my life, will vanish as well. There are some of us, myself included, who do not want to be forgotten after death. Why? I don't know. A diary extends my "life" somewhat longer, even if I'm not around to notice.

The self-examined life. Wilde raises the idea of becoming a 'spectator' of one's own life in Dorian Gray. By recording the daily minutiae, I'm able, especially after some time, to glance back at a life as a spectator and observe the action. The mere act of writing about the day's events helps me to evaluate from a slight remove my actions and intentions, and thereby learn from them.

The need for a narrative. The diarist may also enjoy telling stories. The diary is a narrative -- a detailed one, to be sure -- of one's life. A skilled editor or writer could perhaps draft a condensed, rather interesting, drama of the life recorded in a diary. I like telling stories, and, as I write in my diary, I try to focus on encounters and interactions, including updates related to previous dramas.

The great-grandchildren. I wish my great-grandparents had kept a diary. How fascinating it would be to peek into the day-by-day routine of life in the early 1900s! It wouldn't matter to me if my great-grandfather was a horse thief and a moonshiner. I am so far removed from him that, emotionally, I'm not involved. So I keep my diary thinking that at least one of my great- or great-great grandchildren will thank me for doing so.

The Groundhog Day (1993) effect. I journey as a conscious, sentient being through a 16-hour day in real time; then, I write about it, and, thus, experience the day a second time. Then, later, I read what I wrote, and experience the day a third time, and perhaps many times after that.

Record-keeping. A diary has a practical function: it's a record to which I can refer when I forget the name of the hotel we stayed at while in Boston in 2009; or the title of a novel I read. The diary is a sort of family almanac. The front matter of each diary contains a list of all family members and their current age. There's a list of the books I read that year and notes about each title. Appendices include the "family tree" with roots that go deep into the 16th century, birth stories of each of my children, a table of birthdays and deaths of ancestors that reaches back into the early 1800s and a chronological summary of my life (important events, such as graduations, marriage, children, jobs, books published, etc.). Photographs salted throughout the diary connect to an event described in the narrative.

The Pleasure Principle. Bottom line, I keep a diary because I find it to be a pleasurable endeavor. Taking time to write involves a slowing-down of my day. A pipe (or cigar), some scotch or a red wine may be involved. I find that I am smiling as I write about some things that happened during the day. This period of writing -- calming down -- is a healthy thing.

Columnist Herb Caen once said, 'I tend to live in the past because most of my life is there.' Maybe living 'in the past' is helping me stay alive.