Look, I was as excited to send the kiddos back to school as the rest of the parents out there who had a 12-week hiatus from normal daily life. I just wish we could remove a couple irritating back to school elements from the equation (listen to me using words like "equation," I already sound more scholarly... ugh, school is officially in session).

These are a few of the annoying things that come with those darn kids needing an education:

1. School supply shopping. Seriously, if you want to test the boundaries of your patience, spend a day in a crowded discount store ... with your kids and eight bazillion other people trying to vie for the last pack of Crayola Twistables. Don't forget to add in the time it takes for your child to pick the perfect folder or composition book.

My daughter spent 25 minutes deciding whether the folder with the kitten popping out of a birthday present was "better" than the folder with the puppy looking at the kitten with sad eyes while the kitten batted him in the snout. Seriously, neither is going to make you a best-selling child novelist, so just pick one before I stab myself in the eye with this compass!

2. Waking up early sucks. Who doesn't love those extra minutes/hours of sleep in during the summer -- not to mention the stress-free morning routine? There's no mad rush to get to a bus or carpool lane. No one needs to check and make sure work is completed and paperwork is signed to avoid getting docked a letter grade.

Even when the kids are in camp, I have no problem dropping them off late because, well, I know there won't be a pop quiz in archery or dodge ball, and no one is grading their potholder-making skills (except for me, that is).

3. Getting to bed early. Because of the whole waking up early debacle, the kids have to get to sleep at a time that will allow them to be fresh and rested the next morning... apparently, punctuality is important to the school boards. That said, my kids have this amazing ability to get a second wind right when I need them to settle down.

In fact, merely telling them "it's bedtime" is like announcing through a bullhorn that it's time to play with the dog, remember you have unfinished homework, realize something hurts you, that you lost something, decide you didn't have enough for dinner or start to divulge the details about your day, which I inquired about six hours ago with no response.

4. I'm reminded I'm not smarter than a 7th grader... or 4th grader, for that matter. During the summer, I'm incredibly brilliant. I figured out the logistics of carrying four chairs and an umbrella, a cumbersome (but cute) straw bag and two boogie boards from my car to the beach with little assistance. I could tell you the relationship status of anyone who's ever been on The Bachelor with pinpoint accuracy, due to my summer reading, which consisted of anything you could buy in the checkout line at the grocery store. I know, genius, right?

5. Teachers are a judgy bunch. Over the summer I can be a total slacker. No one knows if I've considered swimming the equivalent of bathing for the last week, if my children wore the same clothes for three days straight or if they ate pizza for breakfast, lunch and dinner. But at school, there are these other adults who are watching them... and smelling them... and they are totally aware of such negligence.

Plus, those evil drill sergeants request that I fill out tons of paperwork that I filled out the year before with the same information. I'm also expected to sign and return things -- on time, no less (or they take it out on my children) -- and to make sure my children arrive before the bell rings ... with fresh breath, and full bellies, and finished homework, and signed reading logs, and... It takes a lot of effort and acting ability to seem like all that stuff is done with ease.

6. The only people judgier than teachers are other mothers. I've written about this one before... Those uptight busybodies are aware of everything from my child's last bout of strep to the time I arrive at carpool pick up. What's worse is they make me feel the need to do extra things before attending open houses and PTA meetings... like showering and wearing a bra... and pants.

7. There are NO excuses not to workout. The summer schedule can be pretty erratic -- one day one kid is home, one day it's another, and we do things like find beaches or spend days at pools or go to arcades. These are things that require my attendance, things that take up the time I could use to stay in shape. Now, with my kids gone six hours at a clip, it makes it much harder to find reasons to stay away from the treadmill, the gym or those Insanity videos. This avoidance will induce mountains of guilt.

Maybe I'll put up signs asking solicitors to come to my door, or I'll make appointments at free clinics to ensure I'm in a waiting room for a good portion of the day, or I could always go to the grocery store multiples times daily because I forgot one item (wait, I already do that last one). Darnit, I may have to actually lift a weight or something.

8. Making lunches could be the worst task known to man. I don't know why the task of making lunches is so burdensome. It's not like I don't feed my children on a pretty regular basis, because I do, and I have since, like, forever. But for some reason, there's this pressure to make something that they won't throw away, but that also covers the 4 food groups (or pyramid or isosceles triangle or whatever it is these days). And the worst part -- putting things into Ziploc baggies. Seriously, I can make a sandwich and put it on a plate, but fitting it into that baggy and then zipping it up is sheer torture. 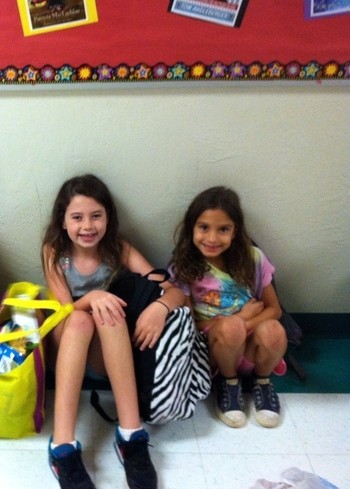 Related:
40 Signs That You're Definitely A Parent
10 Moms You Never Wanna Run Into

Laugh along with Jenny From the Blog on FACEBOOK.