When you think of a small space, you might think of the 500-square-foot tiny homes that have become a popular option for those looking to really downsize. But there are benefits to living in a smaller home -- and you don't have to take your square footage to extremes to enjoy them. Proof: Consider the 1,000-square-foot home. It's smaller than the average house (according to the most recent U.S. Census Bureau data, the average size of a newly built home is 2,657 square feet), but not so small that you need to subscribe to a movement (and buy a Murphy bed!) to live there. 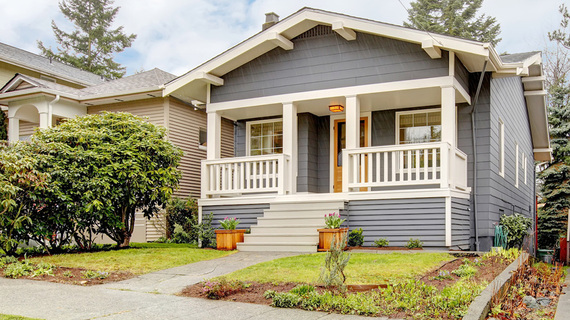 While we're at it, let's rethink the term "downsizing" and all of its negative connotations. "Whether you're an empty nester moving from a house into a condo, or a renter trading in a two-bedroom for a studio and a shorter work commute, many people now see downsizing their home as a step forward, not backward," says New York, NY-based designer Heather Higgins, who frequently handles projects in the 1,000-square-foot area. "Requiring less time, energy, and money, smaller living spaces provide greater lifestyle flexibility."

From real estate in Baltimore, MD, to Jupiter, FL, we spoke with a few homeowners who live the smaller life, along with a few design and real estate experts who can speak firsthand to the other benefits of trading larger living for smaller spaces.

1. Smaller tends to be more affordable

This is one of the biggest motivating factors to make the jump to smaller digs. "My wife and I downsized from a 2,000-square-foot townhouse with a garage to a small 950-square-foot apartment," says Gerald Aguilar of Jupiter, FL, who wanted to save money to help launch his business. He estimates that the move saves him about $400 a month, thanks to cheaper rent and "minuscule" utilities. Which brings us to the next benefit of small-house living ...

2. You save on utilities and other routine

"The cost of insurance, taxes, heating, cooling, electricity, etc. will always be less in a home [that's] 1,000 square feet or less," says Than Merrill, former host of A&E's Flip This House and CEO of FortuneBuilders. While insurance and taxes can also be affected by other factors, utilities are the guaranteed place to save. Merrill says that, on average, the electric bill for a 1,000-square-foot home is approximately $200 per month less than the electric bill for a 3,000-square-foot home. And if you're going the condo route, you can also save big on maintenance fees. "Since most association fees are calculated on square footage, the fewer square feet in a condo, the lower the monthly expense will be for the owner," says Philadelphia, PA, real estate agent Holly Mack-Ward.

3. You can afford to be closer to the action

"In a lot of cities, there's a wealth of homes available in high-demand locations that are under 1,000 square feet -- typically, to get into those 'hot' neighborhoods without getting into really high price points, you're mainly going to be looking at condos or, in historical cities like Philadelphia, Baltimore, and DC, small row homes," says Mack-Ward. "But it's a fair trade-off: When you have a gym two blocks away, you don't need space for a treadmill; when you can stop at the corner market every day on your way home from work, you don't need a massive pantry." And if you're buying a condo, she adds that you'll probably save on homeowner's association fees (since most are calculated based on square footage).

4. Upkeep is a breeze

"Anyone residing in a home over 3,000 square feet can attest to the fact that there always seems to be something going wrong. Whether it's a leak in the guest room or a broken pipe in the upstairs bathroom, the fact is, larger homes require more upkeep," Merrill says. Although few people can truly say they love spending a weekend making repairs, a smaller house potentially means fewer things will go wrong in the first place. Merrill also mentions that even the big-ticket items like replacing a roof, redoing floors, and exterior paint jobs will take a way smaller bite out of your paycheck compared with maintenance on the mansion down the street.

5. It's easier to keep clean

Not only are there fewer rooms to tackle, but also the home's smaller size helps you cut down on collections and clutter. "It really helps one declutter and just keep the real necessary things in life," Gerald Aguilar says. "We also enjoy that there is not much to clean and [it] takes half the time to clean the new space!"

6. You can get creative with upgrades

"It is a plus to be able to splurge on a few pieces you love versus buying to accommodate a large house," says Alex Caratechea, lead designer for Decor Aid. "With a large home, you tend to purchase a lot of off-the-shelf furniture just to fill up the space. With a small home, you have built-in limits [on] buying too much. If you remodel, costs are lower as well." Just think of all the gorgeous wallpapers, luxe countertops, and fine cabinetry you can indulge in.

7. By thinking creatively, you can still host large groups

Writer Jill Weaver frequently hosts parties in her 928-square-foot home near New Haven, CT. While the size of her home can limit the guest list, the home's deck can accommodate larger get-togethers. "It runs the length of the house, and when I have people over, we bring out all the chairs, plus additional folding chairs," she says. "I was never one for formal, large gatherings, so this casual style suits me just fine."

There are times when bigger is better -- but also when bigger just seems overwhelming. Caratechea recalls one client, a family that decided to move to a smaller place in their neighborhood (New York City's Upper East Side). "They lived in a large apartment on Park Avenue and decided to downsize to save money and also to create a more homey feel," he says. "The old apartment was so large and cavernous, and the large rooms felt impersonal and empty." After the makeover, the new space "felt more intimate and more lived-in versus staged."

Do you live in a small(er) house? What are your tips for making the transition? Share in the comments below!