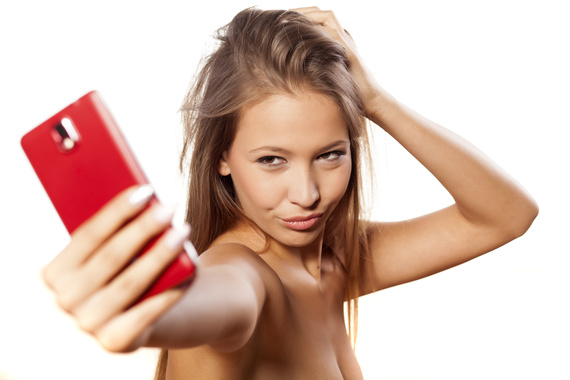 There is nothing necessarily new about sexting. Remember when you could just snap a Polaroid and hand it over? The chances of lots of people seeing the photo were low. Now, within seconds, thousands of people can see your sext (i.e. nude photo) depending on which app or website it gets uploaded to. Stats on the prevalence of sexting among teens range between 9%-60% (1, 2), so who really knows? But in order for us to address sexting in a realistic way with teens, we must first understand the sexual culture they live in that normalizes sexting.

1. Teens think everyone is sexting and it's no big deal. Bottom line, if sexting is the norm in a teen's social circle, they will likely sext (3). And teens who both send and receive sexts tend to be more popular than teens who don't (4). Many of the girls I talk with think if you send a nude photo without your face in it, then there will be no negative outcome. Because sexting occurs so often without consequences like jail or complete social ostracization, when teens hear adults say that these consequences will occur, it makes adults lose credibility.

2. Boys and girls engage in sexting for different reasons. Girls feel pressure to send sexts and are more likely to do so than boys (5). Boys feel more pressure to collect sexts and are more likely to receive sexts and share them with friends or post them online than girls. This poses an issue because it sets up a type of marketplace, where the boys are the consumers and the girls are the products to be consumed. And yes, sometimes boys are senders, but hetero girls are often not into dick pics.

3. The sexual double standard is alive and well in sexting. We think nothing of a boy requesting a nude image or video, but when a girl participates, we think something is wrong with her. Instead of acknowledging that she too, is sexual. Today, girls are expected to refrain from sexual activity, but be extremely sexually attractive and go to extreme lengths to prove it (6). It is not enough to be pure, elegant and ladylike, you also need to be hot and sexually available to men without actually doing the deed. Yeah, not easily achieved.

4. Sexting can be a sign of self-objectification. In the context of a digital world where boys can objectify girls by watching pornography on their mobile phones in class, what is a girl to do? Well, some unconsciously decide "If I can't beat 'em, I can join 'em." Then they begin the process of self-objectification. Self-objectification is the act of treating yourself as an object instead of a subject. Meaning, you break down yourself into physical pieces to scrutinize instead of not worrying about your thighs because they are just as much 'you' as your sense of humor is. Now, there is nothing wrong with enjoying the feeling of 'wantedness' or sexual attractiveness, but the need for it can cross a line. Research shows that self-objectification is linked to decreased sexual esteem, sexual satisfaction, sexual safety, and increased disordered eating, depression and anxiety (7, 8, 9, 10).

5. We have a victim blaming culture, even when it comes to sexting. When I do educational seminars about sex and technology with parents and teachers, I overwhelmingly hear stories of "sexting scandals". Usually followed by a, "Why would she send a nude photo of herself in the first place? Something must be wrong with her." The reason girls sext and post sexy pictures of themselves online is because they do not have as much power to claim sexual entitlement in our culture as men do. They first have to gain approval from men that they are worthy of sex through men acknowledging that they are f**ckable and legitimately hot. So, what do we do? We blame them for playing the game that we do very little to change.

6. We need to redefine female sexual liberation. We have a culture that packages self-objectification as liberation (8, 10). 3rd-wave feminists are typically into self-objectification as "liberating". However, I always tell college students in my seminars, if it is not making more orgasms happen, or sex more pleasurable or naturally occurring in some way, it's probably not liberating. Therefore, it is important to ask teens, what does sexting do for your sex life? This new 'liberating' self-objectification is only the other end of the same spectrum of Victorian-Era chastity, perpetuating an unrealistic standard which women can never truly attain and can only come close to if they have specific physical characteristics. Bottom line, the act of girls and women sending naked pictures of themselves is still centering female sexual expression around men's pleasure and approval. It's difficult for girls to determine if they are actually expressing their sexuality by "being sexual" instead of just putting on a show for boys by "acting sexual" (11).

7. We need to support girls to foster their own talents and abilities in multiple areas of life, and encourage boys to support them too. You don't want your teen to sext? Try telling them not to do it. That didn't work you say? Shocking. It's important for parents of boys to acknowledge the pressure girls feel to prove they are sexy and to encourage them to recognize girls' interests, talents and knowledge above their looks whenever possible. For parents of girls, it's important to focus on their abilities and not just their looks or dress from a young age. It's not that it is bad for teen girls to express sexuality, it's just that we don't want their only dose of daily self-esteem boost to come from a sexy selfie because her sexual worth is her only worth.

8. We need to hold boys and men accountable for their actions, they are capable of not acting on sexual impulses. Parents and schools should be telling boys that asking girls for nude photos is sexual harassment, and that sexual harassment should have consequences under Title IX. Posting and forwarding nude photos or videos is known as revenge porn, and is becoming illegal in many states. This is where our focus should be. Think of how maniacal and vile it is to hurt someone so badly by utterly humiliating them and potentially running future possibilities by posting nude photos online. Compare this with the act of complying with a partner's request to send a nude photo. Whose motivation is unhealthy? The person who sent the photo hoping for a sexual relationship or sexual intimacy? Or the person who posted or forwarded the photo for all to see?

Dr. Megan Maas is a sexuality and technology researcher at Michigan State University. She is an assistant professor in HDFS and a core faculty member in the Research Consortium on Gender Based Violence. She blogs regularly at MeganMaas.com and you can follow her on Twitter @MeganKMaas.