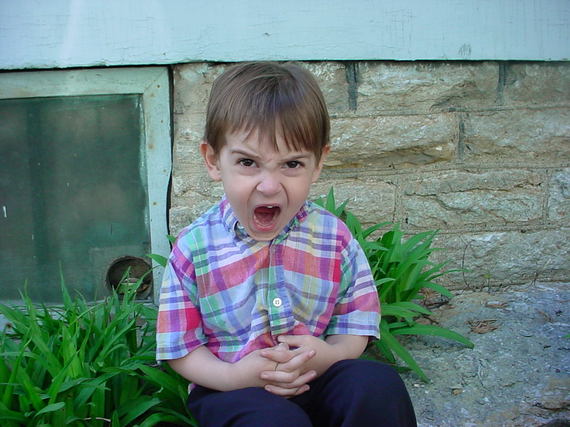 Whoa, wait a minute, did your toddler just drop the F bomb? Does your darling angel sometimes sound like an episode of Real Housewives or Jersey Shore albeit lacking the well placed bleeps? Sure, this type of language from your little one may be a bit shocking, especially considering that he or she still thinks Dora (from Dora the Explorer) can actually hear their helpful chants at the television, but is it a big deal? Instead of getting massively, red-in-the-face upset and carrying out some form of discipline, take a step back and consider why this behavior, while nothing to cheer for and encourage, may be f'ing okay.

As the parent of a toddler who quite casually drops curse words now and again, I can understand why the use of such language might be a source of worry for parents. After all, you don't want your sweetheart wielding such choice terms at the wrong person in the wrong place such as at preschool or in church. However, it is not as big of a deal as you may think. Let me explain why:

1. It isn't hurting you (or anyone else for that matter). The result of a shrieked curse word from your tyke the next time you're grocery shopping or at Mommy and Me class? Embarrassment. You'll survive and so will your child. As a parent, there will be many more embarrassing moments you have to live through over the next 18 years or so.

2. They are mimicking Mom and Dad. In fact, you should take it as a compliment... they really are listening to you! You'll look back on these moments fondly when they are teenagers and pretend like you don't even exist.

3. They need to vent and express emotions just like everyone else. Hell, cussing is better than him or her physically attacking someone... right?

4. All kids curse. As stated in the first paragraph, it isn't something you want to celebrate (no "congrats on your first swear word" cake needed) but it's nothing abnormal.

5. They'll be bored with the curse words pretty quickly. After all, little ones aren't known for their long attention spans. Plus, they very well may be trying to get a rise out of you... you know trying to shock you, and once you aren't shocked they'll move on to other tactics such as dying their hair purple and getting facial piercings.

6. We aren't perfect... so why do you expect your toddler to be? Have you ever slipped up and said a curse word in front of an inappropriate person or at an inappropriate time? For instance, that time you stapled your finger while your boss was at your desk?

7. They are expanding their vocabulary. All toddlers say "ouch" or "oh no." Think of cursing as them merely exercising a little creativity with their words.

8. They'll keep the other kids at bay. After all, who wants to mess with a bad ass toddler? No one will try and take your kid's blocks away! Bonus: The cursing may help you avoid any awkward hang out sessions with other moms (those you'd prefer not to pal around with).

When it comes to your toddler throwing around a few choice words, you can get mad about it or learn to ignore it and accept that your toddler is not *gasp* perfect. So remember the next time your toddler says "Mom, get me some damn goldfish crackers" your response should be "say please" and keep it moving.