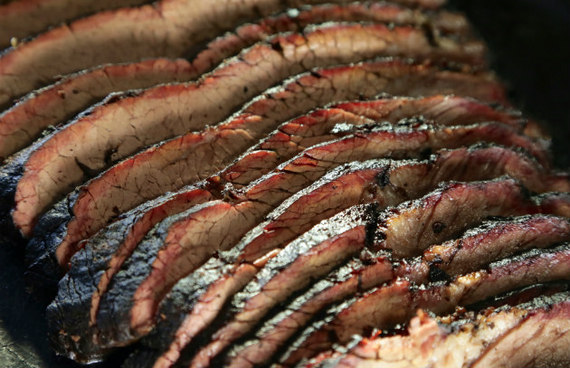 Brisket is the summum of Texas barbecue and its popularity extends far beyond the Lone Star State. Food writers and pit masters like to mystify the process, making smoking a brisket sound as difficult as quantum physics.

Well, I'm going to let you in on a little secret: Brisket is easy, requiring maybe 30 minutes of actual work from start to finish. True, that start to finish can stretch as long as 16 hours. But armed with the right tools (a sharp knife, a remote digital thermometer, and unlined butcher paper) and a little knowledge and patience, anyone can smoke a brisket that would do a barbecue competition proud.

I've cooked a lot of briskets over the years, and two weeks ago, I made what might be the best one of my life. I followed my standard operating procedure--the one you've read in my books--but this brisket knocked it out of the park. So what was different? As I went back through my notes (secret #1: always take notes when you smoke brisket and other meats--record what works and what doesn't), I found I made a few subtle changes to my usual method that took this brisket over the top.

Choose the right meat: I've worked with a lot of briskets, from inexpensive supermarket cuts to exorbitantly-priced Wagyu brisket that costs as much as a simple smoker. This time I used a fresh grass-fed brisket.

Bigger is better: Sure, you can cook a trimmed 6-pound brisket flat (the lean bottom muscle). I used a 12-pound "packer" with the point (the fatty deckle meat) intact. This is a great size: it feeds 10 to 12 people with leftovers and there's enough fat in the point to keep the brisket moist--even during prolonged cooking.

A trim, not a haircut: Using a sharp knife, I trimmed off excess fat (including cutting out the hard, waxy lump of fat between the point and the flat). But I left a finger-thick layer of fat wherever I could to melt and keep the meat basted and moist.

Season like you mean it: After years of using complex rubs, I kept the seasonings simple: coarse sea salt, cracked black peppercorns, and a dusting of hot red pepper flakes for heat. I seasoned the brisket with a heavy hand. I wanted a crust savory with salt and spice.

Use a smoker, not a grill: I smoked this particular brisket on a Weber Smokey Mountain, but in the last few weeks, I've also smoked briskets on a Horizon Marshall (offset barrel smoker) and an awesome Pitmaker BBQ Vault. What's important here is that I used a smoker, not a grill. The WSM and Pitmaker burn charcoal with wood chunks added to generate smoke. The Horizon burns logs.

Smoke with wood: For wood, I used peach chunks. I added a chunk or two every hour--enough to keep thin pale grey-blue smoke rising from the top vents or chimney--not so much to create oily clouds of black smoke, which would have made the meat unpleasantly smoky. I did not soak the wood chunks in water.

Keep it moist: A water smoker like the WSM is defined by its water pan, which I filled as needed to keep the water level at 2 inches. In the Horizon and Pitmaker, I added a foil pan filled with water.

Low and slow, but not too low and slow: I kept the smoker temperature around 250 degrees for most of the cook, bumping it up to 275 the last hour because my dinner guests arrived earlier than expected.

For more tips and a brisket recipe, visit BarbecueBible.com.