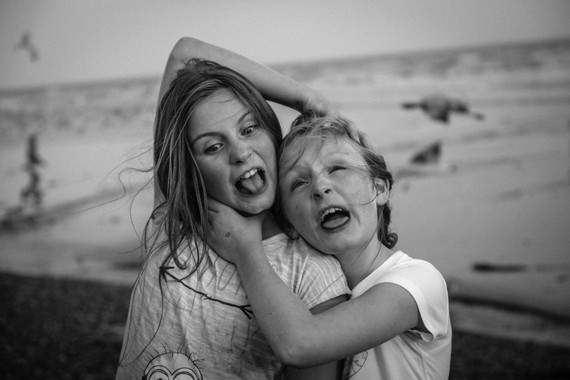 I'm not going to insult parents of young children who say (over and over and over again) that the lack of sleep and the diaper years are difficult -- they can be indeed. And I won't try to convince anyone that toddler tantrums are a joyous experience -- they're absolutely not. But you're not really in the weeds as a parent until your kids are old enough make conscious decisions with "forever" consequences.

While I'm on record as saying "it gets better" as your kids grow up, it also gets more complicated to parent them and to know if you are making the correct-est decisions yourself.

I'm dad to a 12 1/2 and a 9 year old now, two tween girls, and I've been thinking a lot about what's next, as they grow up and go out into a world that isn't always kind to smart, bold, confident, and creative young women.

I don't have all or even a small percentage of the answers or, frankly, the questions themselves, but I know this much: here are 8 things I won't stop doing as a dad of tween daughters.

1. Offering A Kiss At School Drop Off, Pickup, Bedtime, And Throughout Each And Every Day We're Together

Whether they lean in for the kiss is, as it always has been, completely up to them but a peck from dad will remain available for my tween daughters in the school drop off line each morning before we part company for 7.5 hours and again when we're reunited in the mid-afternoon. Same goes for when we wake up, when it's time for bed, and at any point in between. This would also be true if I had sons, of course, because a mutual showing of affection between parent and child is one way each can and should demonstrate love.

2. Saying I Love You

Kissing is one thing that may or may not fade as they get older (only to return in adulthood, as it often does) but the verbal expression of love hopefully will never stop, in either direction. I've heard adults tell stories about their childhood being devoid of the words "I Love You" and that's absolutely heartbreaking. I say "I love you," with sincerity and conviction, at least a handful of times each day, to each of my daughters. Coupled with acts of service, gifts and words of affirmation, I think it is safe to say that the stories my daughters will someday tell of their childhoods will be filled with the word "love," which is EXACTLY how it should be.

3. Advocating For Their Future, Specifically:

4. Involving Them In My Passions... If They Want To Be Involved

Again, this is as it has always been, their choice, but I have no intention of stopping my habit of extending invitations for my daughters to join me at the football match or at the concert or on the hiking/running trail. I've long believed that not only should a parent not give up the hobbies and passions that made them the interesting people they are, but that they should invite their children to experience and participate in those hobbies and passions, whether it's restoring old cars, bowling, running, stamp collecting, European football, Detroit Red Wings hockey, indie rock, painting or whatever. I've done this from the jump and haven't stopped, and my relationship with my daughters is better for it because they have a really great understanding of who their dad is and have learned to take pleasure in seeing me happy, just as their mother and I take great joy in watching them do the things that make them happy. This kind of selflessness in a relationship is paramount.

5. Making Their Breakfast, Their Lunch & Their Dinner

Experts say that kids need to learn how to function in the kitchen and I don't disagree in the least. In fact, I believe that each child should, upon finishing high school, have a personal cookbook of a dozen recipes that they've made and can make again once out on their own. My girls and I bake and cook together, talk about where food comes from, discuss what's real vs. artificial in the grocery store, and occasionally my daughters will make pancakes from scratch or boil water for a bowl of pasta on their own, but I won't stop being the head chef of this house, the one providing my tween (and very soon, teen) daughters with a full breakfast, lunch and snacks at school, and a family dinner at the end of each day, because cooking for them is a way for me to use a lifelong passion of mine to show my daughters how much I care about and love them.

6. Talking About And Offering To Play With Toys, Dolls, And Other "Kid" Things With Them

Too many adults assume their young people have aged out of their favorites from childhood simply because of their age but I know that a 13, 15 and even a 17 year old is still a kid or at least there's a part of them that's still a kid at heart so I won't ever close the door on their childhood. That's up to them to decide, not me. Just this past weekend, my two daughters and their two boy cousins ages 14 and 12, spent hours playing with dolls and a dollhouse at their grandmother's house. When you foster an environment for 'kids to be kids' (in the best sense of that often hideous phrase), they feel safe to be exactly that... and it's a beautiful thing.

I'll never stop challenging my daughters to be better, to try harder, to question everything (even me and my opinions), to think more, and to reflect honestly on their choices, ideas, beliefs, hopes and dreams. A good life is, ultimately, an exhausting one to live because it's damn hard to be an empathetic good person who cares so much about other people, their community, animals and the planet to consider each of their decisions at every turn, but good people are what I'm in the business of raising and so I will not stop challenging them and myself.

They're going to make mistakes and they will experience failure but I know that my girls will be honest with me and their mother, and most importantly, with themselves throughout the journey because of the open, trusting relationship we've fostered and the safe environment we built over the past dozen years. I believe and try to instill in them a belief that they will come out of whatever shade of darkness they might someday find themselves in better off for having dealt with the hardship.

I will never stop telling my tween daughters that I believe them and believe in them, always.