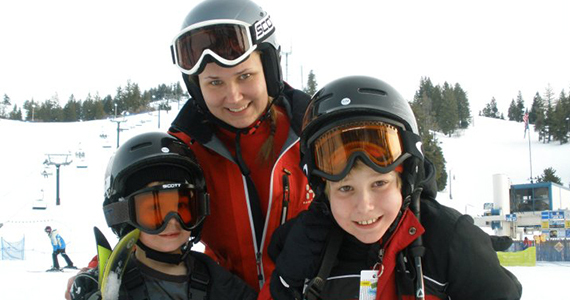 In a few days, we'll be welcoming a teenager into our home. You might think we've gone off the deep end, given that we already have one of our own, as well as a preteen, and shouldn't be so easily duped into taking on another. But hang on, we know what we're doing.

And not second-hand, either. When we told people we were going to host our first foreign exchange student six years ago, we were regaled with not-so-happy stories from former exchange families. It was similar to what happens when an acquaintance finds out you're pregnant and feels compelled to share the most hair-raising details from her own pregnancy, labor and delivery.

But we've yet to experience any downside as a host family, and the student who will soon be moving in will be our fifth.

Of course, just as every child is different, not every hosting experience is the same. But there are a number of important lessons I've learned while playing mom to someone else's child.

1. I've gotten a glimpse into my kids' future and it wasn't (terribly) frightening. Our own boys were young when we started hosting. Our exchange students showed us that teenagers are capable of responsibility, proper grooming, table manners and passing themselves off as real humans in virtually every aspect of life.

2. I've gained perspective on American life. High school in the U.S. is unique. None of our exchange students had heretofore experienced homecoming week or seen a live school marching band. They have been astonished when their peers hired singing telegrams to approach potential prom dates (or that there is such a thing as prom), knew how to expertly fashion togas from bed sheets on demand and would allow their moods to spin on the performance of a football team.

3. I learned how to text. I know, this is so last decade, but I rarely texted before our first student moved in. Now that my own kids have phones which they rarely use for actually talking, I'm glad to have had some time to develop this skill.

4. I've learned how to chill. Having an extra kid around has provided the opportunity to let lessons in coping and the development of resilience happen naturally. I simply can't manage every aspect of everyone's day. Your friend didn't pick you up for school? Now's the time to learn the city bus system. Yay, you.

5. No, I mean I've really learned how to chill. Embarrassingly, I am a different parent when someone else's kid is always around. I've had to learn to take a deep breath when people here push my buttons, moderating my volume level and profanity use lest I scare someone off.

6. I've helped foster world peace, and I didn't have to lead a UN team to some war-torn country, dig wells in Nairobi or administer a polio vaccine in India to do it. Peace is what happens when we walk a mile in someone else's shoes. Each of us, whether host or guest, has had the opportunity to examine ourselves and our way of life through someone else's eyes, and we're better for it.

7. I've put fear in perspective. Foreign exchange students are always on display, sometimes tripping over a non-native language. Kids as young as 15 come to this country with a smattering of English, are immersed in the American high school environment and live with a strange family whose mom may have a proclivity for yelling and swearing. They'll worry (some, exponentially more so than if they were born here) whether people think they're strange, stupid, standoffish or awkward.

You think you have anxiety? That you'll mess up that upcoming presentation? Or the interview you've scheduled this week? Or the meeting where you're to deliver unpleasant news to your boss? Suck it up, cowboy.

What's the worst that can happen? Human spontaneous combustion is super rare. And when is the last time you farted in public? Get out there and test your limits. I know an adolescent or two who do it every day.

8. I've learned the impact of attitude. Of the kids we've hosted, and the others I've met, none had listed our rural state as their preferred destination, or even necessarily knew where we were on a map before coming here. The program we participate in doesn't offer a choice any more specific than the possibility of a range of countries. Embracing the unexpected, and being determined to make the most of any situation, is the entire point.

Even if the unexpected includes learning what "cow tipping" is* or the proper way to bake a russet.

This list could go on, but would get increasingly random, including things like discovering a love of Finnish rye bread, an appreciation for chotskies from around the world, or the discovery of a drawer full of handmade ceramics somebody didn't feel like packing for the trip home.

*And for the record, we've never advocated the "cow tipping" thing. That would be mean.

Beth Markley blogs about parenting and other topics at Manic Mumbling. A version of this post formerly appeared on her blog.