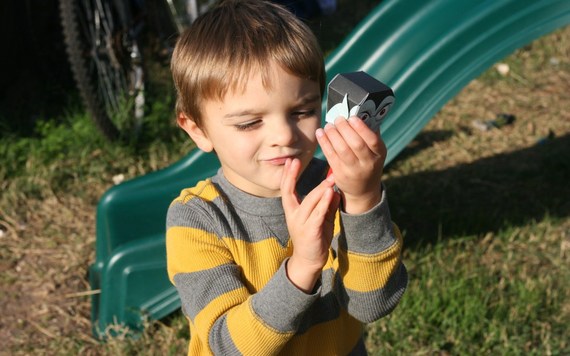 Six boys produce a lot of destruction around my house. Everywhere I look, there are nicks in bookshelves and unintended holes in the walls from errant hands or fingers or just curiosity, and there are cracked toilet lids and picture frames that have no more glass and shattered lights that took an accidental knocking.

But the destruction, by far, hits toys the hardest. Mostly because toys are made of paper. Or something similar. They're surely not made of anything durable, like steel. Or iron. Or cement.

I know, I know. If we had toys made of steel or iron or cement, we'd have bigger things to worry about, and besides, boys wouldn't even be able to lift them, which might be my point.

I have no idea what goes through the minds of toy manufacturers when they're building these complicated little things intended for boy play. I imagine it's something like this: "Haha! Finally! Here is something they'll never be able to destroy."

The answer is always "false."

My boys get pretty wild and rowdy when they're playing, but, from what I've observed, it's not any more wild and rowdy than their friends, including some girls. Kids play hard. It's their favorite thing to do, and that means that many times, the toys they choose to play with consistently are usually always on their last life. Or maybe they never really had a life in the first place, because as soon as they came home and saw the boys, they gave up (remember the scene in Toy Story 4 when Woody and Buzz and Jessie watch the kids at daycare play with the old toys and you can just tell they're terrified to be brought into the room? That's what I imagine any toys coming into our house feel like, if they have feelings.).

So I'm just putting it out there, toy manufacturers: If you want to test whether or not your product is really durable--and I'm talking nothing-is-going-to-destroy-this durable--send it to my house.

Here are some things we've already tried and successfully destroyed:

1. Anything made of foam.

Once upon a time, my second son got a Thor foam hammer for his birthday. It was the coolest thing, if you talked to him. Two days later, it was about half its original size, with tiny little bite marks all over it, because his little brother thought it looked like a good thing to eat. THIS IS THE ONLY THING FOAM IS GOOD FOR.

Trust me. We made light sabers out of pool noodles this summer, because we thought our boys would really enjoy some safe swordplay, except it's hard to sword fight when you're focused on how many bite marks your opponent's lightsaber has. They kept slashing me in the face, because I couldn't stop staring, marveling at how quickly those cool light sabers had deteriorated.

You know those foam protectors they put on the metal bars of trampolines so kids don't get hurt while they're jumping? Yeah, my little foamivores got those, too. Maybe they'll learn their lesson next time a body part connects with a metal pole. But I doubt it. They'd probably think it was fun and try to do it again.

2. Anything made with a thousand pieces that don't keep their pieces.

This would be things like LEGOs that get opened immediately, without any plan, and dumped out. It was a sad awakening when I realized no one really cares about putting together that awesome Star Wars starship as much as I do. This category also hosts things like puzzles, which are all packaged in a bag kids can't open and neither can parents--so when it is finally, finally, finally wrestled open, the pieces go flying everywhere, and at least one of them is sure to disappear. Forever.

(I think toy manufacturers do this on purpose. Someone somewhere is laughing every time a parent sweats through trying to open something and a billion pieces fly everywhere. You know who's not laughing? Me. Thanks for another anxiety attack, toy manufacturers. My kid just tossed a puzzle into my lap and asked me to open it.)

I'll put it back on, and then I'll watch them fill it up with pieces and close it and then open it again, and, whoops, there went the butt flap again and all the pieces are spilling out and my kid is throwing Mr. Potato Head across the room, because it's so frustrating. I know, kids. It's frustrating when you have a leaky butt on your hands. Especially when it's not your own.

These guys. I feel sorry for them. They lose limbs like we lose matching shoes. I've found Captain America with only one arm, but "at least he still has his shield," the boys say. I've found Hulk without a head, which would be a very dangerous Hulk, if you ask me. I've found Iron Man missing a leg, but "at least he can still fly."

All I know is I'm hoping they won't come back to avenge their missing limbs, because I have no idea where they are.

Now, I love playing Apples to Apples and Ticket to Ride and Dominion just like any other parent, and even, when it comes to kids' games, Battleship and Candy Land and Operation. It's just that even though these games are super fun and most of my boys are old enough to play them, they come with two thousand tiny pieces. And they're packaged in boxes.

This alone is a recipe for disaster, but put together, it's a recipe for we'll-never-play-this-again. The boys try to cram on the box lid, even though the Battleship board is still halfway open, and the box tears in half, and then the pieces are everywhere, and we have to break out the Duct tape, and even still, pieces go missing. Ever tried to play Operation without the liver and the heart and the funny bone? It's not as much fun. What's even worse, though, is when parents don't replace the batteries (they never do--but that's an essay for another day).

The 8-year-old once got a microscope for his birthday, because he was really into science (and still is), but it lasted all of three days, because he left it out on the table once and one of his twin brothers decided to see what would happen if he squeezed the tiny little light bulb. Easy enough to fix, except that when he crushed it with his tiny little hands, he also bent a piece that wouldn't permit any other light bulb to be screwed in. (Fun fact: How many people did it take to screw in a light bulb? About twelve, until Husband looked at it and called it what it was: destroyed.)

The 6-year-old once got a really cool bug catcher that broke the first time a fly got caught. (I know. That wasn't his fault.) Another boy once got a frogosphere where you can raise your own frogs, and we didn't even try that one, because we're talking about live animals. After what these boys do to toys? No thanks. You just dodged a bullet, baby frogs.

It's amazing how difficult it is to align the handlebars with the wheels on a scooter when you're putting it together and how amazingly easy it is to mangle this contraption beneath the tires of a minivan when boys forget to put it back where it belongs.

If the 3-year-olds are left alone with a stuffed animal for any amount of time, they will defluff it, which is about as terrible as it sounds. Every now and then they sneak a little stuffy past my eyes and hide it under their pillow until I take a bathroom break from my post right outside their room, which is where I have to stay if there's any chance that they will take a nap, and when I come back, I find miniature throw carpets that have dog heads and lion heads and pink elephant heads with sparkly purple eyes.

In fact, this has happened so often recently I'm considering starting a business selling slippers made from old, defluffed stuffed animals. Because those little throw rugs look suspiciously like the material used for kids slippers. Might as well make a profit off my boys' destruction.

I know it's a daunting task, but judging by the price of that action hero castle they got for Christmas last year that was destroyed two hours later, I'm paying you about twenty-five dollars an hour. You can do this. I know you can.

Plus, my boy just put a cool Star Wars lightsaber on his birthday wish list, and I still remember what happened to the last one. No one wants to see an 8-year-old on a war path to figure out who broke his favorite toy. Trust me.

More:
ParentsParenting raising childrenRaising Boys
Newsletter Sign Up
Raise the kind of person you'd like to know
Subscribe to our parenting newsletter.
Successfully Subscribed!
Realness delivered to your inbox