You can't escape your genes, my dear girl. I was 5'9" by the time I was in fourth grade. Your father tops out at around 6'3". That means you will be very, very tall. Not quite "America's Next Top Model" tall, or WNBA tall. More like "stuck in the back of every class photo" tall, or "can you reach the soup on that top shelf for me, dear?" tall. This will not be the social coup you think; like your parents, you may endure your share of taunts and nastiness, with the promise of someday you'll appreciate being tall to carry you through.

As you continue your upward trajectory, here are a few things you can expect:

1. You will experience a series of minor disappointments.

You will outgrow your tricycle after only riding it once.

You won't be able to go on kiddie rides at the amusement park.

Your gymnastics career will be short-lived.

That purple jacket you loved now ends a full three inches above your wrist.

No one will want to give you piggyback rides.

And I've looked for weeks, but those Dora the Explorer light-up sneakers you covet don't come in your size. Sorry, hon.

Sorry for it all.

2. Everyone will know you're tall.

You're not fooling anyone. You can hunch your shoulders, duck behind people or pull your knees to your chest when you sit. It changes nothing. You just become the "tall girl with the bad posture."

Unlike short girls who can wear heels, there's nothing you can do to adjust your height. I remember it well, and it's hard to embrace something you're still growing into. But if you hulk around like a velociraptor, everyone will think you have spine issues.

3. People will think you have skills you don't possess.

I remember loving the fact that I was picked first for sports teams. To be fair, I had no athletic ability whatsoever (I was the type of kid who would drop a ball and then immediately trip over it). But for that brief moment before anyone actually saw me play, my height convinced people otherwise.

If people who see your your elongated limbs assume you run fast, are graceful or have coordination, don't correct them. By the time they learn the truth, you'll already be the team captain.

4. People will think you are older than you are.

In seventh grade, I played the role of one of the orphans in a school production of Annie. I stomped around ridiculously in my pigtails and overalls, lamenting my "Hard Knock Life," while I looked old enough to be legally emancipated.

As you toddle around in your diaper, carry your stuffed animal everywhere and enjoy the occasional temper tantrum in a mall parking lot, you are unknowingly besieged with confused glances. "She's, um, still wearing diapers?" people ask me pointedly. And when I clue them in that you are only 2 years old, their eyes widen and their jaws drop. "TWO?!!! I thought she was in kindergarten!" After my twentieth "she's tall for her age," people still look at me like I'm trying to sneak a ringer into a peewee game.

But as we discovered when we tried to potty train you at 18 months (terrible idea), just because you look older, does not mean you have to act older. Please keep this in mind when people try to get you to buy beer for them in high school.

Sure, you probably won't be able to establish a sisterhood of traveling pants with your best friends. But when you're sitting across from someone at the lunch table, or jumping together on furniture pretending the floor is lava, you will not notice how tall they are. Not a bit.

My best friend in high school clocked in at barely over five feet tall, a fact I did not realize for three years. We laughed about it once, and it never came up again (until she picked me first for her gym basketball team, which was a huge mistake).

6. Size does matter (in relationships).

My husband sometimes jokes that, as well-matched as we are, I wouldn't have gone out with him if he was short. I laugh, shake my head... and admit he's a teeny bit right. I'm the type of girl who wants to feel small and protected by my partner.

It's inevitable that some men (short and tall) will be intimidated by your height. At some point, you might have a crush on the shortest boy in the grade, and it will be awkward for everyone. Later, you will get annoyed every time you see a tall man dating a short woman (What a waste of inches! Stop dipping into our dating pool!). Eventually, you will have to decide if you can be a Nicole Kidman to someone's Tom Cruise (OK, bad example), or if "tall" is the only drink of water you find refreshing.

7. People will think you're responsible.

When I was 9 years old and at summer camp, the director came by and handed me a stack of forms to pass out to my group. Not only did she think I was a counselor, but she thought I was the counselor in charge! (I proved to be a poor choice: Despite my height, I was preoccupied with getting the last cherry ice pop and forgot the forms on the bus.)

Despite your age, if you're the size of an adult, you will be given the responsibilities of one: leadership roles you never asked for, spearheading group projects, babysitting at way too young an age. Just because you didn't exactly earn this power doesn't mean you can't enjoy it. If I had been more authoritative, I could've walked away with that last cherry ice pop.

8. Everyone will know you're my daughter.

Like two skyscrapers in a small village. Together, we'll have nowhere to go but up. 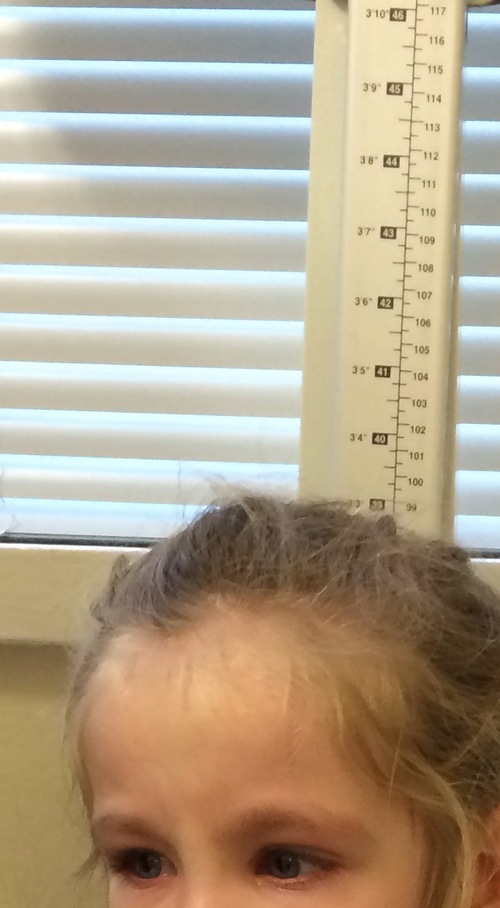