It's hard for parents to understand how a toddler can go from eating everything to barely touching his or her meals. It's even more difficult for them to understand why kids are so reluctant to try new foods. And without a big picture understanding of why kids eat the way they do, parents are left frustrated and are more likely to make feeding mistakes. 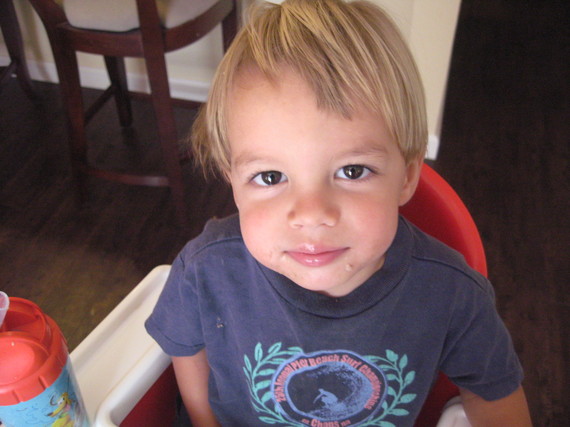 So I talked to some experts, reviewed the research and presented the information from a young child's perspective.

1. I'm not hungry all the time like before. I know everyone wants me to eat but I'm just not that hungry. As a baby I wanted food all the time. But now that I'm a toddler I'm just not into eating as much.

After one year, the rapid growth that occurred will start to slow down. Birth weight triples the first year of life but then doesn't quadruple until the second year. Children between age 2 and puberty gain an average of 4.5 to 6.5 pounds per year. This shows up in their meal patterns which can include days in which they seem disinterested in food. As long as their growth is on track, you can't expect your child to eat the same amounts every day.

2. I'm really afraid. No, really! New foods and certain textures scare me. I'm afraid that something bad will happen if I eat it. I wish my parents wouldn't push it so much. Maybe watching them eat a bunch of times will help me calm down.

"The thinking is that food neophobia, the fear of new foods, has evolved to protect kids as they become more mobile and are able to ingest foods," says Jennifer Orelet Fisher, PhD, Associate Professor at the Department of Public Health at Temple University.

Fisher explains how this developmental phase, which peaks between ages 2 and 6, has evolved from a time where fear of strange foods kept kids from eating harmful toxins. Even though people no longer hunt for food, kids are biologically driven to be skeptical of unfamiliar foods. She says food neophobia will vary in children and often matches temperament. So you might see a cautious kid also cautious about new foods and a more easygoing one less afraid.

3. I want some control. I know my parents did everything for me when I was younger, but I'm older now and want some say in the matter. Plus, food seems to be such a hot button issue!

Picky eating typically starts in toddlerhood, right when kids are beginning to understand they are separate people from their parents. Just as in other areas, they will test their limits during mealtime as they establish a sense of autonomy. This is a very normal part of development.

4. Some flavors are overwhelming. I know my mom wants me to eat broccoli and other green vegetables, but the bitter taste is too much for me to take.

"We all experience different taste worlds," says Alexandra Logue, PhD, Research Professor in The Center for the Advanced Study of Education (CASE) at the Graduate Center of The City University of New York and author of The Psychology of Eating and Drinking. "There's a strong genetic component to taste preferences. It's not kids' or parents' fault." Research suggests that 70 percent of preschoolers taste the bitter compounds found in many vegetables called 6-n-propothiouricil (PROP), which is why young children often shun greens.

5. I like to get the most bang for my buck. There are some foods that are just easier to like -- and fill me up with less effort.

"Children have evolved to like sweet foods," says Fisher. "That's why fruits are highly acceptable and easy to like while vegetables are the least preferred." To kids, sweetness signals a food is "calorie dense," while sourness and bitterness indicate it might be harmful. Although this is true, kids (and adults) can learn to like vegetables through exposure and positive experiences.

6. I have big swings in appetite. It's weird but there are times I just could eat and eat. I get the feeling my parents want me to always eat the same amount, but sometimes my body is telling me it needs more.

While growth rates slow after the first year of life, kids will periodically go through growth spurts where they eat more than they usually do. The two biggest spurts of growth occur during infancy and puberty, but all kids go through periods when they are growing faster and others when they aren't. As long as your child's growth is steady, don't let changes in appetite alarm you.

In Child of Mine: Feeding with Love and Good Sense, Ellyn Satter discusses how kids really do want to eat like their parents, even when it seems otherwise. "Because he thinks that you are great and have all the answers, when he sees you eating green beans he reasons that eating green beans must be the thing to do. You don't have to say another word. All you have to do is enjoy your green beans. Observing that, your child will assume that someday he, too, will eat green beans."

8. I still have a hard time chewing. I cringe when I see meat on my plate. I know I have all my teeth and have been chewing for a while, but I still prefer my meats moist -- and cut up some of the time.

By the time kids reach the preschool age, parents may assume they can chew and swallow like adults, but these skills aren't fully mastered until later childhood. Children can more easily lose track of food in their mouth, are still developing mastication (chewing) and their airway is smaller than adults'. Tough meats and round foods like hot dogs are especially problematic.

The picky eating stage of development is long, but it certainly won't last forever. While no research can point to a certain age when it slows, many of the experts I've spoken with say that by 5 or 6, many kids begin to expand their palates. But how parents handle this lengthy stage of development can make a big difference in how well children accept food over time.

For more about picky eating, and evidenced-based strategies that help, check out my new e-book From Picky to Powerful: Transform Your Outlook on Picky Eating and End Food Battles Forever.