With the new year come the lists telling us where Americans will be heading in 2015. And they typically include somewhere in Mexico, whether its Cancún, Cabo, or the Riviera Maya.

But Mexico is also home to one of the planet's great urban travel destinations -- a city with unmatched cultural attractions and a world-renowned gastronomy scene. We're talking about Mexico City, and it's likely that most of what you think you know about it is wrong.

In actuality, crime is down, the air is clean, and the look has been all jazzed up. The historic center along with other inviting neighborhoods have benefited from major capital improvements. This is a pedestrian-friendly city with an extensive Metro (subway) system that's safe and accessible. There's also a big movement to green the city that includes a popular, free bikeshare program. Chapultepec Park, Mexico City's Central Park, and the city's main drag, Paseo de la Reforma, are closed to traffic on the weekend to make way for cyclists, of which there are many of all ages. The city is leafy, inviting and buzzing with energy. Mexico City has come into its own.

While this city of 30 million seems to have almost as many neighborhoods as it does residents, most visitors will keep themselves to the glamorous environs of Polanco, Roma, Condessa, the Historic Center and Coyoacan. In posh Polanco bordering Chapultepec Park, you'll find Mexico's answer to Rodeo Drive, Avenida Presidente Masaryk, and the stylish El Presidente Intercontinental hotel. Hipsters and fashionistas call Roma Norte and Condessa home, buzzing as it is with smart restaurants, cafes and shops. The historic center is, well, the historic center, dating to colonial times (and before) with the major sites that everyone associates with Mexico City. Coyoacan, south of the main center, was the original settlement for the conquistadores, now an enclave of artists and writers (Frida and Diego lived here) and it exudes colonial charm.

Historic Center & Zocalo The zocalo has been the center of Mexico City even before the Spanish arrived. Calling it a town square would be like calling Times Square a wide spot in the road. A vast plaza flanked by the Cathedral of Mexico City, the national palace and colonial arcade, the zocalo ranks alongside Moscow's Red Square and Beijing's Tienanmen Square as one of the world's largest city squares.

In front of the grand edifice of the 16th century Metropolitan Cathedral of Mexico City, Indian dancers in feathered headdresses evoke Mexico's Aztec past. A riot of vendors sell shawls, knitted sweaters, Toltec masks, pottery, beaded jewelry, (alleged) silver and turquoise, carved figures in obsidian and stone and all manner of trinkets.

The conquistadors built the cathedral from the spoils of the Templo Mayor, where Moctezuma the Aztec king ruled the pre-Columbian roost. The temple ruins were unearthed during subway construction in the 1970s, and are now preserved for all to see. If you like old stones with your lunch, El Mayor restaurant perches above the site, offering an amazing view of the Templo Mayor archaeological site.

The Calle Madero pedestrian thoroughfare connects the zocalo and the Palacio des Bellas Artes. Along the way, duck into the Banco Nacional de Mexico with an exhibit of paintings they've amassed over the centuries. You may want to skip the portraits of stuffy aristocrats arrayed at the front and go right for the gold: Diego Riveras, Tamayos, Orozcos and O'Gormans.

Palacio des Bellas Artes This lavish Beaux Arts confection, its exterior lit in lilac and pink, is home to a famed Diego Rivera, El Hombre en el Cruce de Caminos (Man at the Crossroads), originally commissioned for New York's Rockefeller Center. The Rockefellers had the original destroyed because of its anti-capitalist themes, but Rivera recreated it here in 1934.

Chapultepec Castle Amid the greenery of Bosque de Chapultepec, Mexico's Central Park, rises one of the city's gems, the Castillo de Chapultec. This is where presidents and emperors lived with pretensions of the French and Spanish courts. Sweeping marble staircases, gilded rooms, bejeweled personal effects, Versailles-like carriages and sprawling terraces with views all around speak to the ostentatious lifestyle that helped spark a peasant revolution.

Anthropological Museum The National Museum of Anthropology is one of the world's great museums, housing the most significant collection of pre-Hispanic artifacts to be found anywhere. Sculptures, stellae and frescoes of Aztec, Toltec, Olmec and Maya artists crackle with a vital energy. It's chilling to be in their presence. The singular vision of these lost civilizations, a panoply of plumed serpents, shamans and skulls, has inspired artists ancient and modern. The Aztec sun disk, the museum's breathtaking centerpiece, served as a gladiator's ring and sacrificial altar in the Templo Mayor, the palace of the Aztec ruler that stood at the center of Mexico City.

Frida Kahlo Museum The blue house where Frida and Diego lived in the charming Coyoacan district is a piece of political as well as art history. Leon Trotsky took refuge here when he fled the Soviet dictatorship. A permanent collection of Frida Kahlo and Diego Rivera paintings can be seen here -- and nowhere else: the artists stipulated they would never leave the premises. Some would consider this reason enough for a trip to Mexico City. But there's more -- her signature outfits, jewelry, photos and his amazing collection of pre-Columbian sculpture, the very beds they slept in and the household artifacts and décor preserved intact as though they still lived here. Arrive early to avoid the crowds, especially on weekends.

Diego Rivera Studio Just up the road from the blue house, the studios of Diego and Frida share a modernist three-story structure linked by a roof bridge. Brushes, jars of pigments, and the skeletons and demonic figures that served as his muse fill the sun-drenched studio; it's as if the artist just stepped out for a moment. A big-eyed portrait of Dolores Del Rio stands on an easel. In a room off the studio, zippered leather shoes sit on the floor next to his bed, a pistol on the nightstand, a blue denim shirt with red and white handkerchief hanging nearby.

There's culinary magic in Mexico with an explosion of creative chefs adding imaginative touches to the traditional kitchen. It's not surprising Mexico is a foodie destination. Whether you stop at a taqueria on the street or dine at one of the marquee new hot spots, your palate will be delighted.

Guzina Oaxaca Chef Alejandro Ruiz recently opened this Mexico City branch of his famed Oaxaca eatery in the upscale Polanca neighborhood. We found mole in multiple incarnations, all remarkable, on this imaginative menu -- enchiladas in a reddish-brown colorado mole, short ribs or turkey in a black mole with a slightly bitter tinge, and a green mole based on pumpkin seeds.

Nicos This traditional, family-run restaurant in the Colonia Claveria neighborhood has been around since 1957 and still has the magic, and that old-fashioned feeling you can love. You'll see smartly dressed women and mustachioed men in suits donning aprons to tuck into their lunch of exquisite mole (black or green), chicken with avocado leaf and pulque, or rabbit prepared with chileajo. Don't miss the rich Oaxacan chocolate and coffee mousse.

Contramar Not only is this the place to see and be seen in the fashionable Roma district, the food is a knockout. As you feast on tuna tostadas, carnitas de pescado and other seafood creations for which this place is famed, the crowd is as dazzling as the food. Score a coveted outside table on this leafy residential street and enjoy the scene.

Tostados Coyoacan You don't feel like you're really in Mexico until you're eating at one of the food stands you find everywhere -- at markets, by the roadside and on street corners. These are the original pop-up restaurants, and the food beats many white table-cloth outposts. Tostadas Coyoacan, in the Coyoacan market just steps from the Frida Kahlo Museum, offers crunchy fried tortillas piled high with a galaxy of choice toppings, from the ubiquitous beef, chicken & pork, to the exotic ceviche, fish and octopus.

Pyramids On the outskirts of Mexico's sprawl, thirty miles from the city center, lies the incomparable archaeological zone of Teotihuacan with the largest pyramids this side of the Valley Nile. The Temple of the Sun, the Temple of the Moon and the Palace of Quetzacoatl anchor a spectacular vista only fully appreciated from the summits of these marquee monuments. From atop the Temple of the Moon, you see low ziggurats of volcanic stone flanking a broad promenade that stretches to the Sun Temple, where a steady stream of climbers ascends its stepped face like a line of ants. 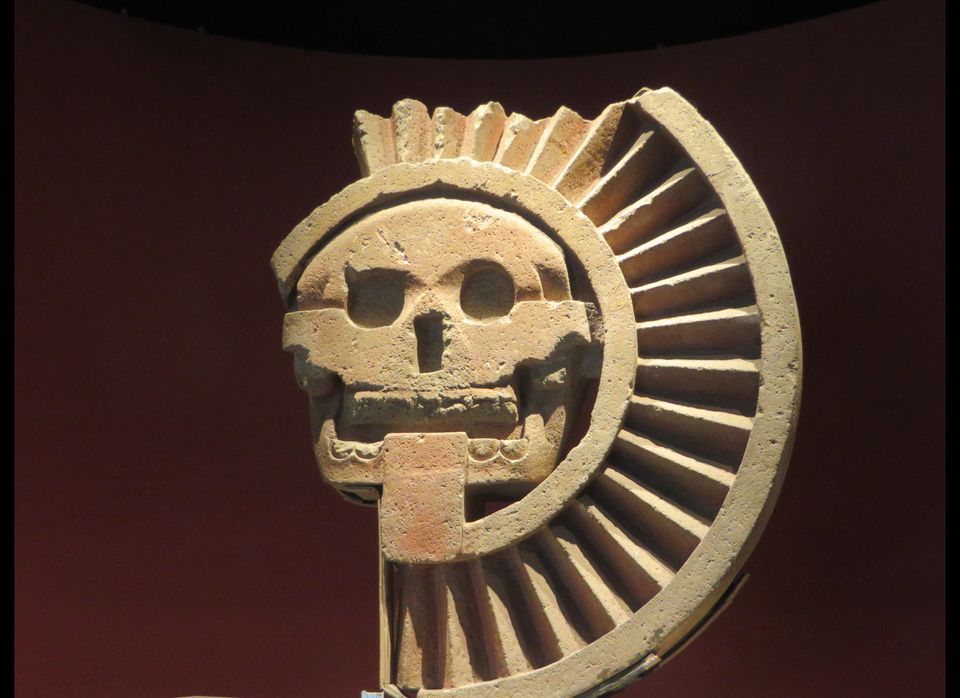 Aztecs big on skulls, as you'll see at the unparalleled National Museum of Archaeology
Sun Disk 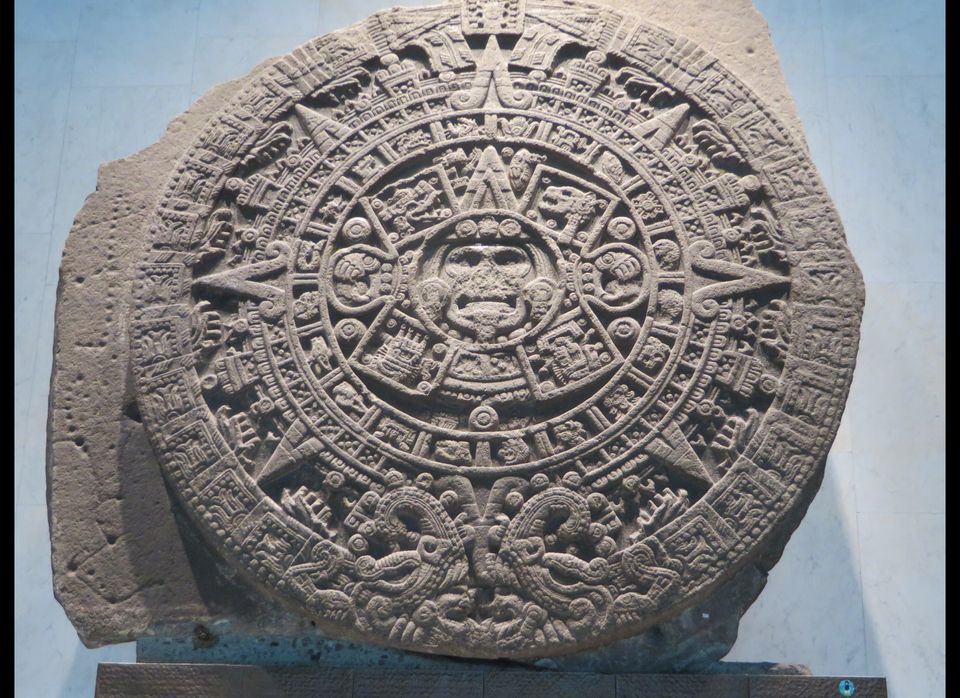 The centerpiece of the unparalleled National Museum of Archaeology
Aztec Goth 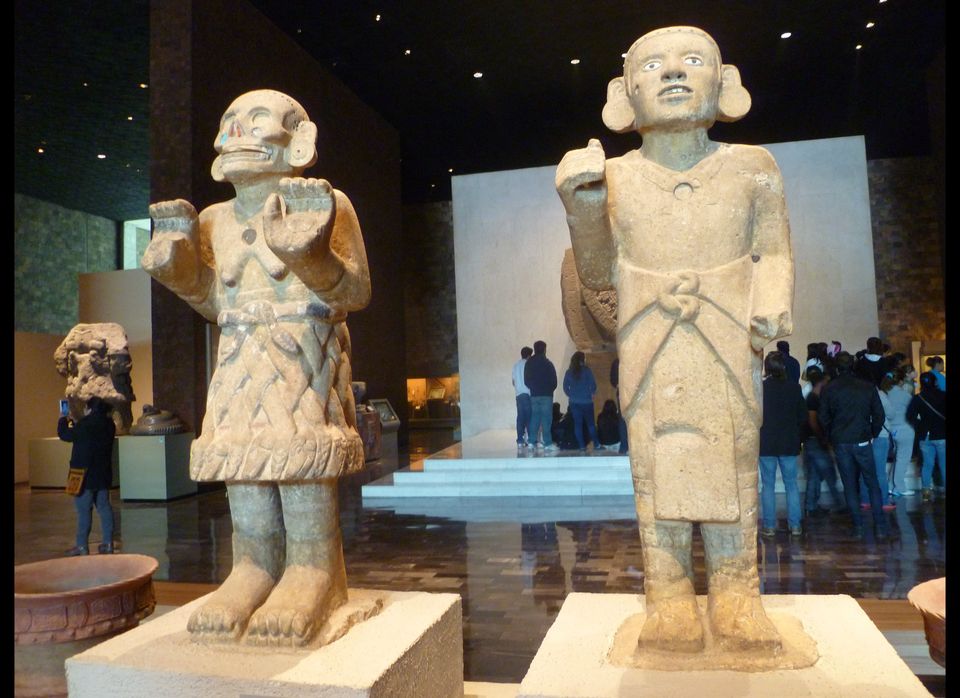 At the unparalleled National Museum of Archaeology
Frida and Uncle Joe 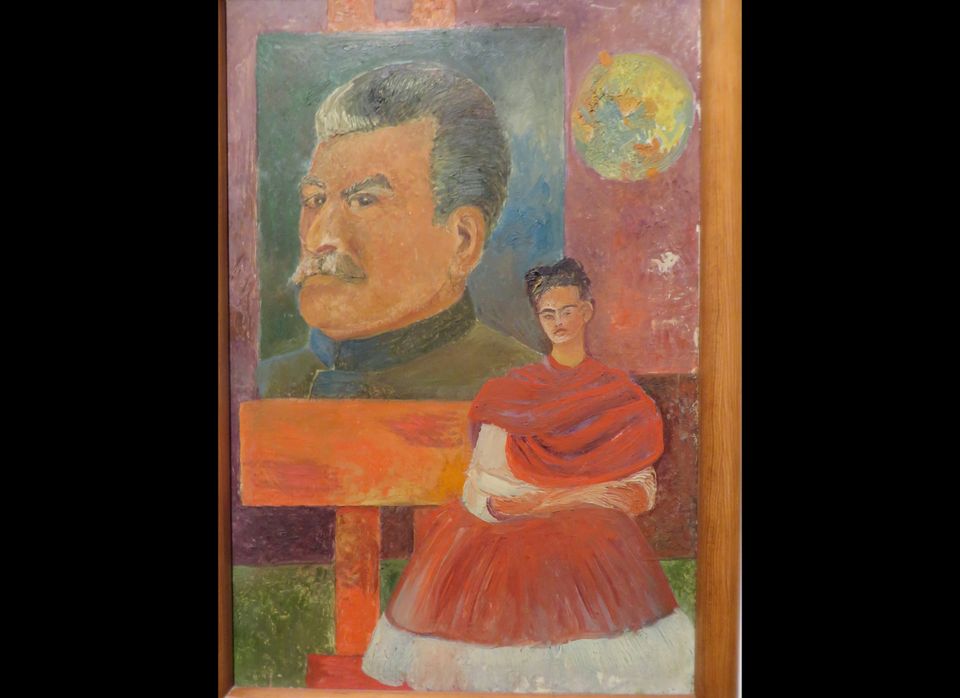 A Frida Kahlo you can see only at the Frida Kahlo Museum in Coyoacan, Mexico City
Family portrait 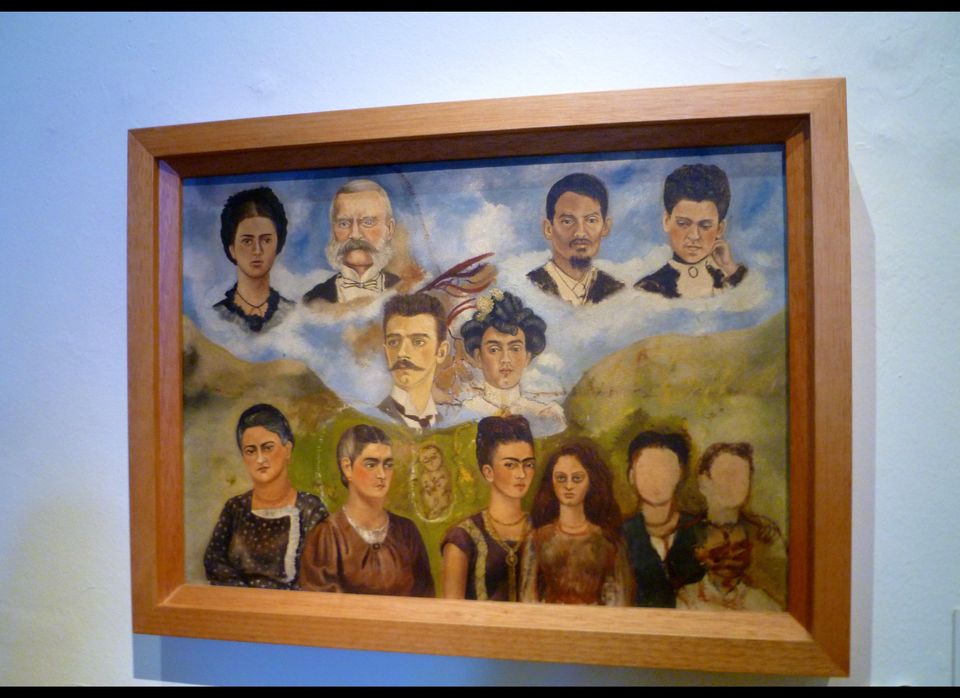 At the Frida Kahlo Museum
Frida, Karl and Uncle Sam 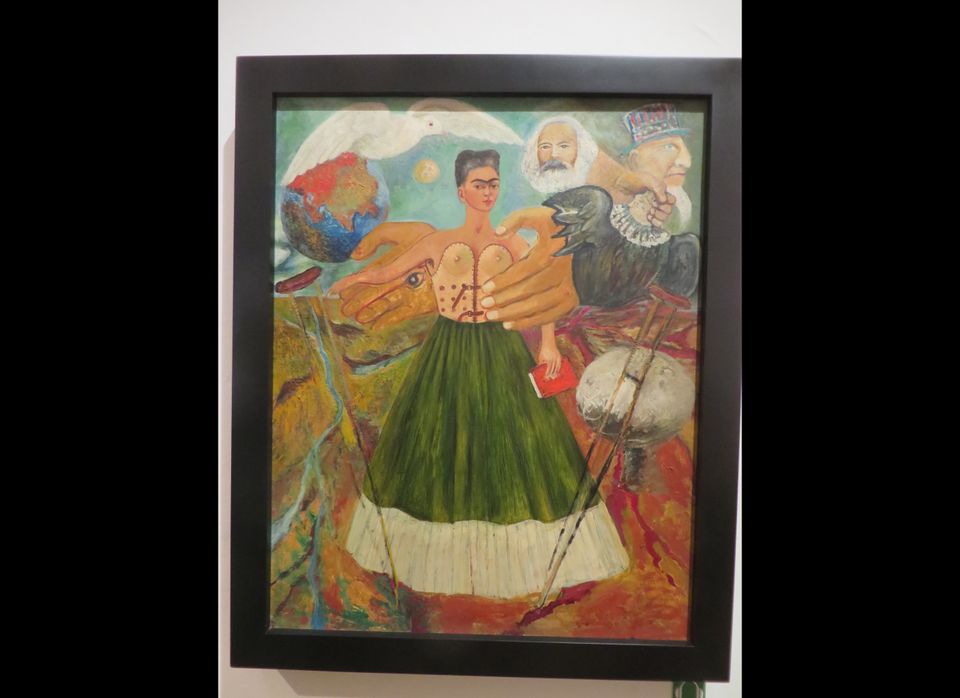 At the Frida Kahlo Museum
Move over, Lady Gaga 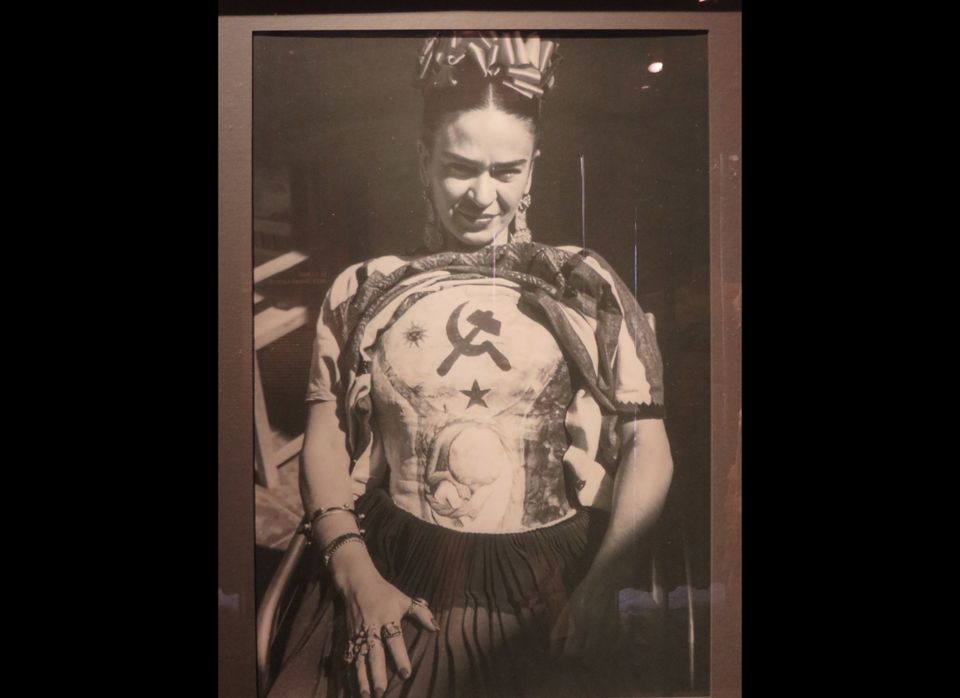 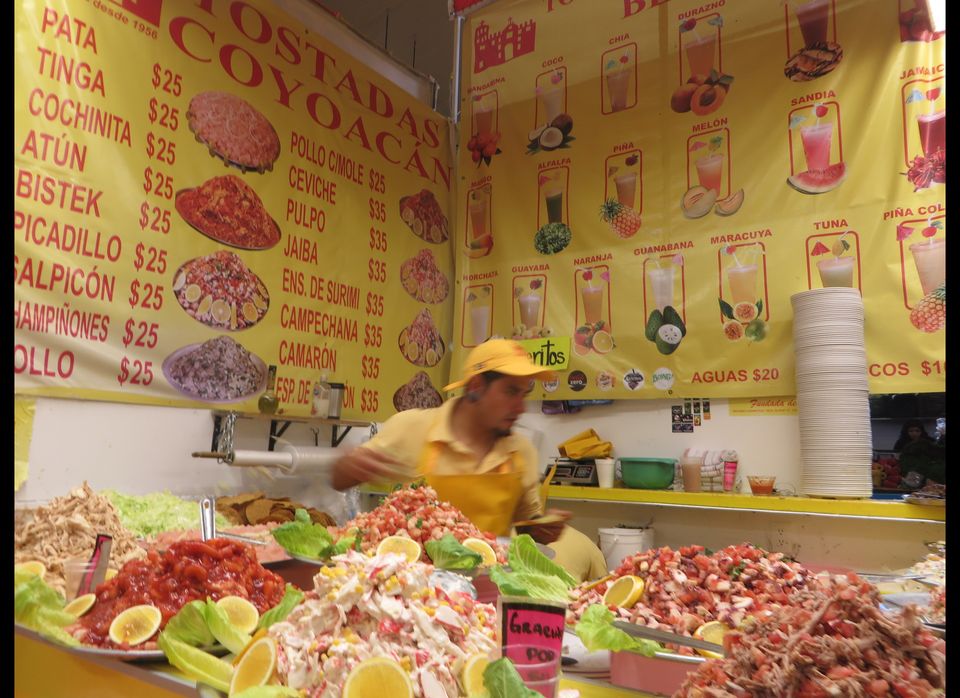 Great eats down the street from the Frida Kahlo Museum
Tuna Tostada, Contramar 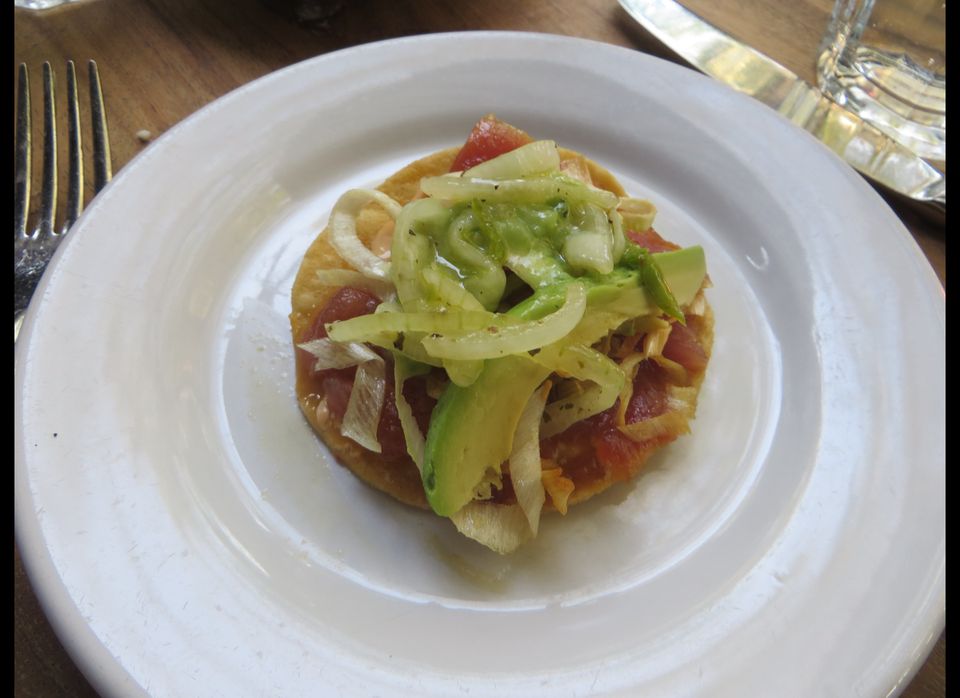 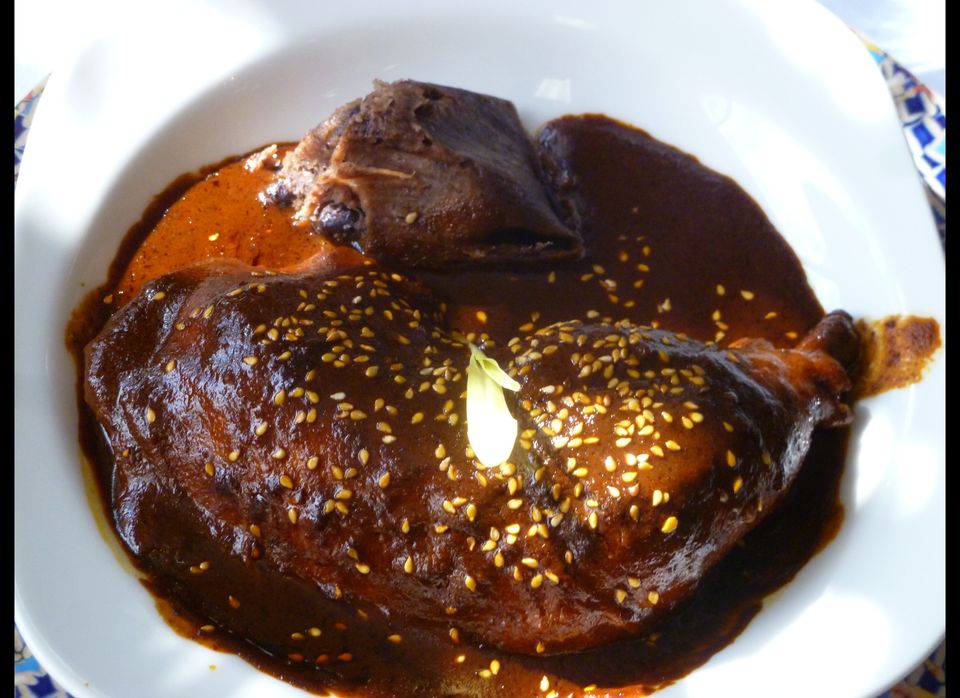 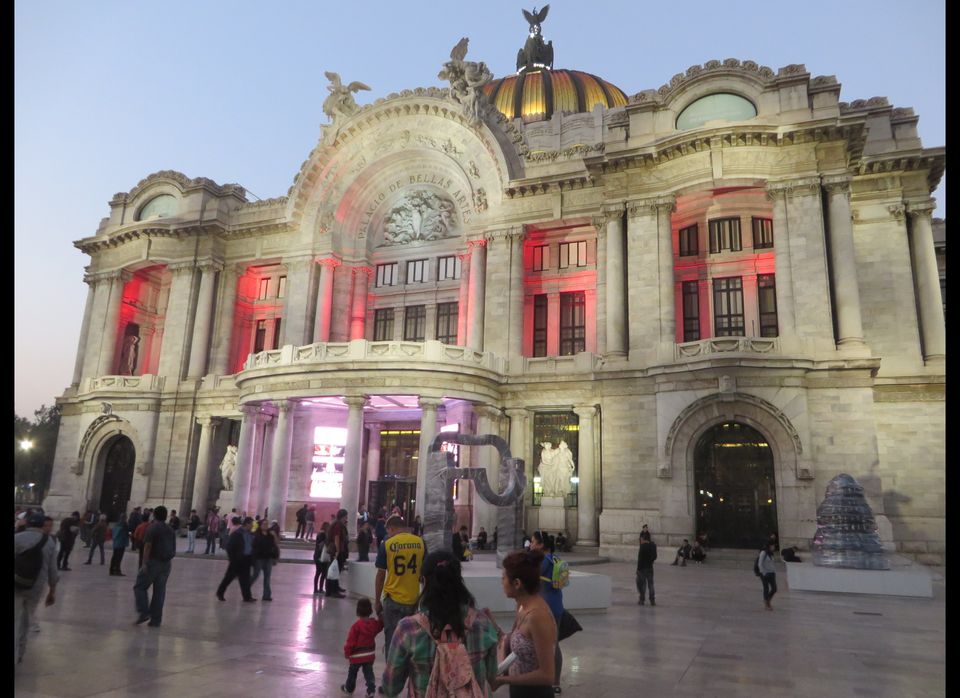 Don't miss the Diego Rivera inside
Dancers at Zocalo 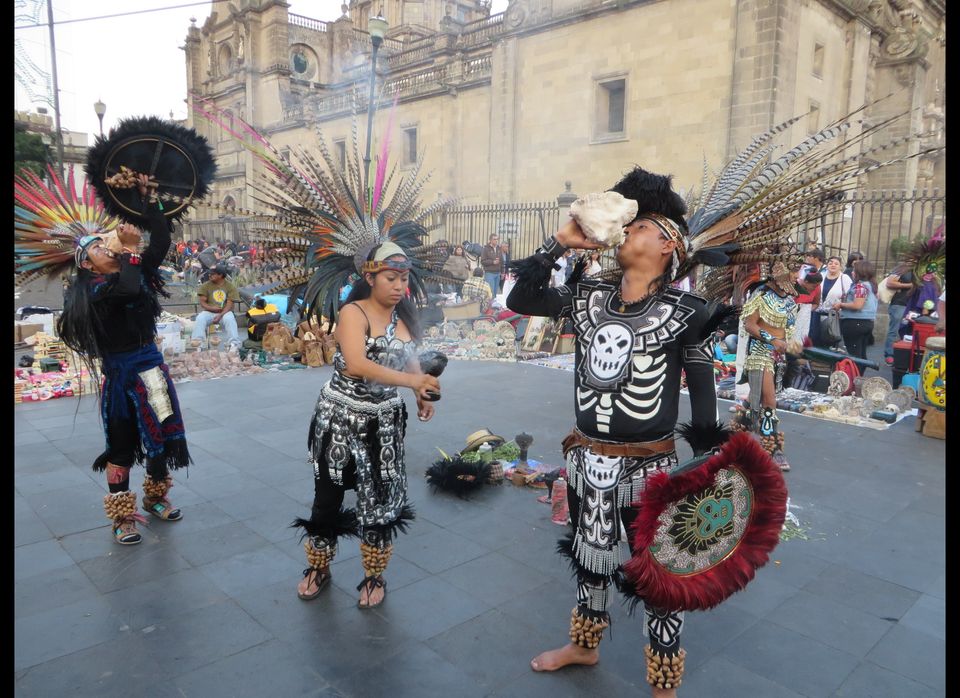 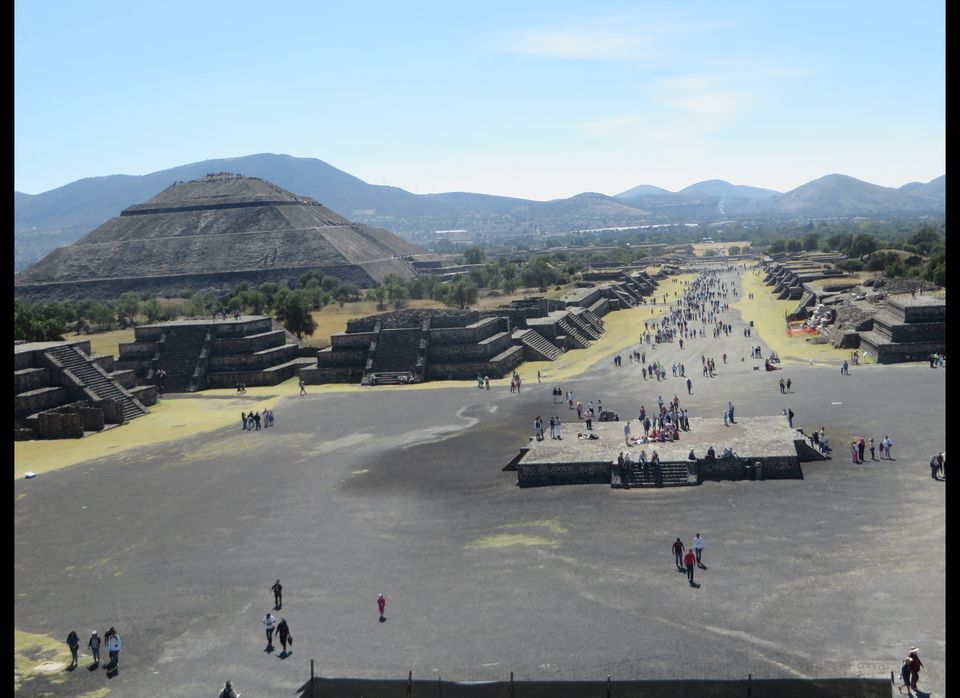 From atop the Temple of the Moon at Teotihuacan, outside Mexico City
More:
mexico cityMexicoTravel BlogsslidepollajaxFood