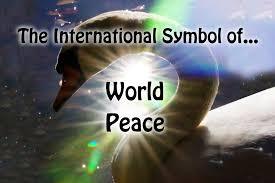 There are three species of swans in North America: - the mute swan, the trumpeter swan (found mostly in Canada and the northern tier of the U.S.) and the tundra swan (which nests in the Arctic and migrates south). All are large white swans but the trumpeter is North America's largest waterfowl.

1. Swans recognize people. Two trumpeter swans at a nearby lake, for example, elicit those heavenly trumpet-like sounds - and in unison -- toward people they know. They always trumpet together as soon as I arrive; an unofficial welcoming committee. And it has nothing to do with food. I give them bits of wheat bread by hand but they seem to prefer their underwater vegetation so there's definitely a mutual admiration society here.

2. Swans get along famously with other species. The two trumpeter swans mentioned were brought to a lake in central Alabama to keep the Canada geese away. The plan backfired. Swans and geese co-exist nicely, and it is not unusual to see them swimming together - along with turtles, beavers and mallard and muskovy ducks. Last year, a pair of free-roaming mute swans stopped off at another lake where I was feeding some muskovy ducks. I saw them circling the lake for about five minutes before landing. I gave them some corn, which they seemed happy to get. The swans got along with the geese and ducks there. The swans stayed a few days and then left. I've not seen them since.

3. People give swans a wide berth, probably because of their size. They are treated with a respect not accorded Canada geese and ducks, who are frequently harassed by dogs and children. However, I've yet to see humans or dogs harass or bother a swan.

4. Swans add synergy and grace to their surroundings; offering temporary relief from a world gone mad. Their presence also reminds us that there is life beyond technology.

5. Swans are not aggressive.

"They're defensive," says Sheila Bolin, an international swan expert . "They protect their nests and young just as an alligator or other species would but they're not (by nature) aggressive."

6. Like Canada geese, swans seem to radiate happiness, a quality that humans might want to consider emulating. The trumpeter sounds alone are enough to put a smile on your face. Swans seem to project power and positive thinking. It is impossible to be depressed around these glamorous vegetarians. They simply won't allow it.

7. Swans, while tame, retain their wildness. They're not as friendly as Canada geese but in their own way seem to like people. They also seem to revel in the sound of the human voice.

"When they swim by, they say hello and I say hello," says David Karopkin, a legislative aide for the City of New York, who also heads Goosewatch, an advocacy group for humane protection of swans and other wildlife. "I think of animals as individuals," he adds, "and swans have interesting personalities."

8. The International Symbol of World Peace is in trouble. The New York Department of Environmental Conservation (DEC) has declared war on the entire mute swan population in its state. Among other things, the DEC, in its swan management plan, accuses swans of being invasive because they came here in the 1800's. So did our ancestors. Who cares? What difference does it make now? The real reason, says Sheila Bolin, CEO of the Regal Swan Foundation is to introduce a species more conducive to trophy hunting (i.e. Cecil the lion). That means mute swans throughout the U.S. must die, she says, and be replaced by trumpeter swans for hunters. The trumpeter swan, North America's largest waterfowl, is considered the prize game bird.

"This insane killing program must be stopped before it's too late," says Bolin.

If there are mute swans in your area, there are ways to get involved. Commerce Township in Michigan, for example, was successful in preventing this carnage last summer by passing legislation protecting swans in its area. Anyone can do the same.