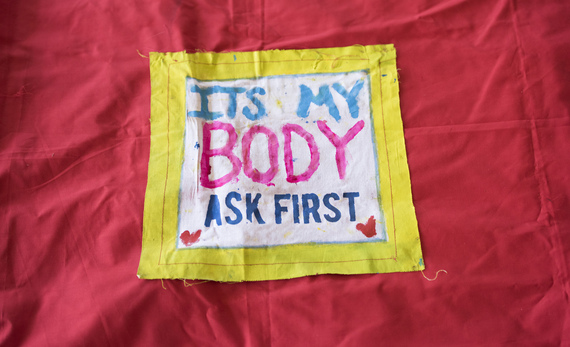 by Sarah Marcantonio, a student at Emerson University in Boston, with additional reporting from Em & Lo

Here's my definition of sexual consent: two (or more) people actively, explicitly and consciously agreeing to have sexual interactions throughout those interactions, with no party having any reservations at any point. I was taught, both in high school in New Jersey and here at Emerson College, that "Only yes means yes," so a lack of "No" cannot be taken as consent.

Fortunately, more and more people my age share this understanding of the concept of consent, thanks to recent media coverage of the epidemic of college sexual assault and various efforts to stop it:

Some have taken issue with the "1 in 5" stat often used, siting the infamous Rolling Stone article on an alleged campus gang rape that was based on false allegations, or the fact that the AAU study might have suffered a non-reporting bias (i.e. people who haven't been assaulted might be less likely to fill out this kind of survey), or that the study's authors emphasize that this is not necessarily nationally representative, or that acts simply without affirmative consent were included. But if you only account for nonconsensual penetration or sexual touching by force or incapacitation -- what some might consider "legitimate rape" -- the number is still a scary 11.7 percent. Whether it's 1 in 10 or 1 in 20 or 1 in 50, it's too many, especially at institutions of higher learning where students are supposed to be becoming better citizens. Talk to any woman or gender non-conforming person, and there's no denying that sexual assault -- from unwanted sexual touching over clothes to oral, anal or vaginal rape -- happens in mystifying numbers, both on and off campus.

In an effort to get a sense of how well -- or not -- American colleges are currently dealing with this issue, I conducted an informal online survey of 46 friends and friends of friends from at least 19 colleges* across the nation (5 responses were anonymous). Here are my conclusions: