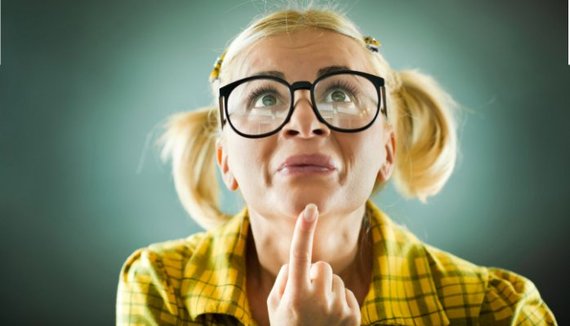 It's good to be smart. On the surface, being smart looks like easy living. But there's another side to the story.

Intelligent people have a reputation for making dumb mistakes, especially in situations that require common sense. The simplicity of these situations and the abundant intelligence of those who tend to muck them up can be downright comical.

"Common sense is not so common." -Voltaire

Scientists are finally beginning to understand why this happens. Shane Frederick at MIT was among the first to conduct research that explained why rational thinking and intelligence don't tend to go hand in hand.

In his studies, Frederick gave people simple problems to solve, like this one:

A bat and ball cost a dollar and ten cents. The bat costs a dollar more than the ball. How much does the ball cost?

Psychologists from James Madison University and the University of Toronto wondered the same thing. They gave similar tests of logic to hundreds of people and compared the accuracy of their answers to their levels of intelligence. The researchers found that smart people were more likely to blurt out the wrong answer because they actually make more mental mistakes when problem-solving.

Smart people are more prone to silly mistakes because of blind spots in how they use logic. These blind spots exist because smart people tend to be overconfident in their reasoning abilities. That is, they're so used to being right and having quick answers that they don't even realize when they're blowing it by answering without thinking things through.

The dummies getting the bat-and-ball question wrong weren't so dumb, either. When Frederick gave the question to students from Harvard, Princeton, and M.I.T., more than half of them got it wrong. Even students from some of the most prestigious universities in the world make stupid mistakes.

Perhaps the scariest thing about the errors that highly intelligent people make is how unaware they are of them. People of all levels of intelligence succumb to what's called the "bias blind spot." That is, we're great at spotting other people's mistakes and terrible at recognizing our own. The sillier the mistake, the harder it is for an intelligent person to accept that they've made it.

While it might seem like we don't spend our days solving logic problems like the bat-and-ball question, the brain functions involved in solving these problems are the same ones we use in everyday thinking. Hence, the tendency to do stupid things follows smart people into the workplace. Consider some of the most common ways in which smart people manage to shoot themselves in the foot.

1. Smart people are overconfident. A lifetime of praise and pats on the back leads smart people to develop an unflappable faith in their intelligence and abilities. When you rack up accomplishments while people stroke your ego, it's easy to expect that things will always go your way. But this is a dangerous expectation. Smart people often fail to recognize when they need help, and when they do recognize it, they tend to believe that no one else is capable of providing it.

2. They push people too hard. Smart people develop overachieving personalities because things come so easily to them. They simply don't understand how hard some people have to work to accomplish the same things, and because of that, they push people too hard. Smart people set the bar too high, and when people take too long or don't get things quite right, they assume it's due to a lack of effort. So they push even harder and miss the opportunity to help others achieve the goals they're so anxious for them to reach.

3. They always need to be right. It's hard for anyone to graciously accept the fact that they're wrong. It's even harder for smart people because they grow so used to being right all the time that it becomes a part of their identity. For smart people, being wrong can feel like a personal attack, and being right, a necessity.

4. They lack emotional intelligence. While intelligence (IQ) and emotional intelligence (EQ) don't occur together in any meaningful way (Smart people, on average, have just as much EQ as everyone else), when a smart person lacks EQ, it's painfully obvious. These high-IQ, low-EQ individuals see the world as a meritocracy. Achievements are all that matter, and people and emotions just get in the way. Which is a shame because TalentSmart research with more than a million people shows that--even among the upper echelons of IQ--the top performers are those with the highest EQs, as measured by an emotional intelligence test.

5. They give up when they fail. Have you ever watched a sporting event and seen the stunned look on the face of an athlete whom everyone expected to win, but didn't? Smart people can easily fall into the trap of seeing failure as the end of the world because frequent success creates expectations that make failure hard to tolerate. People who have to work hard for what they achieve have plenty of practice learning how to deal with failure. They learn to embrace it because they know that failure is just a stepping stone to success.

6. They fail to develop grit. When things come really easy to you, it's easy to see hard work as a negative (a sign that you don't have what it takes). When smart people can't complete something without a tremendous amount of effort, they tend to feel frustrated and embarrassed. This leads them to make the false assumption that if they can't do something easily, there's something wrong with them. As a result, smart people tend to move on to something else that affirms their sense of worth before they've put in the time to develop the grit they need to succeed at the highest possible level.

7. They multitask. Smart people think really quickly, which can make them impatient. They like to get several things going at once so that there isn't any downtime. They think so quickly that, when they multitask, it feels like it's working and they're getting more done, but Stanford research shows that this isn't the case. Not only does multitasking make you less productive, but people who multitask often because they think they're good at it are actually worse at multitasking than people who prefer to do one thing at a time.

8. They have a hard time accepting feedback. Smart people tend to undervalue the opinions of others, which means they have trouble believing that anyone is qualified to give them useful feedback. Not only does this tendency hinder their growth and performance, it can lead to toxic relationships, both personally and professionally.

To some, this post will read like I'm trashing smart people, but I'm not. Some of life's greatest gifts, including high intelligence, can also come with challenges. If you aren't willing to take an honest look at the whole picture, you're selling yourself short. And that isn't smart.

How do you see smart people acting stupid? Please share your thoughts in the comments section below as I learn just as much from you as you do from me.