While the president called for greater opportunity for poor and middle-class Americans during his State of the Union address, the real action on inequality and poverty is happening elsewhere. 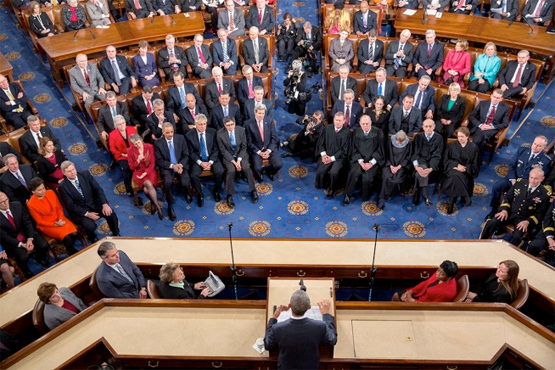 As expected, President Obama made economic opportunity a centerpiece of his State of the Union message on Tuesday. He even took a small step forward by announcing a $10.10 minimum wage for employees of federal contractors.

This is a move in the right direction, albeit a small one. For years, the budget deficit -- not the well-being of working Americans -- has dominated political discussion.

But bolder solutions are called for. While U.S. policies allowed transnational corporations, Wall Street banks, and the wealthiest Americans to recover from the collapse of 2008, for many in the 99 percent, this remains a time of sustained unemployment, low-wage jobs, and economic insecurity.

After years of pressure by well-endowed think tanks and lobbyists, President Obama as well as lawmakers on both sides of the aisle have bought into the idea that our country is broke. This is not the case. GDP per capita, has doubled over the last 40 years, while wages have stagnated. It's not that our nation's wealth has gone away -- it's just being tied up by the top 1 percent. And their power over politicians is keeping it that way.

In fact it is just this concentration of wealth that makes the economic growth we see in GDP charts so ineffective at improving the quality of our lives. If we were to measure the real wealth of our society -- our health and well-being, the health of the natural world, our level of education, etc. -- we would see that inequality itself is reducing our nation's well being, and the power of big corporations is allowing the degradation of our communities and environment.

In the State of the Union address, President Obama called for opportunity for all Americans:

"What I believe unites the people of this nation, regardless of race or region or party, young or old, rich or poor, is the simple, profound belief in opportunity for all--the notion that if you work hard and take responsibility, you can get ahead."

What would it take to make that dream a reality? Here are eight places to start. Some require action that President Obama could take without waiting on a recalcitrant Congress -- like scrapping the Trans-Pacific Partnership. Others are already being implemented at the state or local level and could be implemented much more widely.

While some cities are criminalizing homelessness, the state of Utah has chosen a simple and compassionate approach: giving people homes. With a roof over their heads, people can take on substance abuse, recover from domestic violence, look for work or attend school. There are no strings attached. These residents are not required to be sober or to get help, although they are encouraged to do so. The result: a 78 percent reduction in homelessness, and the state expects to have ended homelessness by 2015.

A college degree should not require decades of indebtedness. The average student debt now sits at just under $30,000. Oregon has found a good solution. By a unanimous vote, the legislature adopted a plan call "Pay it Forward, Pay it Back," which creates a special fund that will allow students to attend state universities tuition-free. In exchange, they will pay 3 percent of their salaries for up to 24 years after graduation. This plan lowers the barriers for anyone who is willing to work hard for an education.

President Obama's Affordable Care Act was designed to allow insurance companies to continue profiting from our health care system. The result is a system bogged down in bureaucracy, with multiple plans offering benefits and expenses at different levels and a complex system of subsidies designed to make private insurance affordable.

The upshot? We'll still be spending a major portion of our health care dollars on overhead and profits (estimates range up to 30 percent), making medical care less affordable for us as patients and as taxpayers. Medicare, on the other hand, provides health coverage for about 3 percent overhead. The state of Vermont is among the states looking at adopting a plan like Canada's, in which everyone receives coverage similar to Medicare. Relieving us of the cost burden of a bureaucratic health coverage system could do a lot to relieve poverty.

The United States imprisons its people at the highest rate in the world; more than 2 million Americans are now behind bars. This is devastating to impoverished families and communities, especially communities of color. And it costs taxpayers on average over $30,000 per year per inmate--much of which goes to a private prison system that lobbies for tougher prison terms to keep their facilities full.

Even years after their release, many formerly imprisoned adults are unable to get jobs or receive public services, and many aren't allowed to vote. Ending the failed "War on Drugs" in favor of substance abuse treatment would save taxpayers billions and allow vulnerable families and communities to heal. Washington and Colorado have taken an important first step in this direction by legalizing (and taxing) marijuana.

5. Guarantee everyone a basic income.

In his State of the Union speech, President Obama celebrated the drop in unemployment rates. The truth is that there simply aren't enough jobs for those who would like them; 10.4 million remain unemployed and an additional 10.2 million have temporarily given up looking or work part time because they can't find full-time jobs. There were on average 2.7 job seekers for every job opening, as of November.

Instead of punishing these people, or the disabled, or those raising children or caring for elders, we could simply guarantee everyone a basic income. Many countries in Europe do this. A guaranteed minimum income could simplify safety net programs while making sure no one is destitute. And, since everyone would have money to spend, it would maintain a stable customer base for businesses.

Also by Sarah van Gelder:
• 10 Hopeful Things That Happened in 2013 to Get You Inspired for What's to Come

• Italy's "Slow Food" Pioneer: How My Love for Food Ripened Into a Life's Work