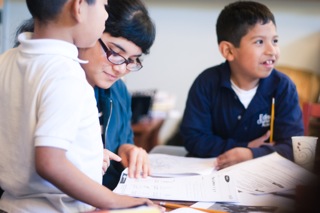 The Valencia Bay-farer is 826 Valencia's only in-house newspaper written for students by students (ages 8 to 14). Our intrepid reporters learn lessons about the various aspects of journalism, from crafting ledes to interviewing to citing sources and at the end of each five-week workshop, we release a new issue full of articles about the kinds of things you'd love to read if you were a kid. We hope you enjoy these articles. To learn more about 826 Valencia, visit our website.

Last year, there was a boom in anti-Islam ads on public buses and subway cars. They appeared in Washington D.C., Chicago, San Francisco, New York City, and Fort Lauderdale in the fall. The ads resurfaced in San Francisco in the spring, causing a controversy. Some advertisements include quotes from important Jihad leaders, such as "Killing Jews is worship that draws us closer to Allah." Another, "Soon we shall cast terror into the hearts of the unbelievers," is from the Quran. Another statement reflects the beliefs of the American Freedom Defense Initiative, or AFDI. The AFDI is an anti-Islamic organization. The organization's statement says that, "in any war between the civilized man and the savage, support the civilized man."

Christy Colcord, a Bay Area resident who has seen the ads, believes that "free speech is one of the most important aspects of American life," but hate speech shouldn't appear on the side of a bus, "regardless of the point or who it's directed at." While speaking to the Examiner, District Attorney George Gascón mentioned, that it would violate the First Amendment "if MUNI were to refuse the ads because of their offensiveness." Executive Director of the AFDI, Pamela Geller, adds that the ads don't say every Muslim is a terrorist. However, many people think that the advertisements are targeting Muslims directly, and making them feel that it's unsafe to ride MUNI. Gitanjali Shahani is a San Francisco citizen who has read about the ads. Shahani believes that Geller's ads "make MUNI seem less welcoming and possibly unsafe for a certain population in our city." Offensive as these ads may seem, she believes that "legally, MUNI would be violating Geller's free speech by refusing the ads."

Even so, MUNI has rules drawing a line between free speech and hate speech. One rule states that, "SFMTA prohibits discrimination based on national origin, religion, and other characteristics as well as condemns statements that describe any group as 'savages.'" Some think that the extremist language in the ads qualifies as hate speech. Colcord believes that the messages are "inciting hatred by misinterpreting a group." This goes against MUNI policies, although no one can prove that the messages are discriminating against one race or religion. Colcord says, "She's getting around it by saying she didn't say it, it's a quote," referring to Geller and her dodging of MUNI policies.

Shahani mentions that Geller's ads "became a farce in the process, since MUNI allowed them but did not endorse them." In other words, MUNI had no choice but to allow the ads to be shown. However, MUNI did not support the ads, so they ended up becoming meaningless. In conclusion, the controversy has two reasonable sides. One side supports free speech and believes that Geller is exercising her right to it. The other believes that the ads are hate speech, use bad language against Muslims, and shouldn't be allowed. What do you think? Is it worth hurting and offending people to exercise your free speech? Or are your rights more important?

Under California's Three Strikes law, petty thieves and shoplifters don't get a strike against them and aren't charged for life; but it wasn't always like this. Before, it was the opposite. When it first started, it was really easy to get a strike. One prisoner's last strike was stealing a doughnut worth fifty cents. He was sentenced to twenty-five years to life. Many repeat offenders like this went to jail.

The Three Strikes law was put in place after a crime where a twelve-year-old girl was murdered on a sleepover and people wanted harsher punishment for repeat offenders. The government not only wanted to make California safer, but comfort people after the death of this child.

In 2012, the law was changed again; in a surprising vote, 60.8% of voters decided to change the law. The law changed after many people complained that violators were getting charged for non-serious crimes. One of these concerned citizens, who would like to remain anonymous, said, "I think it was a waste of money and a waste of people's potential to lock them up for third strikes that were not violent." He also said, "I am against locking people up for non-violent offenses and I think the new law is better at matching the punishment to the offense."

Most people are happy with the changes to the Three Strikes law. Some are not. Shoplifting and other non-violent crimes are still serious. Some people suggest further changes. A lawyer, who would like to remain anonymous, said, "It depends on the strike."

"I believe the first strikes need to be for a violent crime or otherwise serious felonies," she said, "while the later strikes can be for non-violent, more minor felonies." She also believes that there is not enough evidence that the law had an impact on violent felony rates or recidivism. "I don't think the law was likely to make us much safer," she concluded.