This story originally appeared in the June 4 edition of Model D.

Their ankles flip-flopping behind them as they lay on their bellies, 826michigan volunteer tutor Merideth Garcia and University Prep Academy fifth-grader Emetrionna are perched up on elbows, thoroughly engrossed in a writing assignment in the third floor common area of the school.

At University Prep, students are pulled out of the classroom once a week to work with tutors on specific writing projects their teachers deem need improvement.

But the students gain much more than better skills in writing and language.

"Struggling kids flourish in this setting," says Ben Curran, an instructional coach at University Prep. "When students work with a tutor, when they’re given a safe place and a safe person to work with, they’re more interested in making an effort." 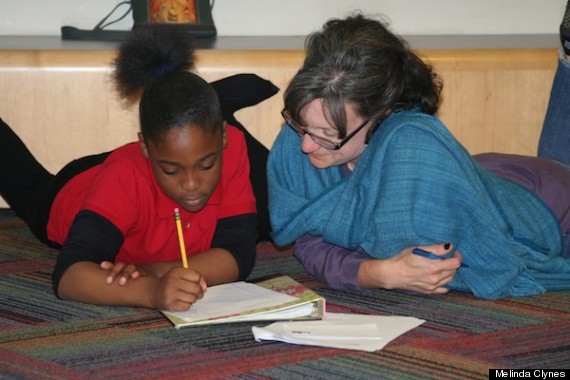 Curran says that progress translates across all subjects, not just writing.

And that’s just what the program is aiming to do: help students be more open to learning, unafraid to ask questions, and confident in their writing.

"Sometimes we get misconstrued as an organization that just teaches writing, and we do in some ways, but it’s more than that," says Amanda Uhle, executive director of 826michigan. "We are helping students succeed in school and in their lives."

826michigan first opened shop Ann Arbor in 2005. Its In-School Residency Program and drop-in writing workshops have helped many Ypsilanti and Ann Arbor kids find inspiration around writing. And now the nonprofit is coming to Detroit. 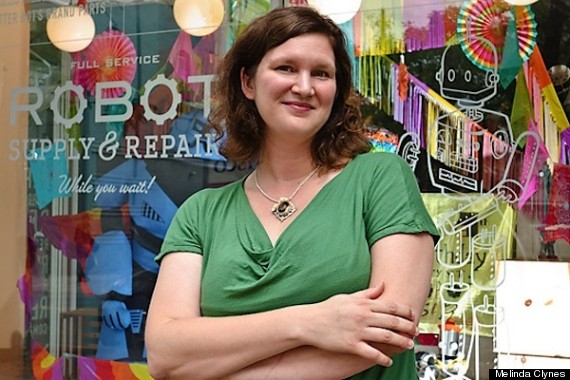 While 826michigan is an independent nonprofit, it is a chapter of 826 National, an umbrella organization that works to open 826 programs across the country. All 826 programs are based on the original 826 Valencia started in San Francisco by writer Dave Eggers to mentor kids in creative writing.

That creativity is nurtured through the in-school tutoring programs, which not only help students get over their writing hurdles, but help the teachers too, who have little time to provide the one-on-on support many students need.

Fran Lazette, a teacher at Amelia Earhart Elementary School, applauds 826michigan. The tutors at this school work with students individually in the school library and occasionally work in Lazette’s classroom when there is a complicated activity, answering questions and providing extra assistance.

She says the program helps fill a gap in classroom learning, especially in a class of more than 30 students with a wide range of abilities.

"When students go to tutoring, they are working on materials that are designed specifically to address their needs," says Lazette. "This helps the student greatly by working at their own readiness level and focusing on areas where they currently have deficits."

826michigan has been working with three Detroit schools -- University Prep, Amelia Earhart Elementary School, and Bunche Elementary School -- since February. The program caters to the specific student needs at each school.

Another byproduct of 826michigan’s work with young people is confidence.

Even more than a program that teaches writing, 826michigan helps build confidence in the classroom. When tutors coach students through understanding concepts and feeling like they have something to say, they become more successful.

The program will continue during the warm weather months, serving students for five-week summer school sessions at three schools. It’s also going to be offering creative writing workshops to students at Clark Park. 826michigan is looking for volunteers to work with both programs.

Recruitment efforts for volunteers is ongoing; the more volunteers the program has, the more students it can serve. Volunteers attend a short training session and need to make a time commitment based on their volunteer assignment.

One of the ways the program is being introduced to potential volunteers, parents, and students is through monthly open houses at its Detroit headquarters located in the Model D building on Second Street and Prentis. The next open house is slated for June 25.

While no special requirements are needed to volunteer, other than an interest in writing and literacy, the caliber of volunteers is often impressive. The Detroit crew is small, but brings a diverse range of talents – and plenty of enthusiasm in working with children.

Alex Nunez-Renitas volunteers at Earhart Elementary. A Spanish-speaking native of Puerto Rico, the Wayne State University College of Education student is a good fit for the Southwest Detroit school.

Merideth Garcia, who has worked with Emetrionna at University Prep since February, was a classroom teacher for 10 years and is now working on her PhD.

Her affection and interest in her student is sincere. Emetrionna devours the writing assignment with a giddy excitement that is rare for an elementary school student who normally struggles with writing.

"Kids look forward to seeing someone who is consistent and cares about them," says Courtney Wise, 826michigan’s Detroit program manager and volunteer coordinator. "Even just for a couple of hours a week."

Melinda Clynes is project editor for Model D's series on city kids. Our partner for the series is the W.K. Kellogg Foundation.