Since the dawn of time, caves have held a special attraction for people the world over, whether as a site for religious rituals, the den of legendary monsters, a place for some weekend exploring, or, simply, a cozy place to live. And due to their permanent nature, cave homes also happen to be wonderful repositories of historical and cultural artifacts from many different civilizations and, well, just plain cool!

We've looked at the experiences and recommendations of over 800,000 travelers from the minube community and found some of the world's most incredibly and breathtaking cave structures. From desert cities from 300 B.C. to thriving subterranean neighborhoods in modern Europe, here are nine amazing cave towns you can still visit. 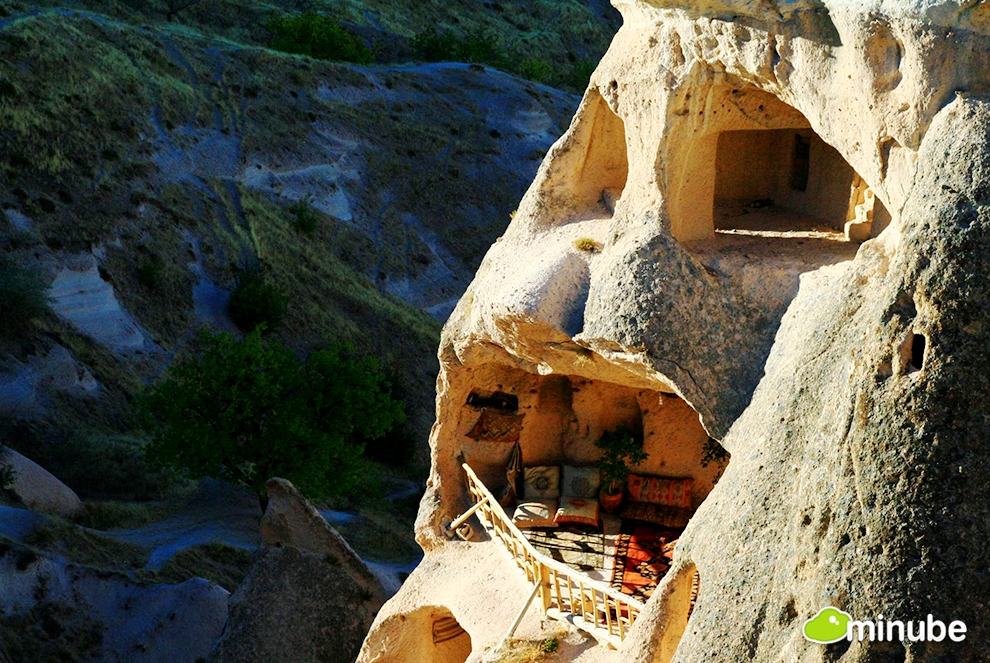 Göreme, Turkey - Nestled in the otherworldly region of Cappadocia, the town of Göreme is perhaps the world's most famous and well-recognized cave village and a popular launching point to explore the surrounding Göreme Natural Park and its Byzantine-era carved basilicas and frescos. But the real treat here is just exploring the streets of this small village at sundown, an experience one traveler described as "the setting for any of your childhood fairy tales." (Photo by Luis A. Martinez) 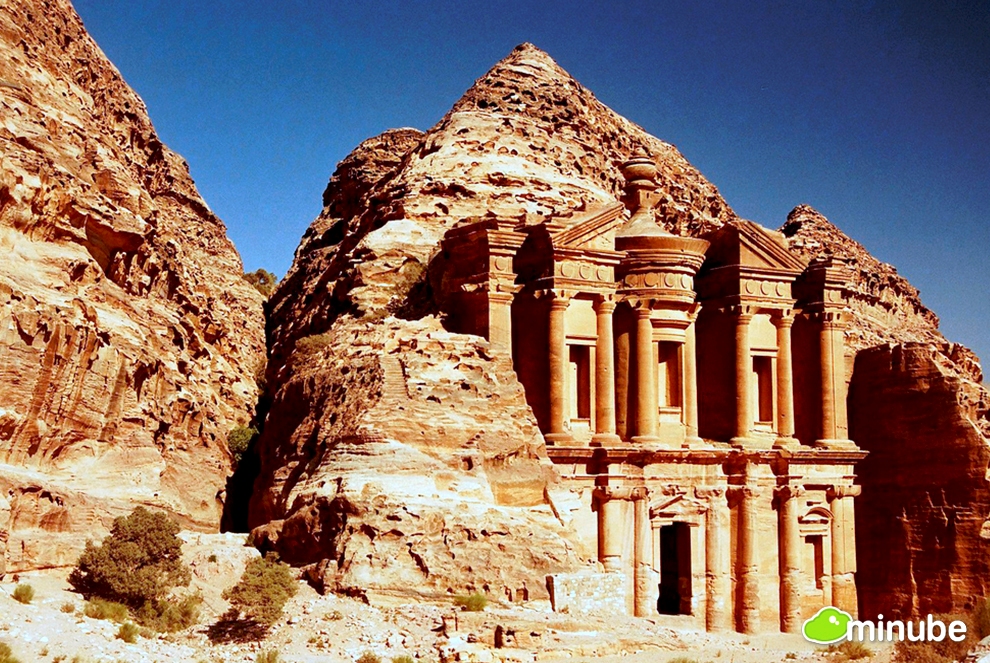 Petra, Jordan - The mysterious city of Petra is a wonder of ancient architecture carved into the rose-colored rocks at the foot of Jordan's Jebel al-Madhbah mountain. Established by the Nabataean civilization as early as 312 BC and later incorporated into the Roman Empire, Petra is now the country's most popular tourist attraction and the impressively-columned Treasury building has been the setting for numerous Hollywood movies. As stunning as Petra is, though, it's also the reward at the end of an equally amazing journey, one that many travelers do on horseback through the basin's maze-like crevasses. (Photo by Nacho Destinosport) 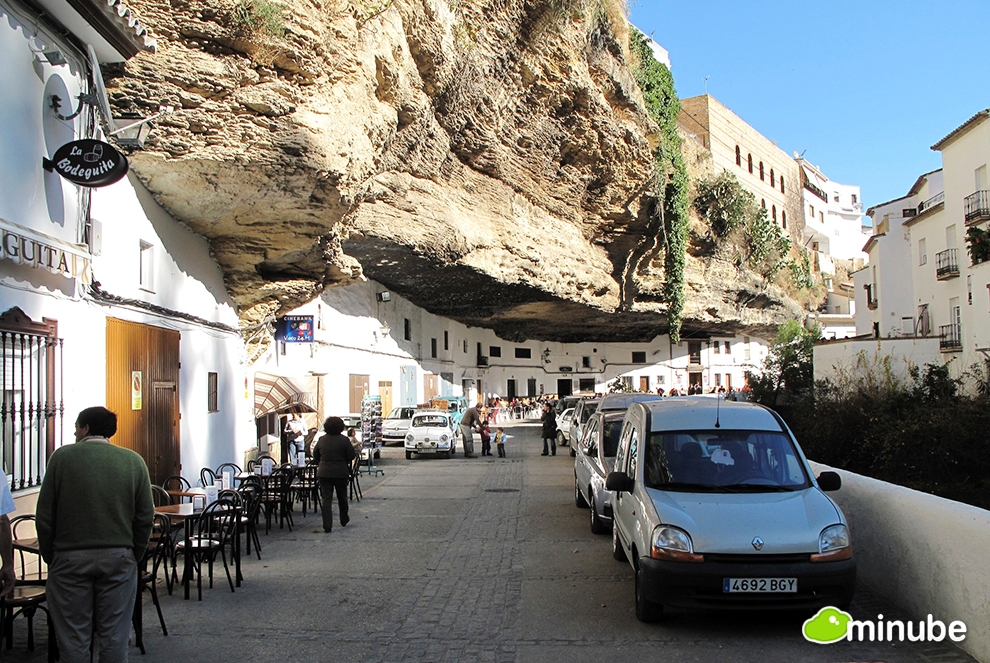 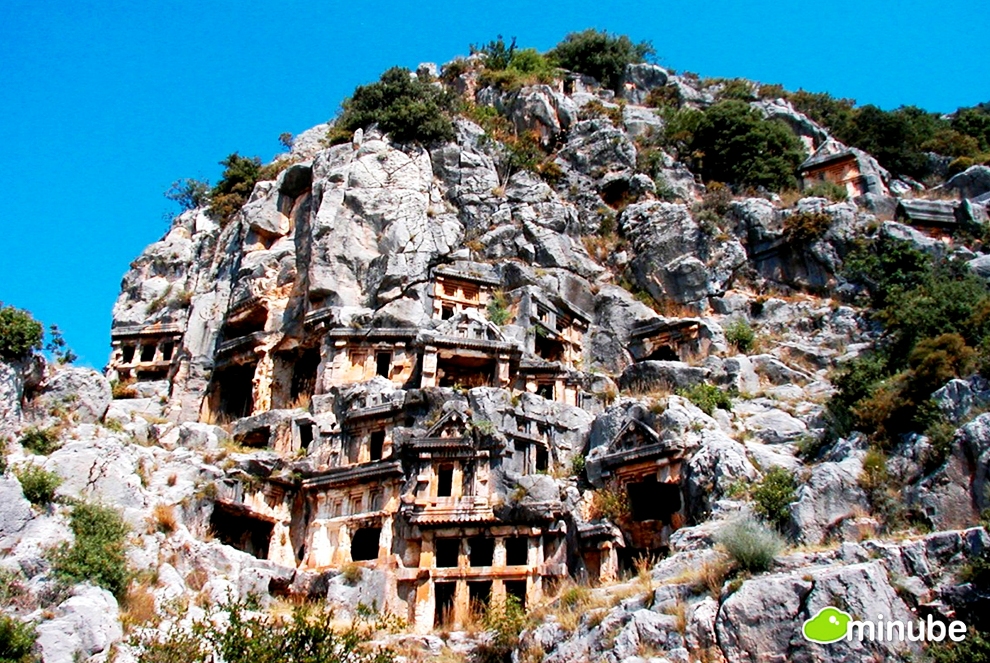 Myra, Turkey - The ancient Lycian town of Myra is one of the many historical gems found on Turkey's Mediterranean coast. While the ancient city also boasts a postcard-ready Roman amphitheatre overlooking the water and the tomb of St. Nicholas (of Santa Claus fame), the area's most spectacular attraction is the Necropolis, a series of intricate tombs carved into several cliffs overlooking both the ocean and a river. As jaw-dropping as the exterior might be, the real treasure is found inside where the chambers are decorated with reliefs and funerary depictions. (Photo by Macgreg) 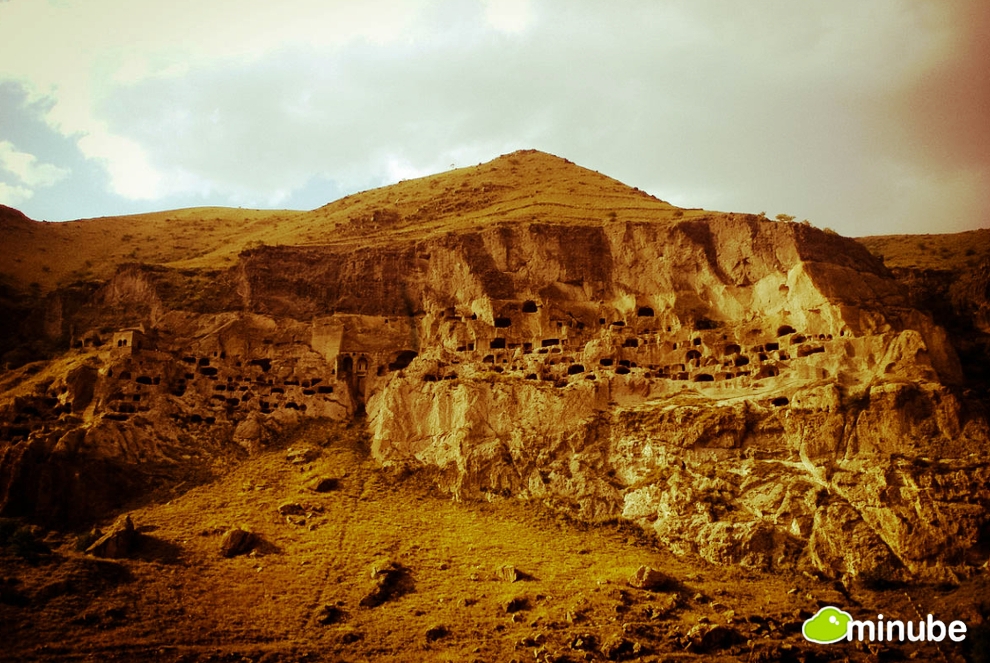 Vardzia, Georgia - Probably the least-known and most mysterious cave village on our list is Vardzia in the Black Sea nation of Georgia. But, what it might lack in international prestige, it certainly makes up in sheer immensity. This monastery complex built primarily in the 12th century houses an incredible 6,000 rooms and was designed to hold up to 40,000 people, a staggering feat even by modern standards. Vardzia is still home to a small group of monks, but the majority of the complex is now a museum. Given its remoteness, experienced travelers say the best (and cheapest) option is to stay in one of the tranquil campsites nearby. (Photo by Germán León) 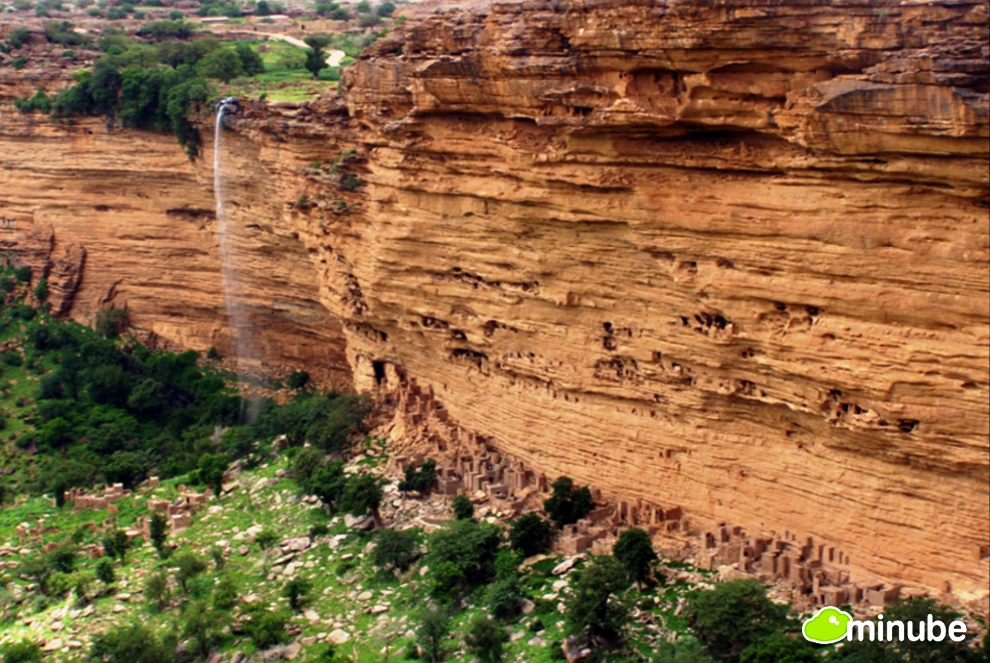 Bandiagara Cliffs, Mali - The Bandiagara Escarpment is basically Africa's answer to the Manitou and Mesa Verde cliff dwellings of the American southwest. Built into the foot of Cliffs of Bandiagara (over 1,500ft. high) by the early Tellem people of West Africa, this cliff village has managed to stay off the tourism radar until very recently but is gaining popularity due to the construction of a new highway and various international grants for infrastructure and preservation. Thinking of planning a trip? The best bet is to hire a local guide to explore the local Dogon villages and their whimsical architecture, and make the 1.5hr. hike to the top of the cliffs to take in the breathtaking views of the valley floor. (Photo by Alice Ortega) 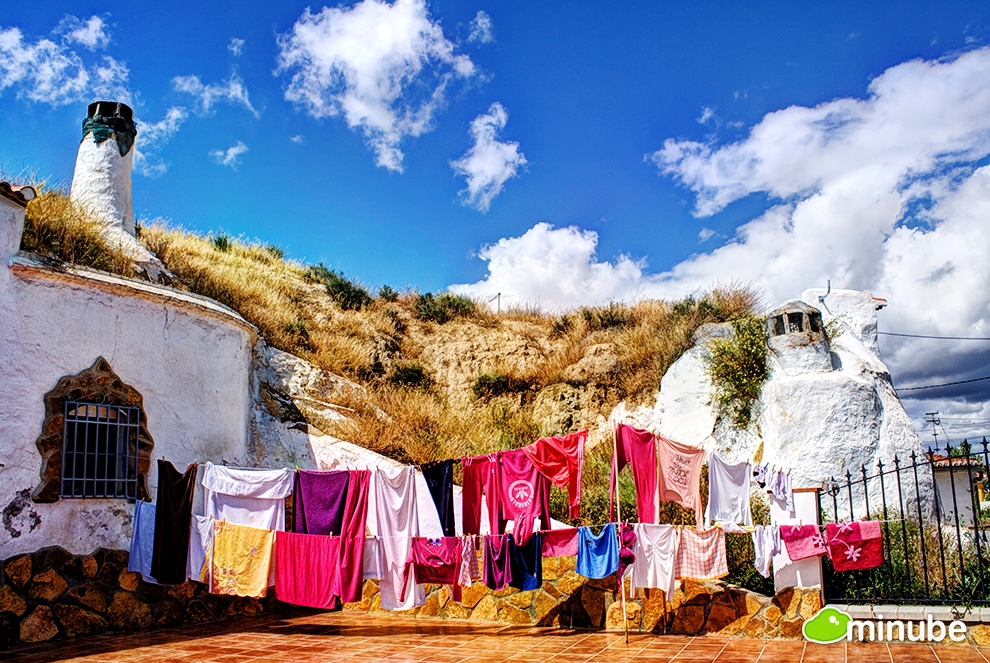 Guadix, Spain - While Europe's cave dwellings have mostly gone the way of museums, one of the few actively inhabited sites (along with Italy's Matera) is found in the Barrio Santiago neighborhood of Guadix, in southern Spain. Visitors to this curious area will be surprised to notice stark white-washed chimneys jutting out of the otherwise un-marked ground, the main sign of the over 2,000 cave homes running in the area. And while Guadix is home to a nice cathedral and, of course, the Barrio Santiago, many travelers choose to use the village as a relaxing launching point to explore the region around Granada and the Costa Tropical. (Photo by Jesús S. Gonzalez) 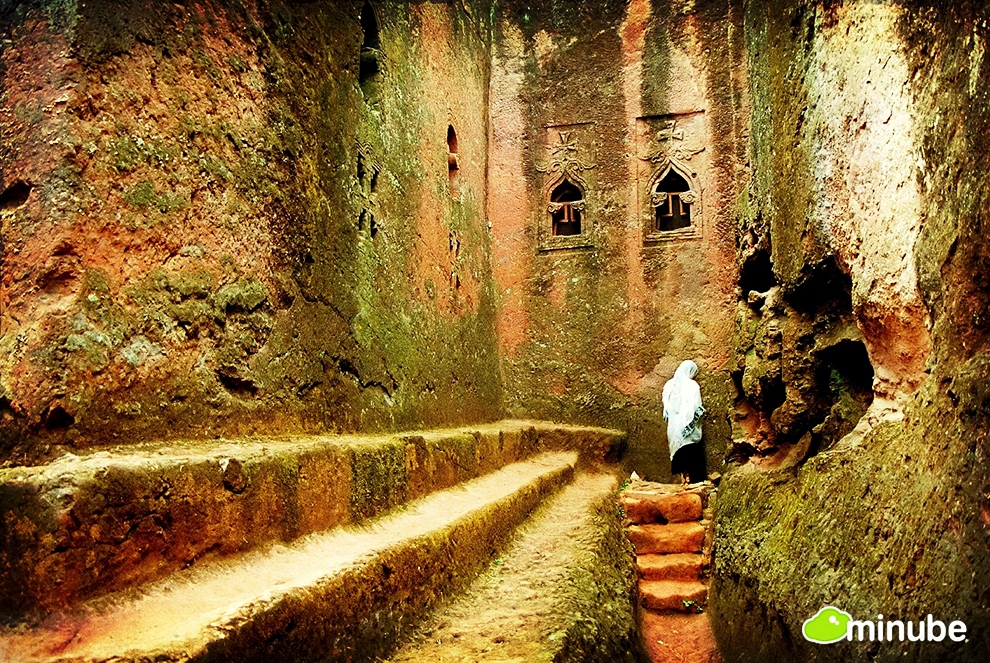 Lalibela, Ethiopia - While not a cave town, strictly-speaking, the Ethiopian holy city of Lalibela does have an amazing series of building and churches carved down into the living rock beneath the city, the most famous of which is the 12th Biete Giyorgis, often referred to as the 8th Wonder of the World or the "Petra of Africa." After seeing the 11 impressive bedrock churches, travelers can explore the ancient labyrinth of tunnels and grottoes inhabited by Orthodox monks, an experience unanimously described as "magical." (Photo by Alfonso N. Táppero) 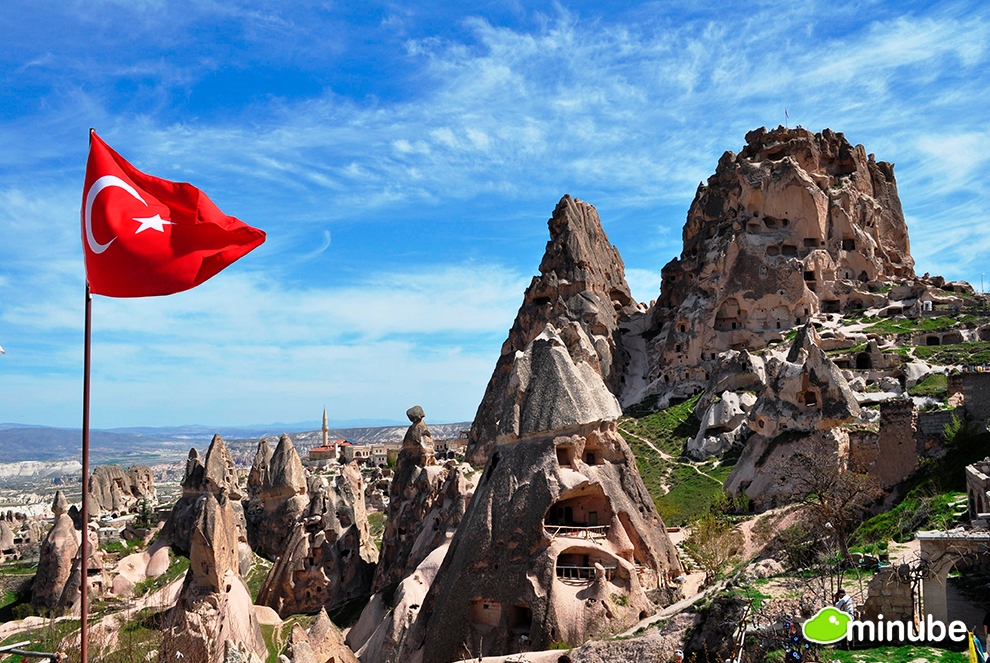 Uçhisar, Turkey - Only a few miles from nearby Göreme, the Cappadocian village of Uçhisar is famous for its Kalesi, or "castle," a massive rock jutting out of the top of the village that is riddled with a distinctive and honeycomb-like system of caves. Travelers can explore the Kalesi via a winding system of stairs and tunnels and marvel at the Byzantine tombs in the upper floors and finally be rewarded with one of the most amazing views to be had in all of central Turkey. (Photo by Carolina Rivera)