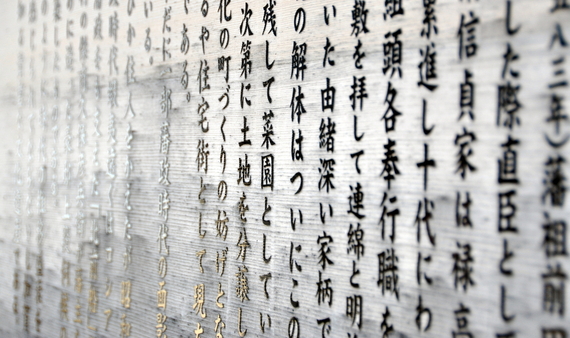 There are plenty of reasons to learn Japanese. For one, the Japanese are Kings of "Soft Power", or cultural influence. The internet, videogames and children's cartoons are heavily influenced by the cute, cuddly touch of Japanese heritage. While some of this reaches us, it is only the tip of the iceberg. Plus, plenty of the nuances in Japanese culture are lost in translation.

Even though Japan has taken a series of economic blows over the last few years, it remains the fourth largest economy worldwide (after the EU, U.S. and China) as well as home to major international corporations including Toyota, Mitsubishi, Nippon.

Even the Lean Startup method, invented by Eric Ries as a structured approach to testing a startup idea, was inspired by Japanese auto manufacturers, which brought us to the "fail fast, fail often" mentality that defines startup technology hubs like San Francisco and London.

There are a horde of apps waiting if you wanted to learn Japanese on your smartphone. Some allow you to test the waters and see if it's for you; others offer comprehensive courses in the language. Here are the best.

A stellar textbook-type app, Mirai employs a "tutor" who reads out a script while you follow along. The explanations are thorough, and where Japanese words pop-up, which is unsurprisingly often, you can toggle them from rōmaji (English spelling) to Japanese writing. Having someone reading out pronunciation is especially useful, and the first 20 lessons are free! There's a similar app, Tae Kim's Learning Japanese, but which is not nearly as user-friendly.

Apologetically calling its own system "corny," Dr. Moku's Hiragana Mnemonic is a great app for memorizing Hiragana: the Japanese alphabet. It uses mnemonics: creating associations between words and ideas or pictures. For example, む is pronounced "mu" -- so they drew a picture of a cow into it. After a half hour, I was blazing through each exercise: highly recommended for beginners.

Human Japanese Live is a favorite among students of Japanese. Setup like a textbook, divided up into chapters and exercises. It's made much better than its dead-tree counterpart by having soundbites attached to all characters and words, as well as other tricky parts of learning Japanese (like stroke order: the order and direction every line has to go in) laid out and easily understandable. A must-have, if you're serious about learning Japanese.

Some MindSnacks games, which do a range of languages, to be too simple to be helpful, but they've proven popular with a lot of others. The app gives you a series of games, and to win any of them relies on you getting familiar with Japanese words, written and spoken. Sounds good, but it's very much learning by rote -- which suits some people and not others.

iAnki isn't  a purpose-built Japanese app, but makes it onto this list for being a well-devised flashcard app. You download the app, create a log-in and then you can either create your flashcards or download some online. For Japanese there's a mix of flashcard playlists, "Japanese Clothing;" "Animals;" and "Hiragana;" among others.

iKnow is a great app to get invested in, by which I mean that while it doesn't offer anything better than Dr Moku for Hiragana, or iAnki for word memorising -- what it does do is offer an extensive and interesting course for learning Japanese. By now, you're already spoilt for choice with such courses, but as they say "variety is the spice of life:" if you don't take a fancy to Human Japanese Live, iKnow might be up your alley.

Memrise is a popular app with language learners (it has courses for Arabic, Chinese, as well as plenty of European languages). It's pretty much a case of linking words from one language to another, in this case English to Japanese. It's an effective way to remind yourself of vocab and is gamified so it's a little more fun: you get points for every correct answer. But there's some awkward ordering of words and sounds which makes it less than perfect.

This app really great dictionary for your phone: breaks-up words for pronunciation, explores conjugations and is very soft on people coming to the language for the first time. If you're getting serious about learning the language, this will be a potent tool in your arsenal.

And if you were offput by the price tag, imiwa? is in many respects the free version of the Japanese app. It's not quite as user-friendly, but given there's no charge and it gives detailed translations in several languages, it'd be a good place to start for someone just dipping their toe in. Frustratingly, neither of these apps have a sound function to hear how the words are pronounced.

Between these apps there's the potential to go all the way with learning Japanese: although it should be part of a 'healthy balanced diet' of hearing and speaking the language as well. Use sites like Busuu, which has a chat option, to practice with native speakers. For everything else, good luck!