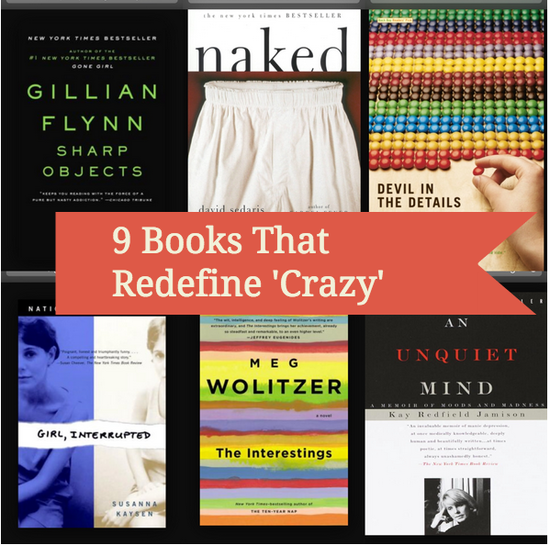 Everyone is a little bit 'crazy.' At least that's my theory. And as a neurologist, I'm quasi-educated on the matter. Do I include myself in that statement? Of course I do! I wouldn't be a writer if I hadn't spent some time in therapy. Craziness is in the eye of the beholder, and the line between madness and sanity is often a gray one.

For me, literature has been a way to lessen the stigma of mental illness. Instead of using labels like 'crazy' to define a complex human being, these books present complicated characters who show us the nuances of mental illness, creating compassion and awareness.

1. Sharp Objects by Gillian Flynn. Our heroine has a troubled past. Her mother had Munchausen syndrome by proxy, literally sickening her daughter's childhood. The heroine's chosen coping mechanism is cutting -- with words. Her skin becomes an encyclopedia of her survival. As an adult, she becomes a reporter who returns to her hometown to find out who is killing girls down there. Thrown back into her mother's grip, she fights to keep herself not only sane, but alive, all while tracking down the killer.

2. Naked by David Sedaris. I warn you now: Do NOT read this book on an airplane, or you will be apologizing to all of your seat mates for your hiccupy, uncontrollable laughter. Making fun of himself (and his family), Sedaris has turned the memoir into a comic art form. In a "Plague of Tics," he enumerates the manifold tics from his Tourette's syndrome, including licking light switches and kissing newspapers, to his own humiliation and his father's ire.

3. Devil In the Details, Scenes from an Obsessive Girlhood by Jennifer Traig. Like Sedaris, this author describes her childhood OCDs, complete with hours of handwashing and a rarity called "scrupulosity," a disorder of hyper-religiousity where a person feels compelled to carry out religious rituals. Coming from a mixed marriage, the author was not actually well-versed in Judaism, so she invents her own pseudo-Jewish rituals, such as putting napkins on her head during meals and creating an original version of kashrut. Her behaviors ultimately lead to a visit to a perplexed rabbi who helps to make the diagnosis.

4. Tweak by Nic Sheff. This book stands out in the pantheon of addiction literature. (Though he also notes that he has bipolar disease, thus carrying a dual-diagnosis, as do many patients with addiction.) Following his father's excellent account of his child's descent into addiction in Beautiful Boy, Nic Sheff gets to tell his own side of the story. From meth binges, dating older actresses and a flirtation with alcoholism, this is one wild, cautionary tale of growing up.

5. Girl Interrupted by Susanna Kaysen. This list would be incomplete without the story of a girl who took a detour through a psych ward on her way to adulthood. The genre is memoir, but the book is just as much a mystery. The question burning through every chapter is, is she actually mentally ill? Kaysen offers evidence both for and against. One of her symptoms, "promiscuity," is hardly convincing. Yet another, depersonalization (where she scratches her skin and demands an X-ray to verify she has bones), seems a bit more so. When Kaysen finally gleans her diagnosis from all her medical records, "Borderline Personality Disorder," the answer is all the more vague and unsettling. We never truly know whether she was "certifiable" or not, which is perhaps the whole point.

6. The Interestings by Meg Wollitzer. In this novel, it is the main character's husband, not the protagonist herself, who suffers from depression. We are given a spyhole view into the spousal experience of depression, which also doubles as a history lesson in its treatment for the last 20 years. Her husband has been successfully treated with difficult-to-use MAO inhibitors -- until he nearly dies from eating food with tyramine (which interacts with this medication). He suffers through years of soul-sucking depression while trying medication after medication, until finally discovering an SSRI that evens out his neurotransmitters and delivers him back to himself.

7. An Unquiet Mind by Kay Jamison. A psychologist who is an expert in bipolar disease discusses her own experience with manic depression. Her unique perspective is at once scholarly and deeply personal. She resists taking Lithium, which slows her mood cycling, but also deadens her energy and highs. Mania is destructive, but at the same time, irresistably enticing. Unfortunately, it is also always followed for her by darkness, months of "pitiless, brackish, almost arterial levels of agony." In the grips of such depression, Jamison takes a massive overdose to assure a "successful" suicide (a success she reasons, "one can live without"), but is luckily thwarted by her brother. After time, she learns to embrace her medication as a gift which allows her to live.

8. It's Kind of a Funny Story by Ned Vinzini. This is a sort of a "Boy Interrupted," with a haunting young voice telling his coming-of-age story in a psych ward. Each daily act during his depression is an effort, even eating or talking. Just being hurts. To lift himself out of this state, he focuses on the "anchors" that ground him while battling the "tentacles" that threaten to pull him back down at every turn. The young boy does beat his depression, but sadly in 2013, the author committed suicide. Sometimes craziness can seem like "kind of a funny story," but sometimes it is just painful and tragic. His story (like The Bell Jar by Sylvia Plath, as well as Unquiet Mind) serves as a reminder that depression is a real illness which can be fatal.

9. Little Black Lies by Sandra Block. In my new novel, the protagonist is a psychiatrist who sees her own psychiatrist for ADHD and PTSD stemming from childhood memories of her mother dying in a fire. While battling her own demons, she works to help her patients, and sometimes the two worlds collide. Little Black Lies is a novel of memory and madness, where sometimes the truth is more dangerous than the little black lies we tell ourselves just to survive.