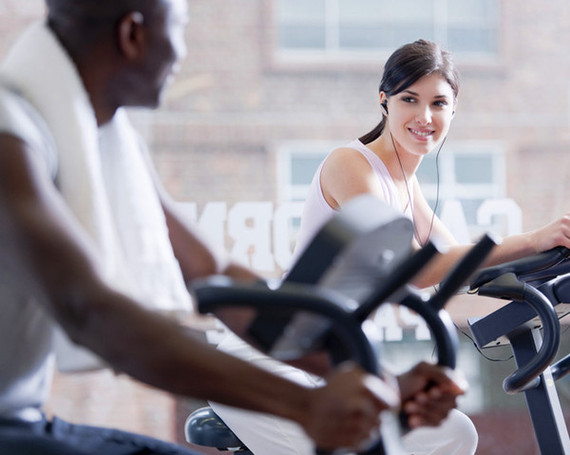 People watching isn't exactly the reason we hit the gym -- but it is a nice perk. There's always a cast of characters, all sweating it up in one place. It's easier to push yourself just 15 more minutes on the treadmill when you're imagining a backstory for the guy on the stair climber next to you. It's also fun to think of him asking you on a date while you crush on him from afar. In this spirit, we give you nine gym characters every fit girl secretly lusted after, even if you'd never publicly own up to it.

1. The Beefy Body Builder Who Grunts with Every Bicep Curl
Oh, you know the one. He's a staple at gyms across America. You never see him in, say, the supermarket, so you're pretty sure he doesn't exist outside of the weight room. Initially, the audible signals of just how hard he's working weirded you out. But slowly, you've started digging his dedication and "I don't give a f-ck-ness." And let's face it: There's no doubt he'd be able to protect you from danger in a dark alley any day of the week.

2. The Hipster Always Wearing Short-Shorts and Sweat Bands
Gyms attract all kinds; even organic coffee-drinking, Lucky Strike-smoking hipsters have started wanting in on the endorphin boost from exercise. We bet you have one of these guys. He's trying so hard to look retro; you wouldn't be surprised if he soon busted out a Walkman and a box of Wheaties. He's got sweatbands on his head and his wrists, yet you've never witnessed him perspire a single drop as he slow jogs on the treadmill. Come on--we know you've fantasized about leaving the gym with him to discuss the environmental impact of those disposable water cups while lounging around his studio apartment listening to Arcade Fire on the record player.

3. The Lean, Soulful Yoga Instructor with Symbol Tattoos
He's ripped in a way that can only come from hours of side plank. You've taken his yoga class and spent most of Savasana wondering whether he has a girlfriend named Moonbeam. You're secretly hoping he invites you to share a wheatgrass shot and a transcendental meditation session with him after class. It won't be long before you're sporting your very own Yin Yang tattoo.

4. The Lululemon Model Who Never Misses a Weekday Workout
Okay, she's not an actual model but is still killing it in her designer workout gear. This is everyone's closet girl crush. Her exercise clothes are always coordinated and just the perfect amount of fitted. She is disciplined about her daily hour of cardio but throws in strength training at least three times a week, too. You've considered asking her to get coffee so you can get a detailed play by play of her workout and diet regimen, but you know chicks like this probably avoid caffeine or have power business lunches/music video shoots to attend after they're done at the gym.

5. The Preppy Coed Who Works Behind the Desk
Sure, he smiles at everyone when he hands out towels at the front desk. But you swear he holds your gaze just a little bit longer. He may or may not be studying for a calculus exam back there, but you're convinced you have plenty in common. He sees you at your sweatiest and still manages to wink, smile, and ask if you had a good workout when you leave. You insist one of these days he'll work up the nerve to tell you to skip your kickboxing class and run away with him. Or just grab a drink. You'd be game for either.

6. The Guy/Girl Always on Their Phone While Doing Cardio
PSYCH. Nobody likes this person. They should be banned from the gym. We just wanted to make sure you were paying attention.

RELATED: The 12 Most Annoying People at the Gym

7. The Guy with #Dadbod Halfheartedly Trying to Tone Things Up
With the latest surge of guys not caring about their slight beer belly, you're surprised this guy is even at the gym. Of course, this dude is only in it so he can say he goes to the gym. He does a few minutes on the treadmill, a few minutes on the bike, and a few pushups--then he's out. But you acknowledge his efforts nonetheless. He's obviously in a hurry most days so he can meet his buddies at a sports bar to watch the game on time. Admit it: You've imagined drinking cold beer and eating hot wings with this guy. Or being the one who gets you two off the couch on a Sunday.

RELATED: Why Women Are More Accepting of "Dad Bod" Than Men Are of "Mom Bod"

8. The Senior Citizen Staying Active, Per Doctor's Orders
He mainly sticks to walking the indoor track or using the resistance machines, doing the same rotation day in and day out, but you admire his discipline. Sometimes he's not even wearing proper gym clothes, but nobody ever said exercising in high-waisted khakis and a Hawaiian shirt was a crime. So maybe this guy isn't a romantic crush, but how about a little Tuesdays with Morrie action of your own? You picture the two of you jogging a marathon together some day, toasting at the finish line for what the accomplishment means for both of you in your respective stages of life. All right, that might be pushing it. But he does always make you smile when you're en route to the indoor-cycling studio.

9. The Guy Who Only Wears His Favorite Team's Jersey
Does that tank top jersey look way better on Chris Paul? Most certainly. But this guy still wears it with pride. He only uses the gym for the basketball court, but you applaud him for always working up a sweat and enjoying playing with others. He's clearly boyfriend material--if he can pull himself away from his myriad of intermural sports tournaments one of these days.

More:
healthy livingFitness and Exercisehealth and fitness
Newsletter Sign Up
An essential daily guide to achieving the good life
Subscribe to our lifestyle email.
Successfully Subscribed!
Realness delivered to your inbox

The ultimate guide to looking and feeling great. Get the latest in health, fitness, fashion, beauty, and more!