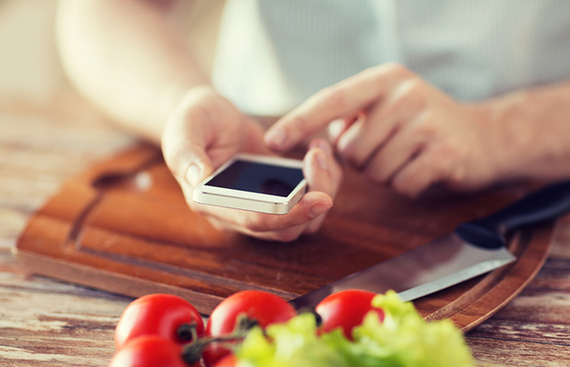 By Sarah Elizabeth Richards for Life by Daily Burn

You've heard it before: Research shows that the daily act of recording every bite and step you take is a useful tool to maintain your weight over the long term. "It keeps me accountable," explains Kristin Miller, 31, a Manhattan mom and skin care consultant who lost four pounds with popular food-tracking app MyFitnessPal in February. "It helps me understand how much I'm eating in a day and what portion sizes are."

But just because you've downloaded the app, doesn't mean the pounds will start melting away -- you've got to use it right. That's why researchers at MyFitnessPal's parent company Under Armour took a deep dive into the habits of the app's 420,000 top members (defined as those who came within five percent of their goal weight) out of their database of 4.2 million users. And the results might surprise you.

Before you reach for that box of Cheerios, check out these trends -- and tips from loyal trackers -- to learn what the weight loss winners did differently.

The 9 Most Unexpected Habits of Successful MyFitnessPal Users

1. They don't skimp on calories.
No juice cleanses here! The top users didn't have to resort to extreme measures to successfully lose weight. Women consumed about 1,300 to 1,400 calories daily; and it was about 1,800 to 1,900 calories for men, according to the data. They enjoyed their healthy fats, too. The most successful users all ate roughly the same macronutrient breakdown: 46 percent carbs, 35 percent fat and 19 percent protein.

2. They always log in -- even when it's not pretty.
It shouldn't come as a surprise that successful users logged into the app more frequently -- six days in a row, instead of just three days for the tracking slackers. They even logged in over the winter holidays. "Successful users are twice as likely to log in on Thanksgiving and Christmas," says Rebecca Silliman, director of communications for MyFitnessPal.

Antoinette Pierce, a Daily Burn 365 user who's lost 20 pounds since January 2015 using MyFitnessPal, even forces herself to chronicle her slip-ups. "I don't cheat. If I have a beer (or two or three) or Prosecco or cake or ice cream, I include it all, even if it pushes me over my daily calorie allowance," says Pierce, 43, a stay-at-home mom from Charleston, South Carolina. "The only day I don't use it is on Sunday, which is my rest day."

3. They figure out how to maximize their calories.
Using the app to compare the nutrition in a boxed macaroni and cheese meal to what she'd get from a giant salad left Miller astonished. "If you're trying to lose weight, you become very aware of how you can get the most bang for your buck in your diet," she says. That means choosing foods that help you stay fuller longer. "I knew I'd feel better with the salad," she says.

4. They use the "repeat meal" function frequently.
If you eat the same thing nearly every day, MyFitnessPal has a feature in which you can add an entire meal without having to look up every single ingredient again. That helps Miller when she wants to log her favorite salad and doesn't have time to re-enter each portion of cucumbers, peppers, carrots, onions, chicken and olive oil.

5. They plan out their eats in advance.
While Miller documents her food intake as she goes, Pierce enters everything she plans to eat first thing in the morning. "I realized that if I added all the meals and how much water I should drink right away, I was more likely to actually stick with it," says Pierce. Also, the ability to see her projected food intake helps her re-adjust, if needed. For example, if she observes that her planned lunch is high in calories, she can scale back her dinner plans.

6. They store their favorite recipes.
Successful users cook more, too. They logged twice as many recipes than the less active users. "We know from other data that users who logged in recipes lost 40 percent more weight than users who didn't," says Silliman. The recipe feature helps Pierce plan out three to four dinners for the week ahead. "I create my own entry for my favorite turkey meatloaf recipe, and I make that on Sunday," she says.

8. They don't regard every walk around the block as a license to eat more.
MyFitnessPal regulars know the app allows you to increase your daily-allotted calories by exercising more. But the best users know not to get carried away by tracking every single step. "I don't count my walk to the subway or walking with my son or dog as an excuse to eat an extra 100 calories," explains Miller. "That's normal everyday activity that your body is used to burning."

9. They look up everything.
On a recent trip to a famous Brooklyn pizzeria with her husband, Miller logged a long run beforehand so she'd have enough calories to spare. Still, unsure of portion sizes, she looked up thin-crust pizza on the app while waiting for their food to arrive. "I had two slices, some salad -- plus a cookie from a nearby bakery -- and I was really full," she says. "The app gives you permission to really enjoy your food because you know exactly what you're eating."

Why You Might Want to Rethink Weekend Cheat Days
The One Thing That Helped Me Lose Weight
Gym Time or Meal Time: What Matters Most for Weight Loss?