Illinois-native animals are frequently in competition with other species attempting to take over their habitats. We call Illinois the "Prairie State" because there are hundreds of miles of mostly flat, grassy land that are home to thousands of different species of plants and animals. Many of those animals, such as raccoons, made Illinois their home a long time before humans arrived. Others, such as certain kinds of rats and mice, only showed up with European settlers.

According to the Illinois State Museum, at one time there were 29,000 native animal species living in the state. Shrinking territory has driven out some species, such as the gray wolf, mountain lions and the American elk. Others, including the passenger pigeon, have become extinct. Bison are the biggest mammals to have lived in Illinois.

Black bears, which the University of Illinois Wildlife Directory says were common in Illinois until 1870, currently do not have any permanent populations in Illinois, though three individual bears have been spotted since 2008. (If Illinoisans see a black bear, they are encouraged to report the sighting to the state Department of Natural Resources.)

Here are 9 animal species native to Illinois, meaning they have lived in the state without being introduced by humans: 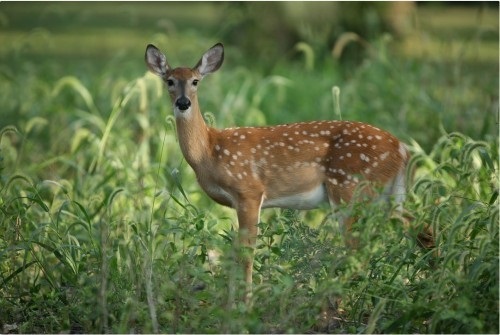 The white-tailed deer is the state animal of Illinois and is protected under the state's wildlife code. The U of I's Wildlife Directory it is the biggest native herbivore in Illinois. The animals live throughout the state and their population has grown larger today than it was at the first arrival of Europeans in the area. They were nearly eliminated from the state in the 1800s and a conscious "restocking effort" began in the 1930s. They live in woods near rivers and can weigh up to 250 pounds. White-tailed deer eat leaves and twigs and are sometimes hunted by coyotes and bobcats. They can be legally hunted in the fall and winter. 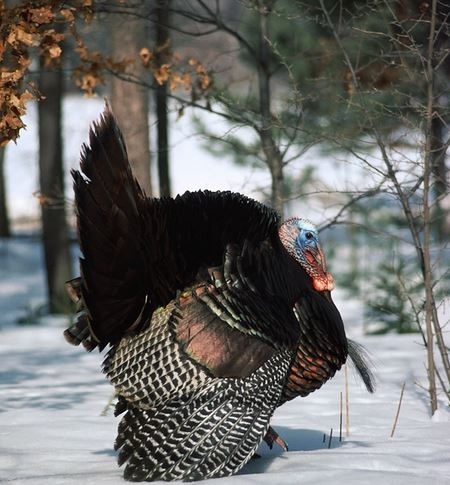 The eastern wild turkey is the only turkey species found in Illinois, says the U of I Wildlife Directory. It became extinct in Illinois in 1910, but was reintroduced through conservation efforts. Males can weigh up to 24 pounds. They live in wooded areas, but usually establish nests near tree lines. They eat plants and insects and can live up to 10 years. Eastern wild turkeys can run faster than 12 mph and can fly up to 55 mph. The Wildlife Directory advises Illinoisans to "make a lot of noise" and "wave your arms" to chase away an aggressive turkey if it tries to intimidate you. The Department of Natural Resources administers fall and spring turkey hunting seasons in Illinois. 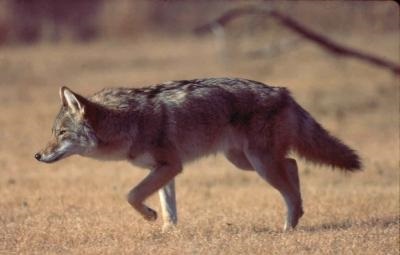 Coyotes are members of the dog family that have gray or reddish bushy fur and usually weigh between 20 and 40 pounds. They have green eyes and the University of Illinois Wildlife Directory says coyote's "yaps and howls...may be their most distinguishing characteristic." They live all over Illinois, mostly in "semi-open country," but can be found living even in the urban landscape of Chicago. There are approximately 30,000 coyotes living in Illinois, says the Illinois Department of Natural Resources. Illinoisans are discouraged from approaching coyotes and should keep an eye on small outdoor pets in the evening in areas where coyotes may be present. 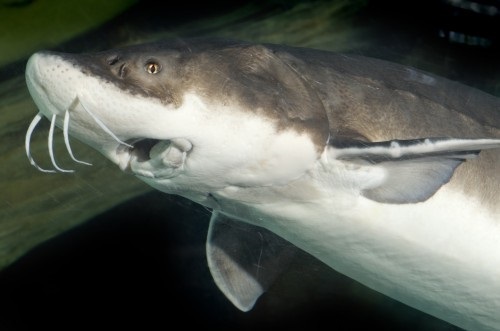 Lake sturgeon are the biggest species of fish in North America. They can grow to be more than six feet long, weigh up to 200 pounds and live to be 150 years old. The family of fish to which they belong has existed for more than 135 million years, says National Geographic. They are gray in color and eat snails, fish eggs and other creatures from the bottoms of lakes and rivers. They were once especially abundant in the Great Lakes, says National Geographic, but faced "unsustainable" catch rates for their meat and because they are so big they damaged fishing gear. It is protected as an endangered fish in 19 states and is seeing a resurgence in its population. 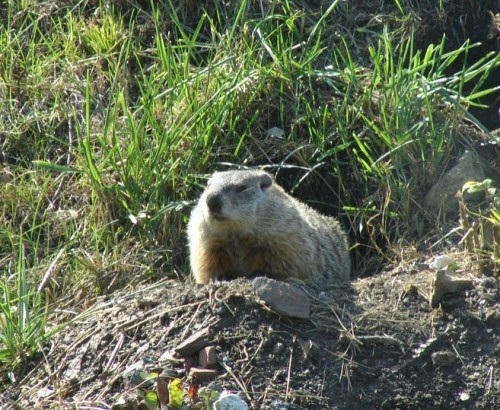 Woodchucks are rodents that sometimes also are called ground hogs. They are the largest members of the squirrel family in Illinois, weighing up to 14 pounds. The Wildlife Directory says they live in open meadows of crop fields and live much of the time underground. They eat mainly grasses and other plants and have been known to steal a bite from crops such as carrots or soybeans. They are one of the only hibernating mammals in Illinois, going dormant from October to February. They can live up to three years, but often face predation by dogs, coyotes and hawks and are frequent victims of car strikes. Woodchucks can be hunted in rural parts of Illinois with a permit. 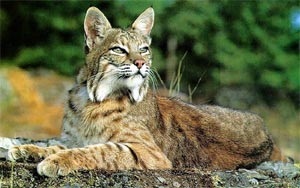 Bobcats look like common house cats, but are about twice the size, says the Illinois Department of Natural Resources. They live in forests throughout Illinois. Because their habitat is so limited, development began to threaten them in the 1800s, and bobcats became the first animal to be listed as a threatened species in Illinois in 1977. They were removed in 1999. There are an estimated 5,000 individuals in the state. They are nocturnal and can climb trees, where they eat birds and squirrels. The biggest threat to adults is car collisions, not other predators. They are known to howl and meow. A bill to allow hunting of bobcats was passed by the General Assembly in 2015 and now awaits action by Gov. Bruce Rauner. 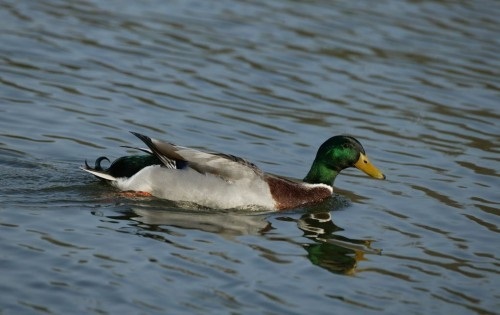 Mallard ducks are the ancestors of almost every other domestic duck breed. They have wingspans of up to 37 inches and males have a distinctive green head. They live in open water lakes and ponds in Illinois, and are especially common in suburban areas in the northern two-thirds of the state. They eat worms, bugs, seeds, seaweed, and most anything else they can get their bills on. They are eaten themselves by crows, foxes, coyotes and snapping turtles, says the U of I Wildlife Directory. They have state protection status under the Illinois Wildlife Code alongside their protection under the federal Migratory Bird Treaty Act. 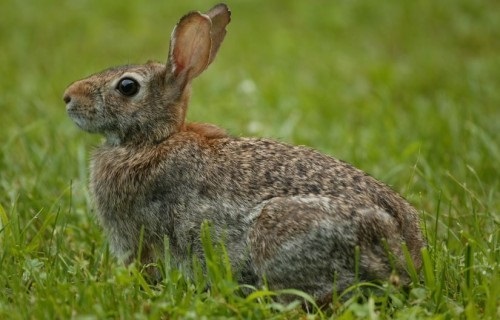 Cottontails get their name from the short, fluffy white tails that contrast with the rest of their brow fur. They weigh about four pounds. In Illinois, the rabbits live in open and wooded areas in rural and urban settings. They live throughout the whole state, but are most common in the southwest parts of the state. One female can have up to 25 offspring in a single year. They eat various types of vegetation, such as grass and dandelions, and will take garden crops, says the U of I. When avoiding predators such as owls, snakes and bobcats, cottontail rabbits first remain quiet and still and then run away in a zig-zag pattern. 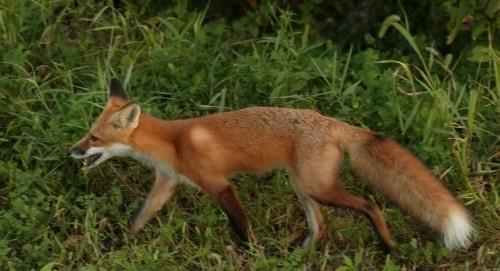 Red foxes are members of the dog family and weigh up to 14 pounds. The U of I Wildlife Directory says they are the only Illinois mammals with red fur. They live throughout the state in rural and urban areas and are especially common in the north. They live in the abandoned and expanded dens of woodchucks and other burrowing animals. Both male and female red foxes care for their young, which can live up to seven years. They hunt at night for rabbits, mice, eggs and fruit. Sometimes they'll collect extra food and save it for later. Illinoisans usually are discouraged from approaching red foxes, as they can carry rabies. They are protected under Illinois law, but nuisance animals can be removed with a permit from the Department of Natural Resources.

Check out Reboot Illinois to see six more animals native to Illinois that you can find both in water and on land, and even a few you might see in both! Also, be sure to check four species which are invasive to Illinois, including the scary-looking Sea lamprey.

NEXT ARTICLE: Chicago has the most rats of any city, says pest-control company