When President Barack Obama called on Congress to raise the federal minimum wage to $9 per hour in his 2013 State Of The Union Address, he defended the pitch by saying "no one who works full-time should have to live in poverty."

Unfortunately for him, it appears $9 per hour won't quite do the trick.

A recent report by the Brookings Institute, a nonprofit research organization, has found that a $9-per-hour minimum wage would increase the earnings of low-income households by only 7 percent, jumping to $11,828 from $11,047 on average. Any family of four earning $23,550 or less per year is defined as impoverished, according to the Census Bureau.

One reason is that many low-income households -- which Brookings defines as living in the bottom-third of the country's income distribution -- are supported by workers who already earn more than $9 per hour. For those supported by a someone making less than that, the benefits a $9-per-hour minimum wage would be more significant.

The below chart illustrates as much: 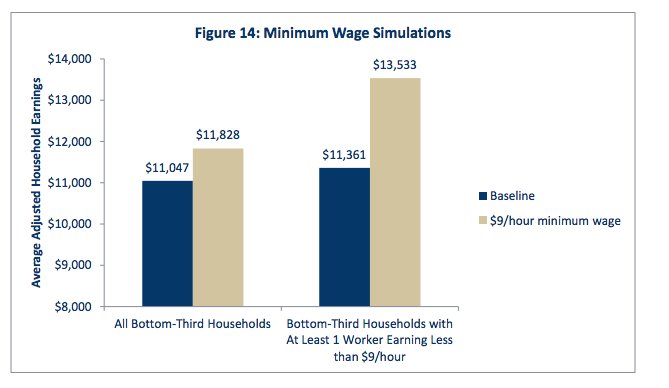 Brookings notes that its financial estimates of a minimum wage increase are conservative, as a higher minimum wage may also make Americans more likely to work, which would further increase the income gains to low-income households.

The federal minimum wage currently stands at $7.25. Legislation has been introduced since the State of the Union that proposes bumping it to $10 per hour.

A previous study by the Restaurant Opportunities Centers United, a national organization focusing on racial equity in the restaurant industry, found that increasing the minimum wage to $10 per hour would be enough to push more than half of the working poor out of poverty.

Countries With A Higher Minimum Wage Than U.S.