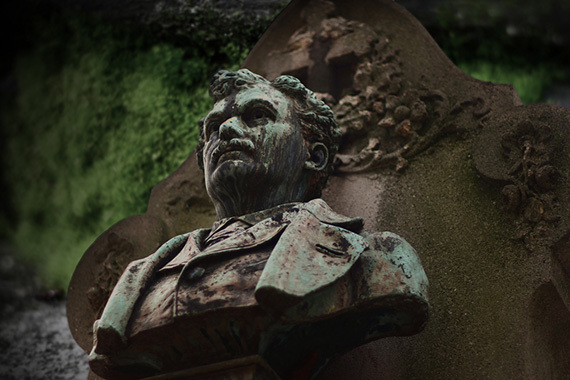 If every cemetery tells a tale, then Père Lachaise speaks volumes. Anywhere from 300,000 to 1,000,000 souls are interred within the walls of Paris's grand burial ground. Along its winding tree-lined paths rest some of the most influential writers, painters, musicians, and politicians in history--many of whom continue to fascinate even in death. 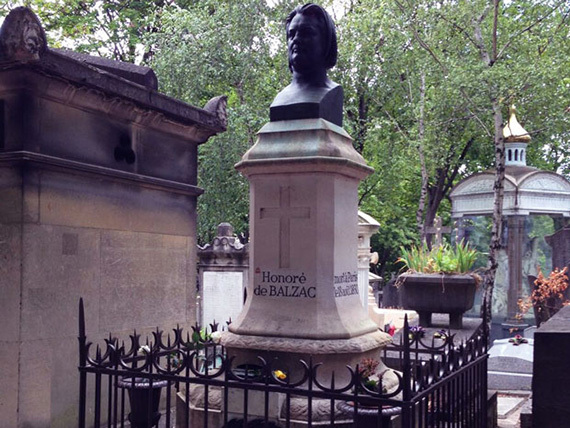 Balzac was a famous French writer from the 19th century. One of his most well-known publications is La Comédie Humaine or The Human Comedy, a multi-volume collection of 90 works depicting the life of the bourgeoisie. Balzac's headstone consists of a bronze bust placed upon a pillar with a quill at its base. The tomb rests in a peaceful spot of the cemetery, with trees and smaller graves surrounding it. 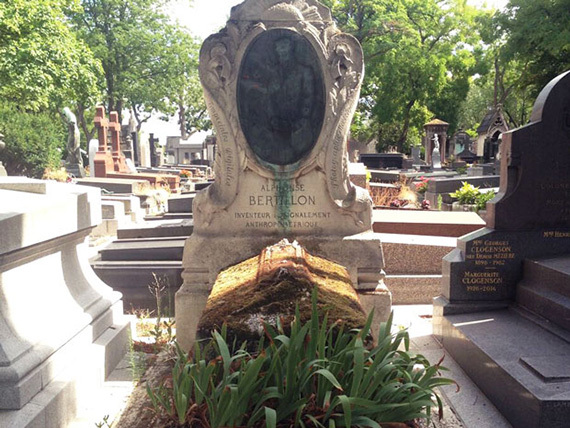 Alphonse Bertillon was a French criminologist from 1853 who established an intricate forensic method used to identify criminals--much of which is still in use today. One facet of the Bertillon system involved taking profile photographs of criminals, now known as the mugshot. Bertillon's tomb, covered in intricate carvings, has suffered from years of exposure to the elements. Moss blankets the top of the tomb, while a twisted bed of tulips (unfortunately not in bloom here) sprout up from the bottom. 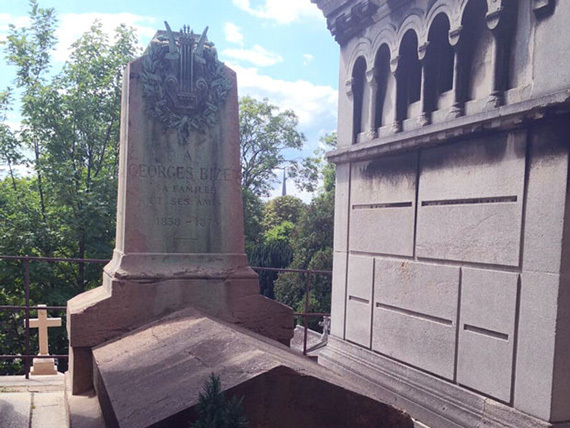 Bizet was a French operatic composer from 1838. The opera "Carmen" is one of his most famous works. He was a gifted child, entering the Paris Conservatory at age 9. In 1857 he won the Prix de Rome, a prestigious scholarship that allows students to study their art in Rome. Bizet's grave overlooks a steep hill dotted with gorgeous trees. His tomb rests in the shadow of a much larger mausoleum, but its simplicity is what draws your eye. Overlooking the grave is a stone marker crowned with an intricate bronze sculpture of wreathed harp. 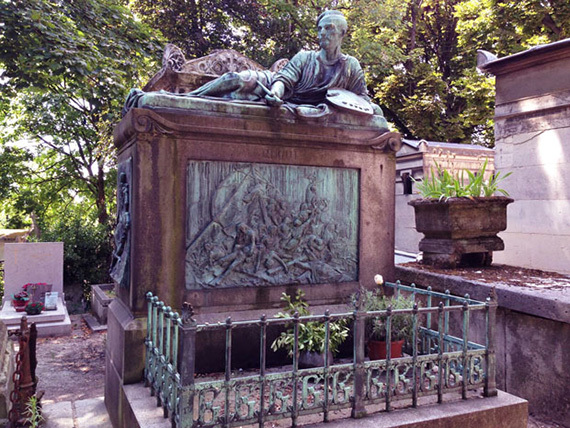 Géricault was a gifted French Romantic painter who died in 1824 at the age of 32. Even if you're unfamiliar with the young master's work, there's no doubting his grave contains an artist. A relief of Géricault's "Raft of the Medusa," which currently hangs in the Louvre, adorns the side of this tomb.

READ MORE: 9 Famous Graves to Add to Your Bucket List 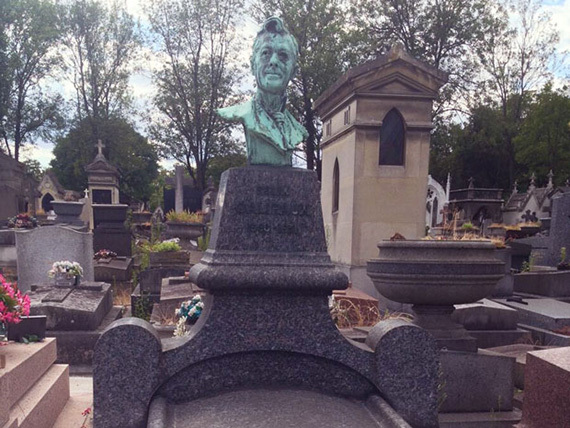 Félix Galipaux was popular musical hall actor in 1880s France. He moved into film around the turn of the century, starring in some of the first sound films ever produced. Galipaux's tomb is crowned with a bust of the man. It's a simple grave but it has a distinction to it. 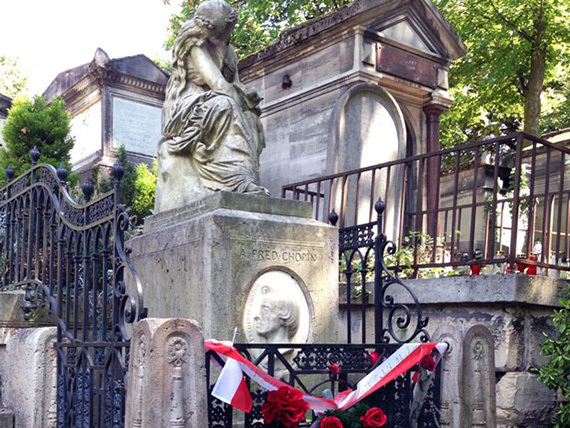 A Polish composer and a prodigy on the piano, Chopin studied at the Warsaw Conservatory. Although he was a virtuoso performer, Chopin preferred to teach and compose for the stage. Chopin's tomb is nestled on a hillside and often difficult to track down--but once you're on the right path it's hard to miss. The intricate fence surrounding Chopin's tomb is covered in flowers. 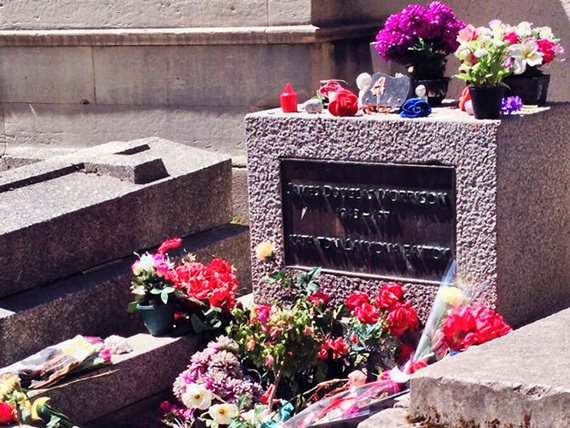 Doors frontman Jim Morrison died in Paris in 1971. He was buried in Père Lachaise, where the party followed the 60s singer even in death. Empty liquor bottles, handwritten letters, and bouquets of flowers littered the unassuming grave throughout the seventies and eighties. Graffiti covered Morrison's headstone and the graves surrounding his burial plot. A bust of the singer, installed upon the grave in 1981 to commemorate the 10th anniversary of Morrison's death, was stolen in 1988. Today, a security guard stands watch over the tomb, curtailing such rowdy behavior. 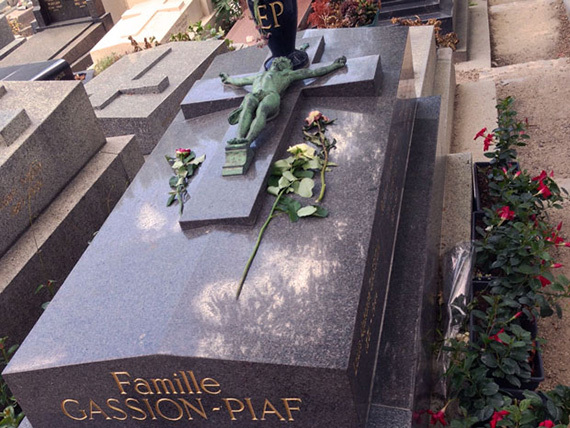 Edith Piaf was a French cabaret singer from 1915 whose soaring voice earned her the title of one of France's greatest stars. Taking a small path off a main road of the cemetery, Piaf's burial plot rests among many other graves similar to it. The simple tomb is adorned with a crucifix and decorated with red roses left by visitors. Standing graveside, it's hard not to hear one of Piaf's moving songs playing in the distance. 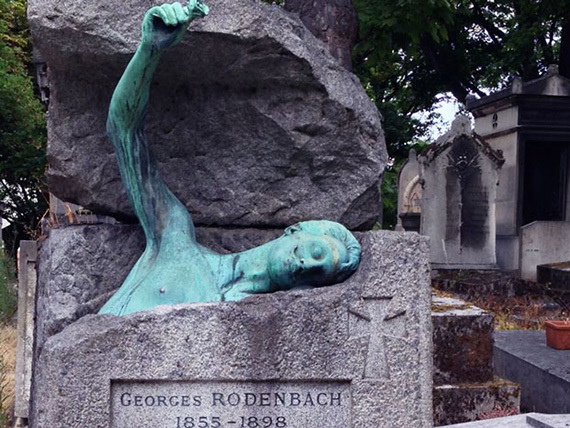 Belgian-born poet and novelist Georges Rodenbach moved to Paris toward the end of his life, where he contributed to the Belgian literary renaissance movement. His famous works include novels Bruges-La-Morte and Le Carillonneur. The author's tomb immediately catches your eye, as there's nothing like it even in the grand Père Lachaise. Similar to the dramatic style of Rodenbach's writing, the tomb is of a man said to be Rodenbach emerging from the grave and grasping a rose.