My kids love playing most family board games, but recently I've been on a quest to find some new games that I'll enjoy playing as well. It's not that I don't find amusement in the classics, but 27 consecutive games of Chutes and Ladders aren't as entertaining as one might hope.

Perhaps it's just me, but there doesn't seem to be a plethora of new board games hitting the market either.

Why is that? Can it be that hard to come up with new family games?

I decided to try my hand at inventing my own board games, and I found out pretty quickly that it actually is extremely difficult to come up with something new. Also, all of my ideas were pulled from real life, which meant that all of my games were tied into parenting.

When I looked at my list, two things became abundantly clear: a) I need to get out more, and b) no one would ever want to buy my games.

Here are my nine board games based on parenting that I'm pretty sure we'll never see on store shelves: 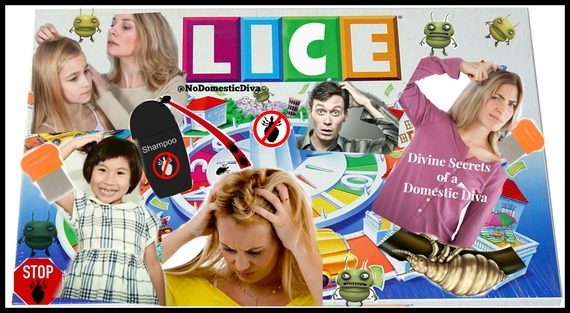 1. The Game Of LICE.
Grab your RID shampoo and your nit combs, and let's start finding some bugs! First one to remove all the lice from the kid's head without the infestation spreading to other family members wins! Don't stop to freak out because if the bugs move on, you'll have to go back to START and do it all over again!

2. Find The Smell.
Sniff, Sniff. Do you smell that? What is it? Where is it coming from? Be the first person to find the source of the stink and... well, really there are no winners in this game.

3. What's That Brown Stuff?
Is it poop or is it chocolate? It's the question of the ages made a pop culture reference by the movie Baby Mama, but that won't make it any easier for you to tell what that brown smudge is... better grab a Clorox wipe just in case!

4. KNOTS!
It's a game of stamina, smarts and strength! Players each get a brush and an angry kid with knotty hair, and you have just minutes to brush it out before it's time for school. Will you make it? Uh oh! It's picture day! Hurry before there's a parenting fail in picture form!

5. Catch The Vomit!
Beginners start with burp rags and baby spit-up; advanced players use buckets with older kids. Bonus points for parents who protect carpets, furniture or other surfaces by catching it with their hands!

6. Hungry, Hungry Babies!
Time to feed the baby! As soon as you begin, the clock starts counting down two hours until it's feeding time again, so you'd better hurry and try to feed yourself, shop, shower, use the bathroom, answer the phone, do the laundry or sleep! Tick, tock, tick, tock! Don't forget to burp the baby, change the baby, soothe and bathe the baby in between too. Wah! Wah! Guess what time it is again?

7. Sleep.
It's a game of chance and a game of luck! Odds of winning while parenting small children are slim to none. Players are more likely to win the lottery or be struck by lightning.

8. How Far Can I Let Myself Go?
Sure, you've got valid reasons: the years of running on little to no sleep, kids to care for, a house to run, work to do... but just how far can you let yourself go and be OK with it? Yoga pants (but never doing yoga) -- OK? Mom Jeans -- OK? Pajama Jeans -- OK? How low can you go? You've got nothing to lose but your pride... if you have any left, that is!

9. Words With Strangers.
Ah, your little darling just started learning to talk! Time to give that vocabulary a workout -- in public! See if you can say words like "sit" and "clock" without any double takes or dirty looks. Then go for the win if you can have the little tyke say "truck" three times without anyone confusing it for, well, you know.

Have you played any of these parenting games before? Have any ideas for new ones?

This post originally appeared on The Divine Secrets of a Domestic Diva blog.