The wedding ceremony is a ritual unto itself yet many of the interfaith and intercultural couples I work with also opt for smaller, significant rituals within the ceremony.

There are many beautiful customs from world cultures and faiths. Woven into the wedding ceremony, they offer you the chance to affirm and celebrate your love as they seal the union between you two and acknowledge the family ties that are established on your wedding day.

Before the popularity of personalized wedding ceremonies, couples went along with the marriage rites, sometimes (often) not really knowing much about what they mean. The modern interfaith couple can actively select the rituals in their weddings, learn more about what they mean, and even make sure that the rituals are explained by the officiant as part of the ceremony -- or included on the wedding program.

"It's very important that we embrace rituals because they make our wedding experience so much richer," event planner Collin Cowie once told me. "Ritual brings us together; it helps us to understand where we come from and where we are going. The whole idea of a wedding ritual is to have a little reflection."

Wedding rituals are typically symbolic markers of the occasion and of the intention of marriage. They may be religious or spiritual in nature, or they can be nondenominational and creative rites. Essentially, they celebrate union and commitment as well as acknowledge the transformations that marriage brings -- going from single to married life, from one family to the merging of two. Just think about it: you start your journey down the aisle single . . . and you leave married!

Sometimes I work with couples to create ceremonies that are an even balance between the culture or faith of each partner and their families -- such as unity candles to represent the Christian side and breaking the glass to represent the Jewish side, or walking seven steps around the sacred fire to celebrate the Hindu side and a loving cup ceremony to celebrate the Scottish Celtic side.

I always encourage couples to select rituals that truly sing to them and that they are comfortable partaking in. And if you are not having a ceremony based on one religious protocol, or the blending of two specific religions, there is no reason not to consider rituals from different cultures -- even if they are not from your tradition -- as well as nondenominational rituals.

For example, at a wedding ceremony I officiated on the Brooklyn waterfront, the couple honored their Jewish, Christian, and Hawaiian roots but their wedding also included Hindu, Native American, and Nondenominational rituals and the participation of 19 family members and friends.

The rituals and customs you choose to include in your wedding ceremony will depend on how you want to honor the tradition into which you were born--if at all--and what rituals "feel right" for you and your beloved. 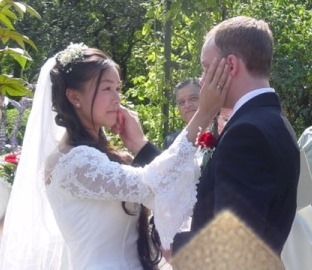 Here is a small sampling of some of the religious and cultural rituals and customs that couples have asked me to include in the ceremony to honor family heritage:

1. Jewish. The breaking of the glass reminds us that while we are joyous, there is still suffering in the world, but that the love of the couple adds to the healing of the world.

2. Christian. Lighting of the family unity candle brings the light of two separate candles together to light the one candle that represents the new union. In a church, it typically includes the union between woman, man, and God and/or the Church.

3. African. Jumping the broom takes a couple from single life into the land of matrimony. It is a custom that originated when slaves would secretly marry as a way to acknowledge their union.

4. Hindu. Satipati, or the "seven steps," is one of the most important rituals, where the couple takes seven sacred steps around a sacred fire. In the Hindu ceremony, this is considered the ritual that seals the marriage.

5. Japanese. The sake ceremony symbolizes the fusion of two lives and offers blessings for long life and good fortune as bride and groom alternately sip from three different-sized cups.

6. Chinese. The red string of fate and red goblet ceremony share the legend that couples who are meant to be together are tied by the ankles at birth to ensure they will find each other when they mature and give the couple a chance to take a sip from two goblets tied together by red string. It symbolizes unity and blessings for shared good fortunes.

7. Native American. Calling in the directions is a way to honor the ancestors and call in the support of the spirits from all corners of the universe. It is an invocation that is sometimes enhanced by setting up a wedding altar composed of natural items representing all the elements and directions--air/east, water/west, fire/south, and earth/north.

8. Hawaiian. The Hawaiian sand ceremony is a way to symbolically blend the lives of two as one as bride and groom, pouring two containers of sand into one container and showing that while they will always be their individual selves, they will never be separate.

9. Pagan. Hand-fasting is an ancient Celtic tradition of literally tying the couple's hands together to signify their bond. This originally was an engagement ritual for ancient Celts, and modern pagans refer to their entire wedding ceremony as a hand-fasting

We've included many nondenominational rituals -- such as planting a seed in fresh earth to represent the the new life that is about to bloom and watering it with blessed water and including a musical or singing performance from one partner to the other or a friend.

If you are having a highly personalized interfaith and/or intercultural wedding, there are many options for your big day. Some couples prefer not focus at all on religion or spirituality, and that is fine too. The most important thing is to celebrate your love, honor your families, and select rituals and customs that are meaningful to your both.

The photo above is of beautiful Anna and Bill, mixing love and cultures.

This column is adapted from my book, Your Interfaith Wedding.